Tunisian woman, 27, is handed a six month jail sentence for ‘offending religion’ over Facebook parody linking the Quran and coronavirus

A Tunisian court has sentenced blogger Emna Chargui to six months in prison and a £560 fine for reposting a Facebook joke about the coronavirus written as if it was a Koranic verse.

The 27-year-old was found guilty of offending religion and ‘incitement to hatred’ in a May 4 satirical post entitled ‘the Corona Surah’, mimicking the Quran in reference to the illness.

‘There’s no difference between kings and slaves, follow science and ignore traditions,’ a passage reads.

Chargui, who is not in custody, has three weeks to appeal

‘This is unfair and unjust … this proves that there is no freedom here,’ she told Reuters from home where she had been waiting for the ruling.

Chargui’s sharing of the post in May angered some conservative social media users who demanded punishment in a nation periodically polarised between secular and Islamist political wings since a revolution that introduced democracy nine years ago.

Emna Charki, a 27-year-old Tunisian charged with offending common decency and incitement to violence, arrives at a court in the capital Tunis on May 28, 2020, for her first trial hearing

Court spokesman Mohsen Dali said the sentence was on charges of inciting hate between religions and races.

The case has brought criticism from rights groups.

Saying she was a victim of a ‘repressive law’ that curtailed free speech, Amnesty International said the prosecution did not allow Chargui’s lawyer to accompany her to court, where she was asked about her religious beliefs and mental condition.

Amnesty also said that Chargui received ‘messages from people threatening to kill or rape her’, and that the authorities failed to take action or to investigate the threats. 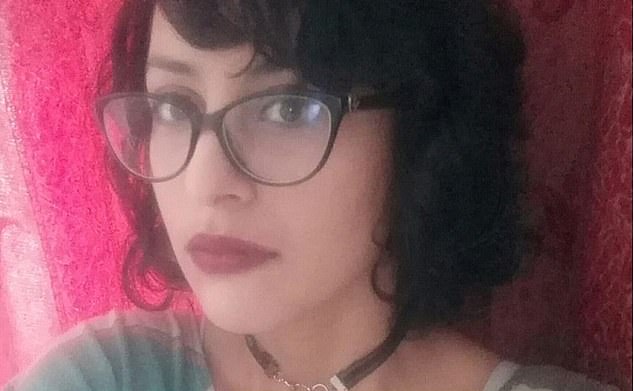 Saying she was a victim of a ‘repressive law’ that curtailed free speech, Amnesty International said the prosecution did not allow Chargui’s lawyer to accompany her to court, where she was asked about her religious beliefs and mental condition

‘It is unacceptable for someone to face a prison sentence of up to three years just for sharing a satirical post on Facebook,’ they wrote.

‘Such a trial sends a message that anyone who dares to express a controversial view on social media runs the risk of being punished.

‘We are calling on the authorities to immediately end her prosecution, investigate the worrying death and rape threats she has been receiving, and ensure she is protected.’