Turban ripped from head of Indian Sikh outside Parliament

A Sikh man waiting near the Houses of Parliament had his turban ripped from his head in a sickening racist attack.

Ravneet Singh was waiting outside Portcullis House to meet Labour MP Tanmanjeet Singh Dhesi when he was targeted by a racist screaming: ‘Muslim go back.’

The 37-year-old, a prominent Sikh environmentalist from Punjab, India – who is a Sikh and not a Muslim – said his attacker then attempted to pull his turban from his head.

Ravneet Singh was waiting outside Portcullis House to when he was targeted by a racist screaming: ‘Muslim go back’ who attempted to rip his turban from his head 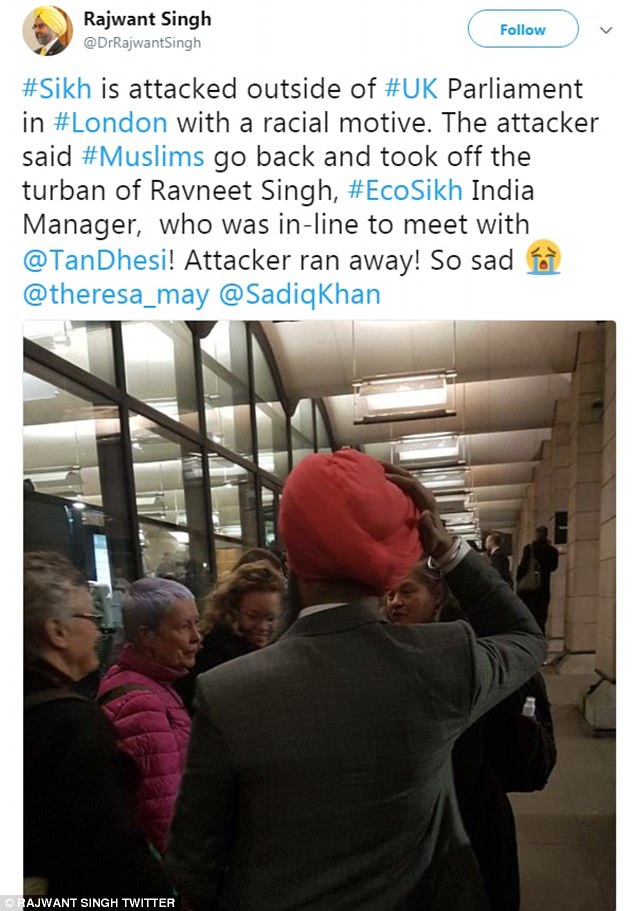 An image of the assault was posted on Twitter by Dr Rajwant Singh, the founder and President of the EcoSikh organisation, which Ravneet Singh works for

‘What is a hate crime and is it on the rise in the UK?’

Hate crime is defined as an act of violence or hostility directed at people based on disability, race, religion, transgender identity or sexual orientation.

The number of hate crimes recorded in the UK rose following the EU referendum and the Westminster Bridge terrorist attack on 22 March 2017, according to the Home Office.

When something is classed as a hate crime, a judge can impose a tougher sentence on the offender under the Criminal Justice Act 2003.

According to Home Office statistics, in 2016/17, there were 80,393 offences recorded by the police in which hate crime was deemed a motivating factor.

An image of the assault was posted on Twitter by Dr Rajwant Singh, the founder and President of EcoSikh, an organisation which helps to promote better awareness of environmental issues around the world.

Mr Singh told The Independent the man ran up to him before launching the unprovoked attack.

He said: ‘He was pulling at my turban strongly. It half moved and I grabbed it.

‘Before he could do anything else I shouted at him and he ran.

‘He made a racist comment in another language that I didn’t recognise.

‘He was a white man, but he didn’t sound English.

Mr Singh added: ‘He held my turban with both hands and kept shaking it.

‘My turban was almost down to my face. Then he also tried to injure my neck.

‘I kept shouting what’s this, stop it. He did not budge. Soon security guards were there and he ran away.’

The abhorrent assault prompted outrage among social media users, including Mr Desi, who was due to meet Mr Singh and his colleague to discuss plans for the upcoming World Sikh Environment Day.

Mr Desi, the Labour MP for Slough, told MailOnline: ‘I am disgusted that someone filled with hatred tried to pull off the turban of one of my guests.

‘While consoling Ravneet, I felt embarrassed that he would be left with a personal scar from his visit, while also giving him a negative perception of our country.

‘It has been pointed out previously on several occasions to the Government that their hate crime action plan totally ignores Sikhs. Given such incidents, the Government needs to address this genuine community demand to properly monitor and record hate crime against Sikhs. 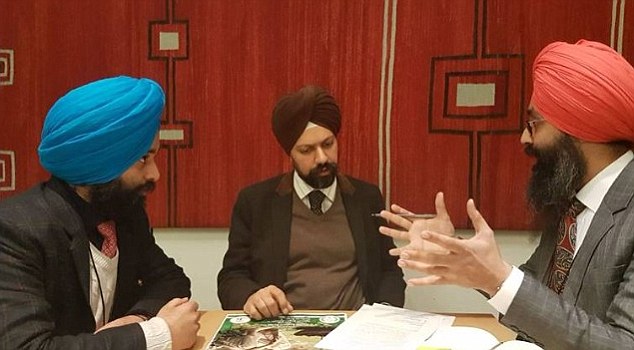 ‘I had experienced a similar attack when at school, but thought at the time that maybe that was due to the perpetrator ‘being a kid’ and not realising the importance of a turban for the Sikh identity.

‘Sikhs regard the turban as a crown on their head. I was distressed when I had to deal with such racist behaviour, but coped thanks to family and friends. Unfortunately, many children and adults have to experience this all too often.

‘These types of incidents harm the victim’s confidence and self-respect, and not only cause distress to the individual but also show our country in a bad light. We need to work together to remove this evil and discrimination from our society.’ 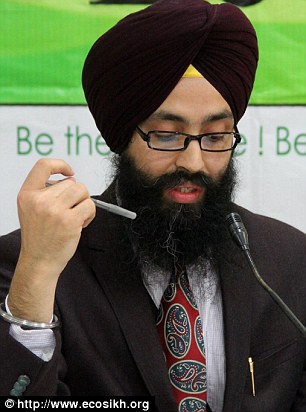 Mr Singh is a prominent Sikh environmentalist from Punjab, India

Mr Singh is the South Asia project manager for EcoSikh and is in the UK on a three week trip to discuss the group’s work.

A Metropolitan Police spokesman said officers were called at 5.20pm last night to reports of a man being assaulted outside Portcullis House.

They said no arrests have been made and their enquiries are ongoing.

Portcullis House is opposite the Houses of Parliament, and home to the offices for MPs and their staff.

Bhai Amrik Singh, the Chair of the Sikh Federation (UK) told MailOnline: ‘Sikhs are the most visible ethnic minority, especially those who wear turbans and been subject to unacceptable levels of hate since 9/11.

‘However, the hate crime action plan published by the government in July 2016 after the Brexit vote woefully failed the Sikh community by neglecting to acknowledge hate crimes against Sikhs.

‘The Sikh community were ‘invisible’ and not consulted in drawing up the plan that focused primarily on the more vocal Muslim and Jewish communities.

‘We have been waiting for nearly two years for answers and a response from government.

‘The Home Secretary and Communities Secretary will be aware of this incident outside Parliament, but we fear they will continue to turn a blind eye on attacks on Sikhs.’