Leaders of Russia, France and Germany have gathered in Istanbul for a summit with Turkish President Erdogan as they look to bring an end Syria’s civil war.

More than 360,000 people have died in the Syrian conflict since 2011, including seven civilians killed by Syrian fire in Idlib yesterday.

Idlib in northern Syria is the last major rebel-held bastion and a fragile ceasefire was reached last month when Russia and Turkey agreed a buffer zone around the area.

But violence in the area has escalated in the lead-up to the summit, amid fears of a government onslaught which could spark a fresh wave of refugees fleeing to Turkey.

The summit comes in the shadow of the Jamal Khashoggi crisis which has engulfed the Middle East since the journalist was killed in Istanbul on October 2.

Erdogan is expected to discuss the Khashoggi affair in one-on-one talks with leaders on the summit’s sidelines.

The Turkish President has demanded answers from Riyadh while Merkel has halted German arms sales to Saudi Arabia.

However Macron has resisted calls for France to follow suit, saying the weapons trade ‘has nothing to do with Mr Khashoggi’.

It also follows months of tensions between Moscow and the West over the poisoning of Sergei Skripal in Britain and an attempted cyber-attack on a Dutch lab.

In addition Merkel and Erdogan have frequently clashed over the refugee crisis, democratic freedoms in Turkey and the millions of people of Turkish origin who live in Germany.

Turkey and Russia have held previous talks with Iran on the Syrian conflict, in efforts that have often been greeted with suspicion in the West. 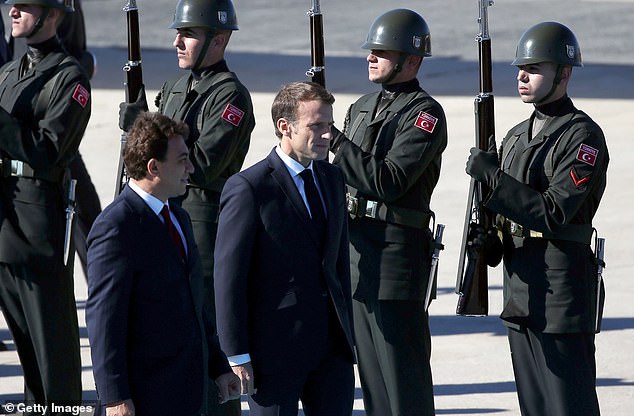 French President Emmanuel Macron arrives at Ataturk International Airport ahead of the ‘Four-way Istanbul summit on Syria’ with Merkel, Erdogan and Vladimir Putin 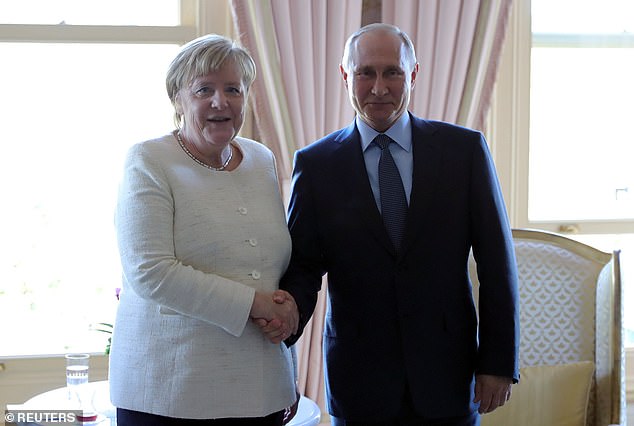 Merkel and Putin shake hands at the Istanbul summit, which also follows months of tensions between Moscow and the West over the poisoning of Sergei Skripal in Britain

But Saturday’s summit will be the first to include the European Union’s two most significant national leaders.

Turkish presidential spokesman Ibrahim Kalin said on Friday that the primary goal would be to ‘clarify the steps to be taken for a political solution and to determine a roadmap’.

The steps could include a a commission to create Syria’s post-war constitution, seen as a stepping stone to staging elections in the war-torn country.

A United Nations plan for a committee to draft a new constitution ran aground this week after Damascus blocked the proposal, provoking anger among western powers.

The Istanbul talks will also discuss extending the ceasefire around Idlib, where aid groups have warned that a military offensive could spark one of the worst humanitarian disasters of the seven-year war.

Moscow and Ankara agreed a buffer zone as Turkey sought to avoid an attack leading to a further influx of people across its border. 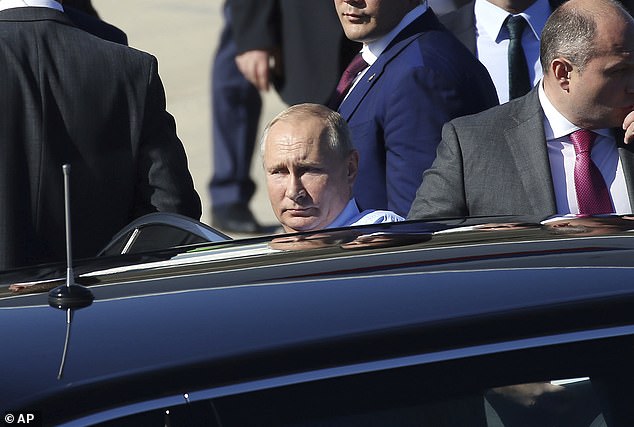 Vladimir Putin arrives in Istanbul to attend the summit on the Syrian conflict. Russia supports the regime of Syrian President Bashar al-Assad while Turkey backs the rebels 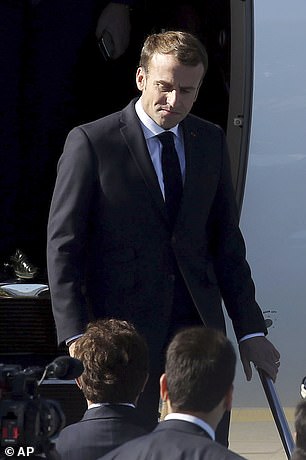 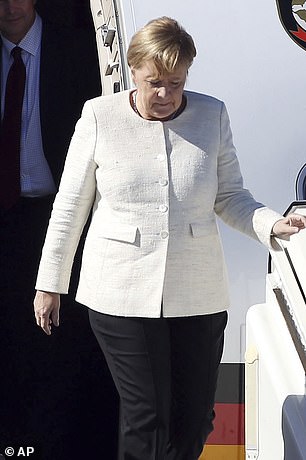 Emmanuel Macron (left) and Angela Merkel (right) get off their respective planes as they arrive in Istanbul on Saturday. They have taken different approaches towards Saudi Arabia

Syria’s opposition, which has previously described Russia’s military intervention in 2015 as an occupation, on Friday said it welcomed dialogue with Moscow.

The Elysee palace said there were ‘modest expectations’ and Putin’s spokesman Dmitry Peskov urging all sides to be ‘realistic’.

Meanwhile German Defence Minister Ursula von der Leyen said that ‘reconstruction to the profit of the dictatorship of Assad is not conceivable’.

‘There will be only investment into Syria if there is a satisfying political process that includes all parties,’ she told a security conference in Bahrain on Saturday.

At the same conference, US Defence Secretary Jim Mattis said Russia is no replacement for the United States.

‘Russia’s presence in the region cannot replace the longstanding, enduring, and transparent US commitment to the Middle East,’ Mattis said.

The leaders of Russia, France and Germany arrived in Istanbul on Saturday for a four-