Turkey’s Med coast is as welcoming to families as ever: There’s never been a better time to head dash off to Kalkan

No holiday is complete without the animal adoption showdown, that moment when the children demand we take home some dog or cat they have found in the street and their cruel father says ‘no’. This, though, was the first time I’ve had to refuse a turtle.

I wasn’t even aware that there were turtles in the Mediterranean until we came to Kalkan, in south-west Turkey.

But to bump in to one, then swim with it for the best part of an hour, was just one of many surprises in a spot that manages to combine the dramatic beauty of the Amalfi coast and the bohemian charm of Ibiza at half the price of either.

Lovely: The harbour in Kalkan has maintained much of its historic ambience

Political upheavals may not have helped Turkey’s image but, perversely, they mean there has never been a better time to head for a place like Kalkan. It started life as a (Greek) fishing village, but unlike, say, St Tropez, has managed to retain much of that original ambiance with steep streets meandering past whitewashed houses.

A seafront cappuccino costs just £2, a beer £3, though what you really want is Turkish limonata. Throughout our stay, my children — aged ten, eight and five — ordered nothing but this fabulous lemonade. Why can’t the rest of Europe serve this instead of Fanta?

We booked through Simpson Travel. They suggested Korsan Suites, an enclave of villas and apartments perfect for families. We had a villa with three en-suites, two terraces staring out to sea and our own Jacuzzi, all inside a small bougainvillea-draped complex with a pool and restaurant.

A vast breakfast and a nothing’s-too-much-trouble concierge service is included.

It’s a short walk down the hill to the centre of a town which claims to have more restaurants per person than anywhere in Turkey. What’s more, the Turkish lira is much kinder than the euro.

With only a small public beach, people spend their days at beach clubs dotted around the bay. 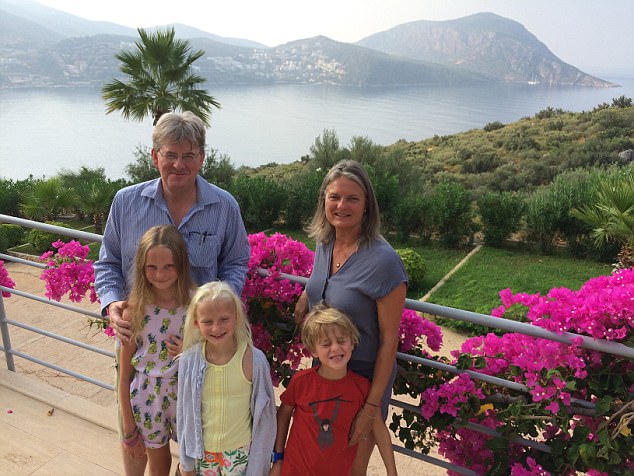 Much to like: The Hardman family were thrilled by the turtles they found on the beach in Kalkan

Most run a free ferry shuttle from the harbour and provide loungers, umbrellas and towels for a modest fee. Easily the prettiest is the Villa Mahal, attached to a romantic boutique hotel perched on the rocks. If you want turtles for company, this is the place.

Simpson also arranged a hire car through a local Kalkan firm. It really was painless with no queue and no arguing over a scratch on the hubcap.

It meant we could explore inland, driving up to the hill village of Islamlar, famous for its trout.

My trout went from river to plate in 20 minutes for the equivalent of £1.

Kalkan is just a 20-minute drive round to Patara Beach, one of the longest in Europe. The only man-made structures along its eight miles of sand are a small cafe and the well-preserved ruins of a Roman town. I’m ashamed to say we spent longer in the boutiques of Kalkan than the ruins of Patara. Despite my pleas for restraint, there was much buying of earrings, bracelets, bags and flip-flops.

Still, we made it home without the turtle.