This is the moment a car wash owner appears to tie his apprentice to a chair and jet spray him with a pressure washer.

Turkish police are said to be investigating the incident after the video went viral upsetting locals who filed complaints about the unfair disciplinary procedure.

The unnamed businessman reportedly carried out the punishment at his car wash in Sivas, central Turkey because the young staff member was not working quickly enough. 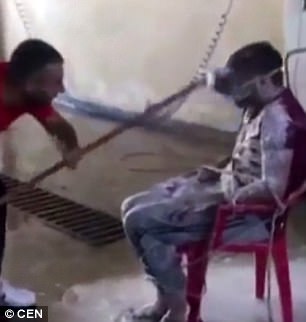 A witness with a smartphone filmed the incident and later shared the footage of video sharing platforms.

The footage begins with the apprentice tied to the chair and a man using a brush to cover him in foam.

A second man then walks over with the jet wash and sprays hoses him down with the powerful jet spray.

Local officials launched an investigation after they were made aware of the footage online.

A local police spokesperson said: ‘A legal and administrational investigation has been launched after the video was seen in the media and on social media of the car wash owner tying his apprentice to a chair and washing him with pressure water.’

The car wash owner said that the incident was only intended as a joke but the footage has been widely criticised online. 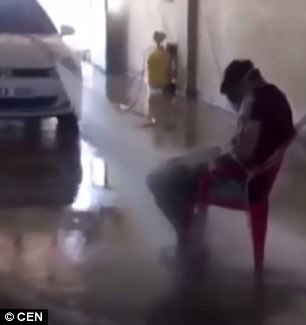 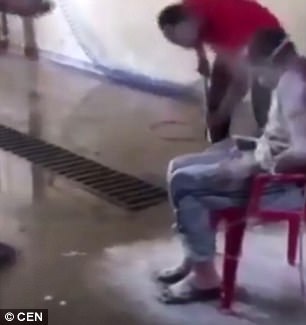 One person, Ozcan Sahin, said: ‘Dirtbag, he should be arrested immediately’.

While another added: ‘Nothing good is going to happen anymore, there is no hope.’

Another said: ‘We have lost our humanity, this shameful case is enough. But most probably in a couple of days we will hear another story just like this.’