This is the moment a firefighter gives the kiss of life to a small dog on the pavement after recovering the body from a burning home.

The attempt, which was ultimately in vain, took place in Istanbul, Turkey, after a fire broke out in a first-floor flat.

According to reports, the blaze started in one of the bedrooms and firefighters were called to the four-storey building to put out the flames. 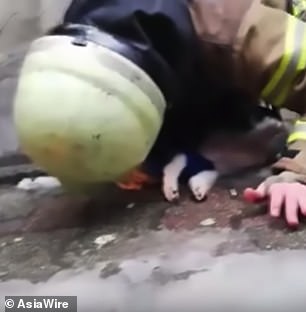 An unidentified firefighter desperately tries to give CPR to a dog found collapsed inside a flat in Istanbul, Turkey

Inside the burning flat, one kind-hearted fireman found a dog collapsed on the floor that had been affected by the smoke, and immediately rushed it outside into the fresh air.

He then tried to save its life by administering CPR and the kiss of life although ultimately without success.

Although reports are unclear, it is believed that the dog was alone in the flat at the time of the fire.

In the video footage, the firefighter is seen compressing the small dog’s chest as it lies on the pavement with its eyes closed.

He then performs mouth-to-mouth resuscitation on the pooch, but it remains unresponsive to the firefighter’s efforts.

Social media users praised the man for trying so hard to save the little dog’s life.

Caner Erin said: ‘Well done! You sure know how to be a decent human being.’

‘Handan Tokat’ wrote: ‘You are a beautiful man who takes action instead of doing nothing’.