TV correspondents face danger they told others to avoid

They have spent days warning the public to get out of harm’s way as Hurricane Irma roared towards the coast of Florida.

But these reporters threw caution to the wind by placing themselves in the middle of the storm to capture dramatic footage of its path of destruction through the state.

Footage shows weather correspondents being lashed with rain and trying desperately to stay upright as they gave live updates of the hurricane.

One reporter, Ryan Young for CNN, tied a rope to a cement post so he could grab hold of it if the gusts became too much.

Ryan Young (pictured) for CNN, tied a rope to a cement post so he could grab hold of it if the gusts became too much

Another reporter, NBC’s Gabe Gutierrez, was forced to flee when a tree limb crashed to the ground behind him.

Several journalists stationed outside sought the relative security of building balconies that blocked some of the wind or, like NBC’s Kerry Sanders, a concrete parking garage.

Yet many felt they couldn’t truly convey the storm’s power without showing themselves getting buffeted by the elements.

The rain ‘does seem like it’s getting shot through a fire hose at you,’ said CNN’s Chris Cuomo, assigned to Naples, Florida, as the intense eye wall passed over him.

NBC’s Miguel Almaguer had a yellow tow line, one end wrapped around his waist and the other around a concrete pillar, to steady him as he did a live shot. ABC’s Gio Benitez also employed a rope as he stood on a balcony. CNN’s Kyung Lah gripped a metal railing. 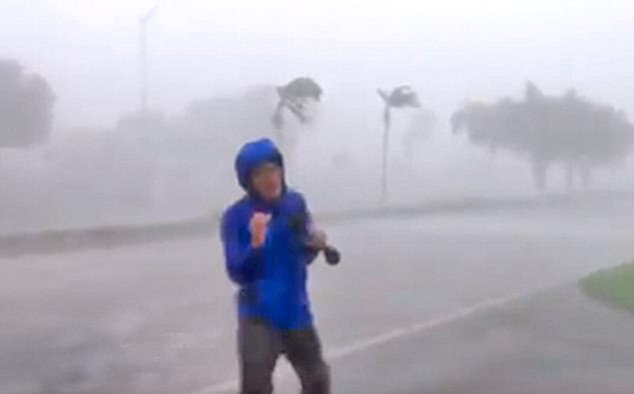 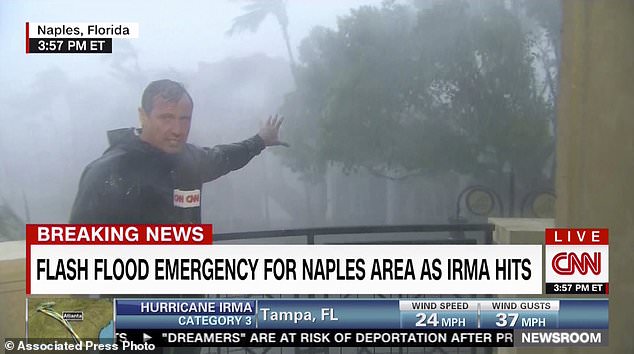 Other correspondents frequently struggled to keep their footing. ‘I’m just taking a knee for a second,’ said Sanders said when the wind got too intense.

The wind blew The Weather Channel’s Mike Bettes four or five steps as he stood outside in Naples. But for a nerdy meteorologist, there was a payoff when he spotted a glimpse of the sun as the hurricane’s eye passed over him.

‘After getting beaten and bruised and battered, there is the eye,’ he said. ‘That is nice.’

Bettes’ Weather Channel colleague Mike Seidel, stationed in Miami, seemed a gust away from real danger as he stationed himself on a dock overrun by water, as wind whipped around. He eventually thought better of it.

‘We’re going to be packing up and moving to higher ground,’ he said. 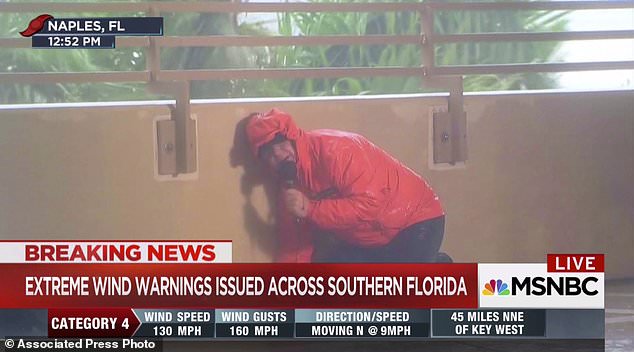 MSNBC’s Kerry Sanders shelters from the wind as he reports on Hurricane Irma in Naples. Florida

Fox News Channel’s Steve Harrigan earned the assignment to stand outside in a hurricane on his birthday. 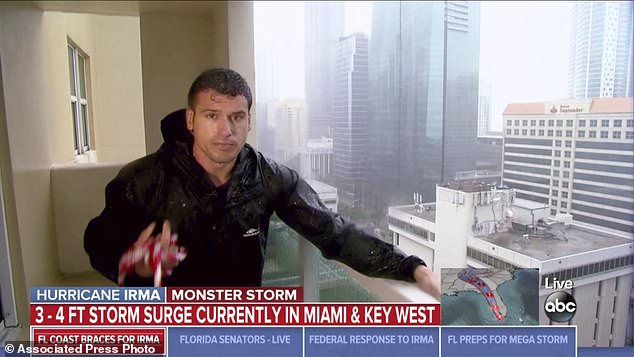 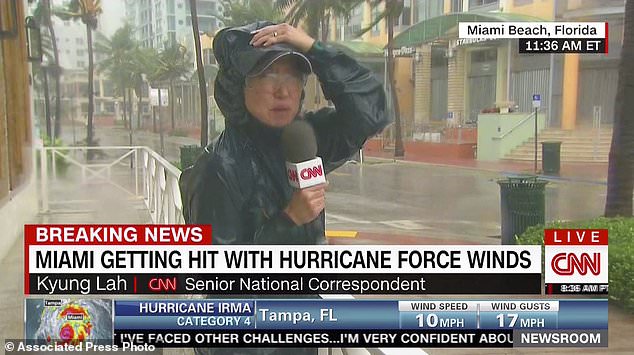 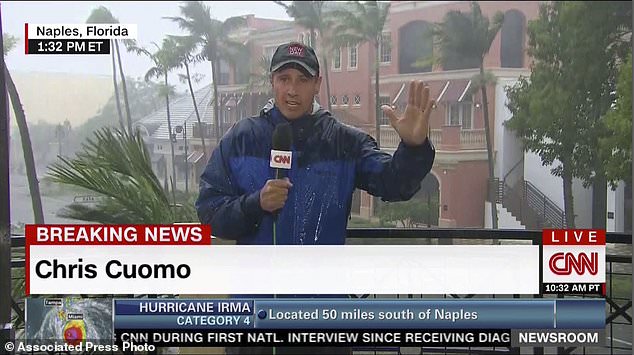 After a couple of hours getting water blown in his face, CNN’s Cuomo was comfortable enough to offer advice to a colleague on positioning himself for a live shot: don’t stand with your back to the wind.

Cuomo’s experience passing through the Irma’s eye offered some of the coverage’s most fascinating moments.

Only minutes after getting hit by the worst of the winds, he found himself standing on a Naples street during a period of eerie calm. The palms stood limp beside him.

He consulted with meteorologist Chad Myers, who was stationed in a dry studio reading maps and estimating how many minutes Cuomo had until the wind would return, this time from the opposite direction.

‘Now I get why people get lulled into a false sense of security,’ he said, ‘because it does feel like it’s over.’

It wasn’t. The danger hadn’t passed for journalists or Florida, particularly as the challenge to capture storm surge added a fresh layer of risk.