A year on from her marriage split, TV favourite and fitness guru Davina McCall is enjoying being selfish, revelling in her resilience and getting a kick out of being an embarrassing mum. She tells Elizabeth Day what makes her feel sassy every single day

Davina McCall recently picked up her 15-year-old daughter Tilly from school wearing one of her favourite winter coats.

‘I get it out every year – it’s by Prada, it’s big, it’s fake fur, it’s bright green,’ Davina says. ‘And I turned up to school and she just went: “No.”’ At this point, Davina breaks off and does a startlingly good impression of a teenage girl emitting a death stare. ‘Just the one word came out of her mouth. And she went, “No. It’s got to come off. You’ve got to take it off. I’m not going to the dentist with you in that coat.” I’m like, “Yeah, you are.”’

Davina grins. ‘We’ve got a lot of bantz. And she’d kill me for using the word bantz… She annihilates me, literally hourly. But, yeah, I’m the embarrassing mother. I do feel as though it is my job title.’ She shrugs. ‘I have to embarrass them a bit.’

You can tell that Davina would never have taken off the coat. It’s not just a question of humiliating her teenage daughter for fun; this is a woman who knows herself well enough to do exactly what she wants.

At 51, Davina says she feels unapologetically ‘badass’. She has been through a lot – addiction to drugs and alcohol in her teens and early 20s, estrangement from her mother, the death of her beloved elder half-sister Caroline in 2012, her father’s diagnosis of Alzheimer’s in 2016 and last year’s divorce from her second husband Matthew Robertson, with whom she has three children: Holly, 17, Tilly, 15, and Chester, 12.

If you tell me not to do something, I’m going to
do it

‘There are so many positive things that I could say [about the divorce] but I just can’t talk about it because of our kids,’ Davina says. ‘And also I’m really conscious of the fact that Matthew isn’t famous. So I could be shooting off willy-nilly about stuff, but where’s he going to vent his feelings? It’s not really fair on anyone. And my truth isn’t his truth and his truth isn’t my truth. And more than anything, with a 17- and a 15-year-old… they read stuff and they are aware of it and I just don’t want them to have to see that.’

Throughout all the ups and downs, Davina has kept working. As a television presenter, she has been indelibly associated with key cultural moments in the national psyche. It was Davina who announced that Nadia Almada, the first transgender person to appear on a primetime reality show, had won Big Brother in 2004. It was Davina who anchored Channel 4’s The Jump, in which a host of celebrities would hurl themselves off an alpine mountainside, breaking bones and reputations while attempting to learn a variety of winter sports including how to ski jump. And it is Davina who reunites adopted children with biological parents in weepy reunions for ITV’s flagship series Long Lost Family and who hosts the quiz show The 100K Drop, guiding contestants through a nail-biting series of questions as they attempt to cling on to the prize money.

Along the way, she has also reinvented herself as a fitness guru, releasing chart-topping workout DVDs that shift millions every year (her latest, Power Box & Tone, came out on Christmas Eve) and completing a gruelling 2014 Sport Relief triathlon, swimming across icy lakes and running through rain and snow with such exhaustive grit that even watching it on television felt like an act of endurance.

‘Age is nothing,’ Davina says. ‘It’s just confidence.’ She is warm in manner, easy to talk to and ready to laugh at herself. When I walk into ITV Studios in Central London, she immediately hugs me even though we’ve only just met. Like everyone else, I automatically think I know her, too. On screen, as in real life, Davina’s greatest asset is her approachability. It always feels as if she is on your side, so it’s little wonder that her fitness DVDs have proved popular: if anyone is going to encourage you to do 12 more squats in your living room and reboot your fitness for the new year, it’s probably going to be her.

Almost as soon as I sit down, Davina is already telling me all about her new invisible braces and how she went to the orthodontist with her daughters and while they were getting their teeth fixed, decided she wanted hers done as well. The braces push her mouth out slightly – ‘this is what it would look like if I had my lips done’, she says breezily – and when someone arrives with a mug of builder’s tea, she puts one hand over her mouth and slips off the braces in front of me. 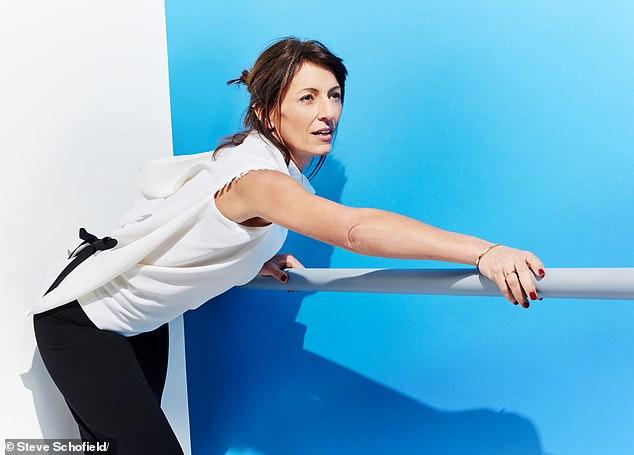 She is beautiful but it is a beauty that often gets overlooked in her slightly ditsy, energetic TV character. In person, her cheekbones are pronounced, her skin is clear and when she smiles, which she does often, a radial smattering of crow’s feet appears at the corner of each eye and makes her even prettier.

‘Matthew and I made three great kids. But I’ve done it now, so you start looking for something completely different. So you’re not thinking about beauty as far as attracting the father of your children any more. I mean, on a purely selfish level I guess I’m just thinking about what makes me feel good. Which is so nice, right?

‘So, I got up this morning and I thought, “I’m going to go kick-ass today.” I’m wearing leather trousers, I’ve got my trendy boots on, I’ve got my Dennis the Menace-like lovely jumper from Barbara Bui [she is wearing an oversized red and black striped mohair sweater]. And obviously matching underwear, that’s a thing I always do.’

‘Every single day. It’s beautiful, sexy underwear. All different colours, but always matching. Because it makes me feel sassy. And I’m not doing it to impress anybody. I’m doing it for me.’

There was a furore recently when Davina posted a picture of herself in a bikini on Instagram and was instantly criticised for appearing too thin. She refers to the episode now with a slight eye-roll as ‘thin-gate’ and says that her immediate response was not to cower away and feel as though she’d done something wrong, but to say, ‘“OK, you think I’m too thin? I’m going to post a lot of pictures of myself in bikinis.” That’s what I’m like. Tell me not to do something and I’m going to do it.’

This wildness is a hangover, perhaps, from her youth. Her French mother Florence, who died ten years ago, left Davina at the age of three to be raised by her grandparents in Surrey while she returned to France. After that, Davina only saw her during the school holidays. On one occasion, her mother took the 13-year-old Davina to a sex shop. It was, she says, ‘absolute chaos’ and she spent a lot of time wishing her mother could be ‘like Angela Lansbury’, the homely actress who starred in Murder, She Wrote. ‘My mum was a great person. She’d dip in and out and she was really good fun and was quite wild and everything, but she just couldn’t be a mum.’

Davina has said previously that part of her drive to be famous was to make her mother realise she was worth something. But during her late teens and early 20s, while she was struggling to make it in television, Davina turned to drink, drugs and clubbing in an attempt to numb the pain of her past. She took heroin before ending up at a Narcotics Anonymous meeting and finally getting clean. She’s been sober for 25 years.

She remembers, as a recovering addict in her 30s, when she was newly married and having her children, ‘I’d look at other young mums and I’d think, “Oh my gosh, you all seem so lovely and I feel as though I’ve lived this mad life, and I’m only a few years clean. If you only knew what I’d been through or what I’d done.”’

My fitness isn’t a vanity project, it’s a ‘stay alive as long as you can’ project

It’s only as the years have passed that this feeling has waned. Davina is a great believer in the power of renewal. ‘As I’ve got older, I feel more carefree because my kids are good, they’re growing up well. I feel as though everything is all right on that front.’ This is a big part of the reason for her drive to reinvent herself and get healthy. For Davina, fitness is not about thinness. It’s about strength.

‘My sister died at 50,’ she says quietly. Caroline, who was diagnosed with incurable cancer in 2012 at the age of 50 and died just weeks later, was also Davina’s ‘best friend’. The thing she most fondly remembers is Caroline’s obsession with magazines. At her funeral, they covered her coffin with copies of Inside Soap and TV & Satellite Week magazine.

When Davina turned 50 in 2017, the age her sister had been when she died, ‘that was a big one for me… I see my fitness now not just as a vanity project, I see it as a “stay alive as long as you can” project. I think when you’re in your 20s and 30s, you’re not thinking about it in those terms. You’re thinking, “I want to be able to wear a strapless dress and for my arms to not wibble wobble.” When you get to 50 it’s more, “I don’t want to get heart disease, I want to keep my cholesterol low, I want my blood pressure to be good.” All of these things, you know? Diabetes, all of it. I mean, cancer… after smoking, the biggest cause of cancer is obesity. I just want to be health-aware. That’s what I’d call it. So fitness is part of being health-aware for me.’ 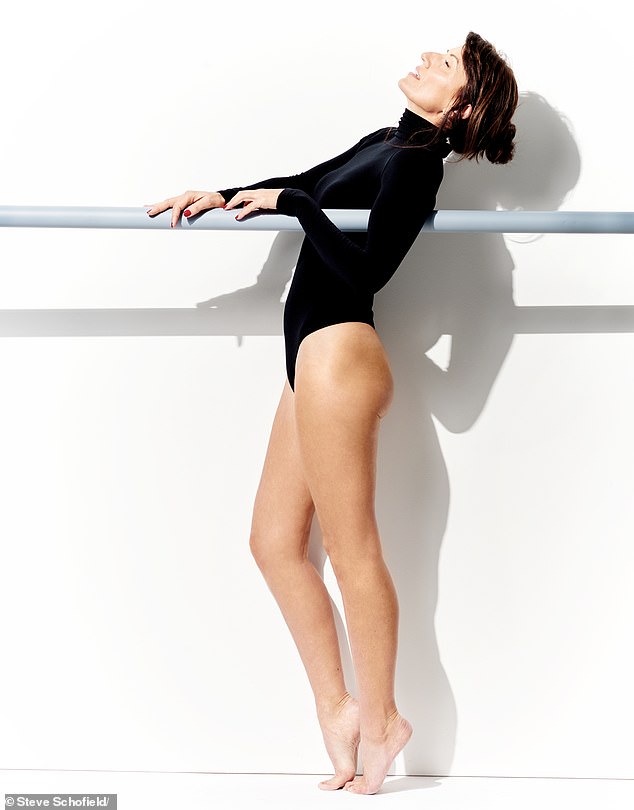 Despite the fact that she has lived many lives in her half-century, Davina is neither bitter nor pessimistic. She values the tough times for what they have taught her and constantly looks forward rather than dwelling on the past. ‘I wouldn’t be the person I am if I hadn’t had the life that I’d led,’ she says. ‘Whenever somebody says to me, “Well, do you really regret that? Do you regret taking drugs?” Look, I’m not pleased I did it, but I can’t regret it. I can’t go back and change anything. It is what it is and I’m not going to waste time regretting doing it because it has made me who I am… Resilience comes from hardship.’

So 2019 for Davina is going to be a year of new challenges and prospects, and probably quite a few embarrassing wardrobe choices when picking up her daughter from school. Her New Year’s resolution is to complete her qualifications to become a certified personal trainer. Other than that, she’s going to see where life takes her next.

‘I’ve always believed I’m a work in progress,’ she says, finishing her mug of tea and putting her braces back in. ‘I do feel as though I’m progressing quite nicely at the moment.’

I don’t doubt for a second that Davina can do anything she sets her mind to – and she’ll probably do it all while wearing a bikini, well into her 70s, while posting photos, too. Just don’t try to tell her that she can’t.