‘You can Google me … I’m the real deal OK’: Colourful TV journalist faces trial accused of blackmailing the masterminds of an elaborate million-dollar tax fraud

A veteran Sydney journalist’s threat to expose the masterminds behind an alleged million-dollar tax fraud was done to blackmail them, a jury has head.

When Stephen Barrett listed his 39 years of reporting credentials for Channel 7, Channel 9 and ABC investigations in a meeting recorded by police, it wasn’t purely for journalistic purposes, crown prosecutor Patricia Mcdonald said in her opening address.

The surveillance device installed in Clamenz Lawyers firm at the MLC building in Sydney picked up Barrett talking about a ‘very serious story I want to investigate’.

Veteran Sydney journalist Stephen Barrett’s (pictured) threat to expose the masterminds behind an alleged million-dollar tax fraud was done to blackmail them, a jury has head

Barrett, 63, has pleaded not guilty to blackmailing alleged ‘Plutus fraudsters’ Adam Cranston, Jason Onley and Dev Menon by using his media status to threaten the trio.

The Crown says Barrett was acting in a joint criminal enterprise with Daniel Rostankovski, who had a part to play in the alleged Plutus Payroll fraud, and property developer Daniel Hausman.

Plutus Payroll promised a service to pay employees’ salaries while diverting appropriate tax to the ATO. This money was funnelled through a second tier of companies headed by ‘straw’ or ‘dummy’ directors Rostankovski allegedly recruited and appointed.

A total of $105million was then streamlined into the ‘Plutus fraudsters’ accounts between March 2014, and May 2017, the NSW Supreme Court was told on Thursday.

Australian Federal Police recorded a number of conversations, installed surveillance technology and obtained documents including some from Channel 9.

In the law firm meeting recorded by one of these devices Barrett promised to ‘go the distance’ with his former colleague and former executive producer at A Current Affair Grant Williams, and said he would interview then-deputy commissioner of the ATO and Cranston’s father Michael.

‘I could even sit down with Scott Morrison the Treasurer and get his two bobs worth … or go to the opposition,’ he is recorded saying. 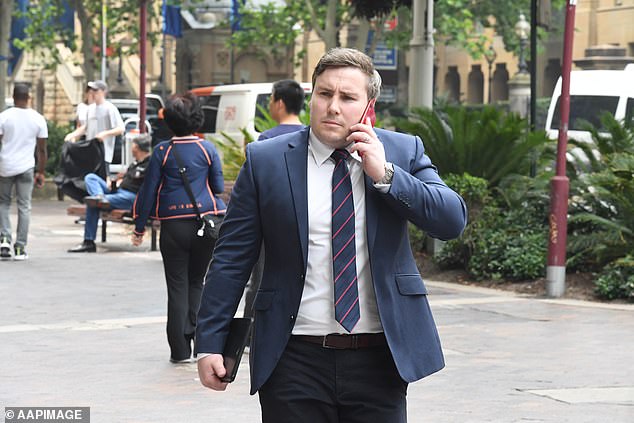 Soon after this conversation Barrett leaves the room and Rostankovski demands $5million.

The menacing threat was made by Barrett, then the unwarranted demand was made by Rostankovski, which puts them in a joint criminal enterprise, the Crown says.

Hausman is expected to give evidence later in the trial about two meetings he had with Barrett at a pub in Paddington, and a cafe in Newtown.

The plan for Barrett to ‘throw down your media card’ and say ‘you’re aching to do the story’ was laid out for him, and an amount of up to $3,000 was paid as part of his participation, the Crown says.

Barrett asked if he could pursue the story on record but was told only if ‘we’ve achieved what we want’.

The former A Current Affair producer is also expected to testify that he received a call from Barrett in January about a ‘major scandal at play,’ involving tax fraud and the son of one of the ATO’s main commissioners.

He never heard of the story again until months later.