According to his family, the Studio 10 presenter passed away peacefully on Friday night.

‘Jono and I have been soulmates for close to 40 years,’ his wife Margot said in a statement.

‘We have been fortunate to live a rich and wonderful life and I have been lucky enough to watch up-close someone with enormous talent and the special gift to make people laugh,’ she continued.

‘I will miss him beyond words and with the support of our gorgeous children, Oscar and Emily, and their partners, we will continue to live in the manner he wanted.

‘When I asked Jono recently how he wanted to be remembered, he said, “For doing a good deed every day.” Such was the generosity and caring nature of the love of my life.’ 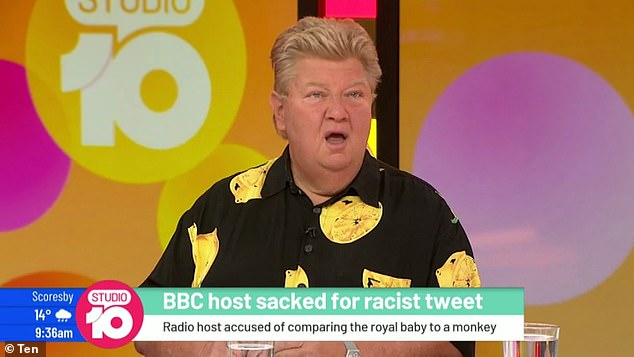 His son Oscar, also opened up about the loss by sharing a photo of himself and his late father smiling with their arms around each other.

‘Love you dad. Rest in peace,’ he captioned it.

Coleman had an illustrious career in the UK and Australia spanning both television and radio.

He got his start as a presenter in 1979 on the afternoon children’s program Simon Townsend’s Wonder World.

After stints at Triple J and Triple M, Coleman headed over to the UK to continue his radio career.

In recent years, he’s been best known for his work on Channel 10’s morning show, Studio 10.

He was diagnosed with prostate cancer back in June 2017.

In an interview with Sydney Confidential back in 2019, Jonathan revealed that his cancer had spread.

‘It has gone from the prostate and there’s some spots in my lower back and upper shoulders… but it is treatable,’ he said at the time.