A reporter screamed live on air as she was attacked by a screwdriver-wielding man yelling ‘Allahu Akbar’ while covering the Black Lives Matter protest in London.

Nine News’ Europe correspondent Sophie Walsh, 34, was assaulted while broadcasting around 9.45am this morning, according to the Australian network.

Footage was not captured of the attack but Ms Walsh can be heard screaming and seen clearly shaken afterwards while relaying the incident to one of her colleagues.

Nine News’ Europe correspondent Sophie Walsh, above, was seen clearly shaken after the attack while covering the Black Lives Matter protests in London this morning 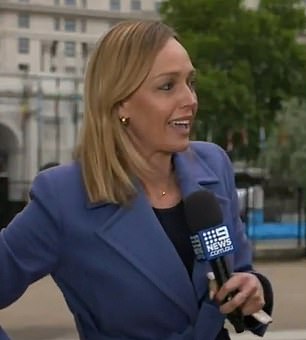 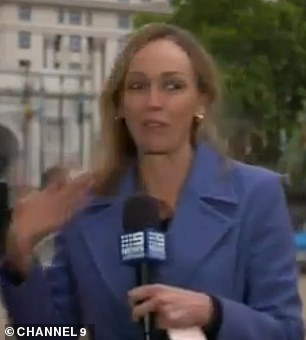 After the incident in London at 9am this morning, Ms Walsh told her colleague: ‘Sorry, I just had someone come up and try and… yeah. A man just came up and grabbed me’

She said: ‘Sorry, I just had someone come up and try and… yeah.

A fellow presenter reported the attacker ‘made motions to stab her’ with the cameraman operator and bystanders chasing him down.

Footage later shows a man being detained by two police officers and held against a car bonnet.

The network reported it is unclear whether the attacker ‘had a screwdriver in his hand or in his pocket’.

Ms Walsh later wrote on Twitter: ‘Thank you for your messages. The man has been arrested for threats to kill and carrying a weapon. I’m shaken but okay.

‘Big thanks to my incredible cameraman Jason Conduit who chased him down armed with a light stand and got him arrested.’ 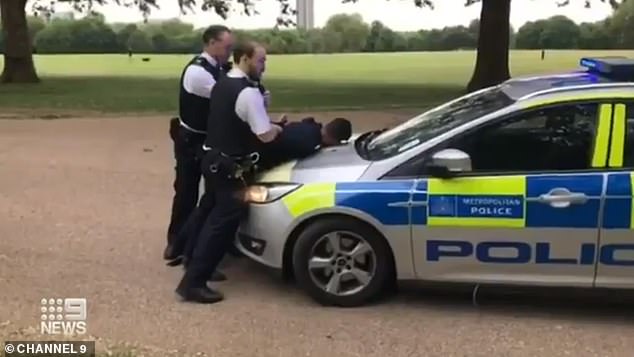 Footage showed a man being detained by two police officers, above, and held against a car bonnet. Ms Walsh later wrote on Twitter she is ‘shaken but okay’ 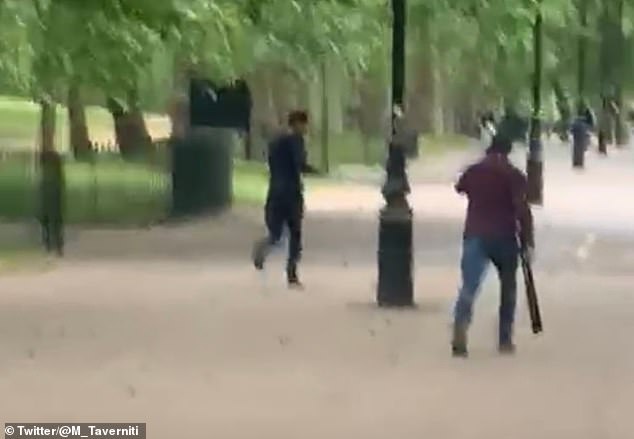 The tweet from Ms Walsh, in which she wrote: ‘I’m shaken but ok. Big thanks to my incredible cameraman Jason Conduit who chased him down armed with a light stand’

Met Police said the attack was ‘not being treated as a terror incident’.

A spokesperson told MailOnline: ‘Police were called at 09:46 on Wednesday, 03 June to Park Lane, W1 reports of an assault and a man making threats.

‘Police nearby gave chase and detained the man. No injuries have been reported at this time.

‘A man, no further details, was arrested on suspicion of making threats to kill, possession of an offensive weapon and possession of class B drugs.

‘He has been taken to a central London police station, where he remains at this time.’

It comes as thousands of Black Lives Matter protesters including singer Liam Payne and actor John Boyega gathered in the capital city today as a show of force against the death of George Floyd in the US.

The rally comes amid global demonstrations gather pace following the death of 46-year-old black man Mr Floyd who died after white police officer Derek Chauvin put his knee on his neck for nine minutes in Minneapolis on May 25. 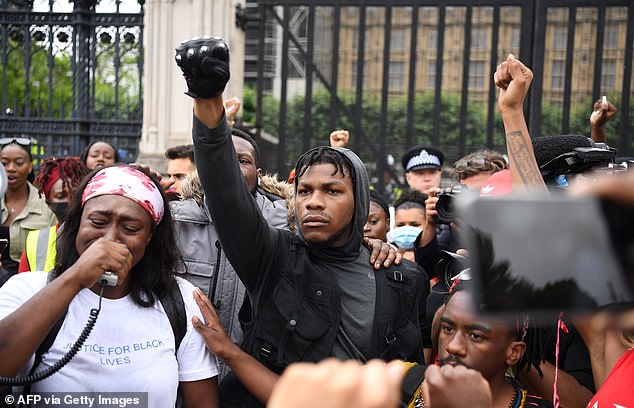 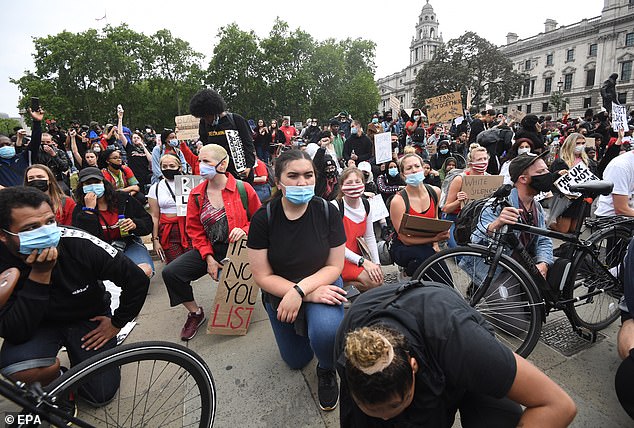 Crowds gather to demonstrate and take the knee at a Justice for Black Lives protest in front of an embassy in London this afternoon. Police were generally keeping in the background 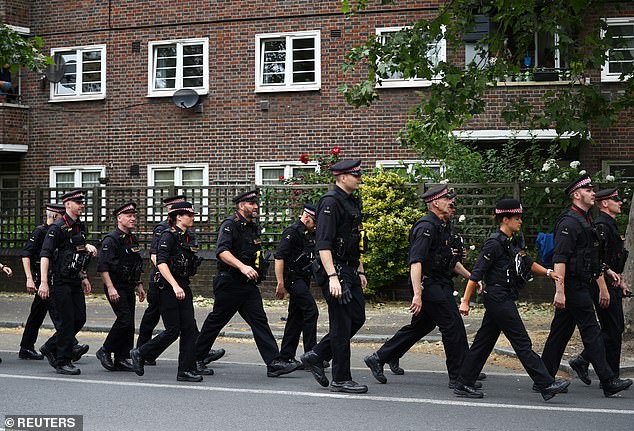 Police officers are seen walking during a Black Lives Matter protest following the death of Mr Floyd, who died in police custody in Minneapolis, US, on May 25

After leaving Hyde Park, the protesters clambered onto traffic lights as they marched down Park Lane towards Victoria and gathered outside Parliament. One supporter played Bob Marley’s Three Little Birds on a loudspeaker.

Another protester wore a Colin Kaepernick shirt after the black American footballer who started the knee protest in the US. Thousands of demonstrators at times went down on one knee chanting ‘George Floyd, George Floyd.’

Police were generally keeping in the background of the protest while helicopters circled above. Banners included ‘Enough is Enough’, ‘Remember Smiley Culture’, ‘Remember Cherry Groce’, and ‘UK is not innocent’.

It follows UK chief constables joining forces to say they were ‘appalled and horrified’ by the death and called for ‘justice and accountability’, while warning those attending protests to do so while maintaining a safe distance.

Separately, anti-racism campaign group Stand Up to Racism is urging Britons to ‘take the knee’ on their doorsteps at 6pm tonight for a protest against discrimination which is also backing the Black Lives Matter movement.