Britons’ favourite television shows are behind a rise in sales of waistcoats, flared jeans and wellington boots.

That’s according to John Lewis’s latest consumer trends report, which also says that spending more time at home has led Britons to stock up on expensive Peloton bikes, garden furnishings and tablecloths.

But it has meant they are buying fewer neckties, cosmetic treatments like make-up, and travel items such as passport holders and suitcases.

Fashion icon: DS Steve Arnott from BBC’s Line of Duty has been cited as the reason behind a 114 per cent rise in waistcoat sales between May and August

There was a dramatic shift in people’s clothing purchases, with sales of suspenders, garters and bustiers falling by a quarter, but the end of most lockdown rules in July causing year-on-year sales of swimwear sales to more than double that month.

Some fashion trends experienced a revival thanks in no small part to the small screen. Prior to series six of BBC cop drama Line of Duty being broadcast, John Lewis said waistcoat sales had plummeted by three-quarters.

Yet following the series, one of whose main characters is waistcoat-clad DS Steve Arnott, played by Scottish actor Martin Compston, there was a 114 per cent increase in demand for the garment between May and August.

Before then, 70s-set The Serpent, starring Jenna Coleman, led to a sales boost for colourful coats, flared jeans and aviator sunglasses, and Channel 4 show It’s a Sin caused purchases of 80s-style logo shirts to grow by almost three-quarters.

‘With shop windows boarded up or left empty for much of the last year, our TV screens temporarily took their place: they became our shop windows into interesting fashion and lifestyle trends,’ the company stated. 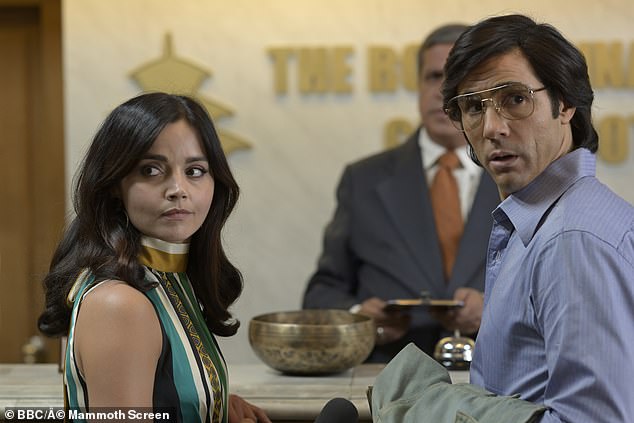 Back in time: Seventies-set crime drama The Serpent, starring Jenna Coleman (left), led to a surge in sales of colourful coats, flared jeans and aviator sunglasses

Enforced shop closures meant John Lewis’s website became more crucial. From 40 per cent before the pandemic, the share of online sales climbed to between 60 per cent and 70 per cent of sales.

Executive director Pippa Wicks said: ‘The unprecedented events of 2020 and 2021 have left a permanent mark on how we shop, live and look. People have become clearer about what matters to them, and their work-life balance has shifted towards life.’

Looking forward, the company predicts there will be more online socialising, with the purchase of goods that exist in the digital world and a continued rise in sales of nostalgic tech.

Nostalgia was credited by John Lewis for sales of green Whistles dresses quadrupling in June after the dress worn by Jennifer Aniston on Friends: The Reunion was compared to one she wore on a famous episode of the sitcom in 1996. 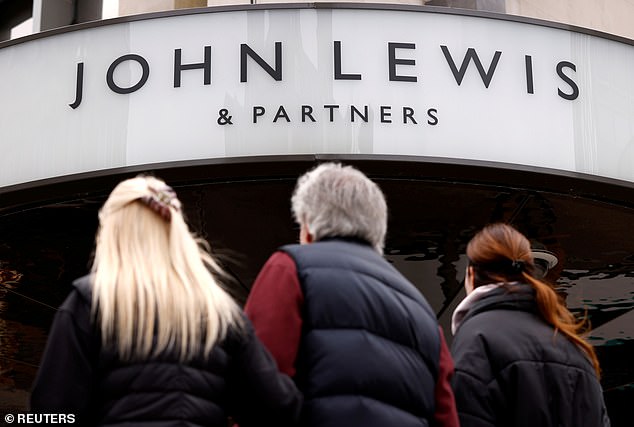 Online is best: The share of sales from John Lewis’s website have jumped to between 60 per cent and 70 per cent compared to 40 per cent before the pandemic

Sales of tablecloths surged by 79 per cent, purchases of napkins almost doubled, and there was a boom in demand for candlesticks and candlestick holders. However, sales of coloured dinnerware items outstripped sales of white dinnerware objects.

Aside from the kitchen and dining room, John Lewis further noted that those with gardens took the opportunity to spruce them up, even during the very wet summer the UK has just experienced.

It reported trampoline sales jumping by 270 per cent, hot tubs rising by about 200 per cent, and strong demand as well for outdoor rugs and modular sofas.

‘For those lucky enough to have outdoor space, their garden became their sanctuary and entertaining space over lockdown,’ the company remarked.

‘Gardens were people’s parks, their gyms, their campsites, their festival fields, their outdoor cinemas and extensions of their kitchens and dining rooms.’