A TV weatherman has stripped to his underwear to help pull a swimmer from the surf at a Gold Coast beach – moments after he finished a live cross.

Channel Nine broadcaster Luke Bradnam raced into the ocean at Narrowneck beach on the Gold Coast on Friday night moments after being asked for help by a boogie board rider.

Newsreader Melissa Downes told viewers at the end of the first news segment ‘our weatherman’ had just discovered a body in the surf.

After the break, a shirtless Bradnam appeared on air to confirm he and a boogie boarder had pulled the lifeless body of the man from the water.

The discovery came as rescue efforts continue to find British gym manager Jake Jacobs, 32, who was last seen entering the surf with a woman, 29, at Kurrawa Beach in Broadbeach – about 6km away – at 9.20pm on Thursday night.

British national Jake Jacobs, 32, was last seen entering the surf at Kurrawa Beach, Broadbeach – on the Gold Coast – about 9.20pm on Thursday night

A second unidentified body, a woman, was also found on the beach about an hour later. It is not yet known if the two bodies are the missing pair.

‘It was just an incredible moment,’ Bradnam told Daily Mail Australia after pulling the dead man from the water.

‘We’d seen this boogie board rider motioning to us from the water and he looked like he was in distress.’

‘I felt like I had to do something because there didn’t look like there was anyone else around who’d be much good.’

Bradnam, a member of Northcliffe Surf club and a strong swimmer, had been reporting on the Gold Coast’s treacherous surf conditions from Narrowneck all week. 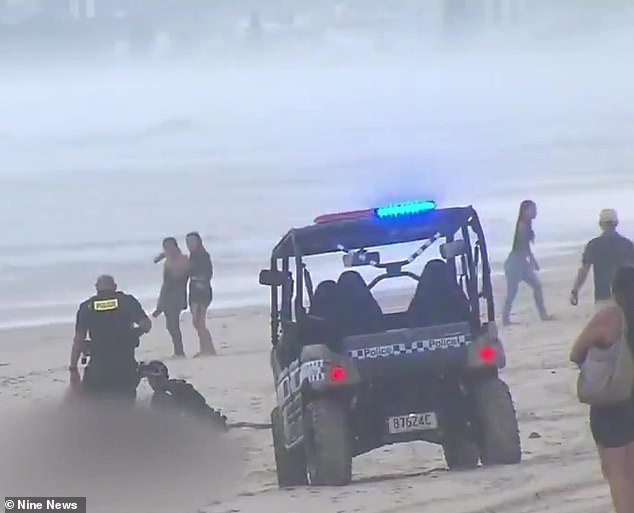 Tragedy on the Gold Coast: authorities with a body that washed up on the shore at Narrowneck beach

‘I got out there and sure enough, there’s a body face down in the water.

‘The body boarder was looking like he was in shock and I’ve never experienced anything like that. I’ve never seen a dead body before.’

‘Because I’m a swimmer I knew how to get us out the rip. I just knew to maintain my composure and get us into a position to get back to the shore.’

‘I didn’t even know if I could swim out there because I tore a muscle in my shoulder at the gym during the week and my arm is meant to be in a sling. 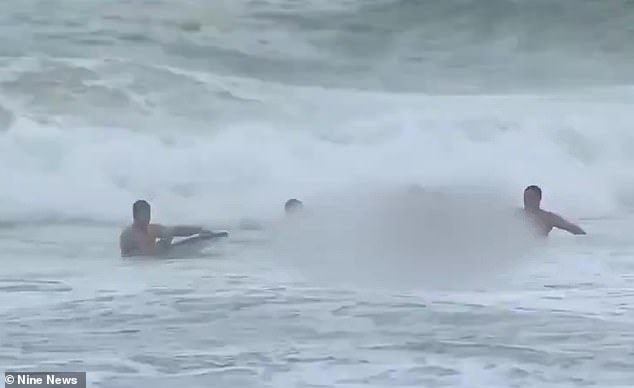 ‘It held up long enough to get him back to shore.’

He said he had the body in a ‘brother handshake’ with the boogie boarder as they brought him back to the shore.

‘Thankfully the police arrived as we got to the shore because we didn’t know what to do, there were people taking their evening stroll along the beach,’ he said.

‘I’m just happy we might be able to give closure to a family,’ said Bradnam after the ordeal.

‘Experiencing this, I have even more respect for police and ambos who do this every day.’