Care home staff have today warned they are working on the ‘forgotten front line’ of the coronavirus battle as dozens more residents fall victim to the infection.

Last night it was confirmed 12 people have died at Stanley Park Care Home in Stanley, County Durham from Covid-19 symptoms following a concentrated outbreak among residents.

Hove MP Peter Kyle said failure to do more to stop this spread within care homes amounted to a ‘crime’.

He claimed the deaths – and lack of PPE available to care staff – were ‘being swept under the carpet’ by the government.

A relative who lost a loved one at a home in Essex told The Sun the disease was ‘spreading like wildfire’ and was so contagious that relatives are banned from retrieving jewellery from the dead.

Nicola Roberts oversees three care homes in Sheffield as director of Palms Row Healthcare, where eight residents have died and 39 people – including staff – have been diagnosed.

She told Sky News staff were ‘on the forgotten front line’ of coronavirus.

The virus has claimed the lives of 10,612 hospital patients with a further 737 deaths reported in the last 24 hours.

But the true number will be higher as this figure does not include victims who died at home or in care homes.

Almost 100 care home residents are already known to have died from coronavirus, but the true figure is unknown because daily figures released by Public Health England relate only to NHS hospital fatalities.

Government guidance also says untested new residents can be admitted to nursing homes from their own homes even if they are showing symptoms of the disease.

Jayne Connery, who runs Care Campaign for the Vulnerable, said: ‘We are getting calls from families who are beside themselves. They are being told they can’t go in and see loved ones with dementia even if wearing full safety equipment and yet at the same time the homes are taking in patients with Covid-19.’

At the Government’s daily press conference at the weekend, Mr Hancock pledged that testing would increase. He said: ‘Last week we were able to open up testing to staff in care homes. Throughout this there’s been the availablity of testing with a clinical basis in care homes.’

He added: ‘Making sure we expand that testing capability both for staff and for residents – including this very difficult issue of patients leaving hospital – we are addressing that.’ 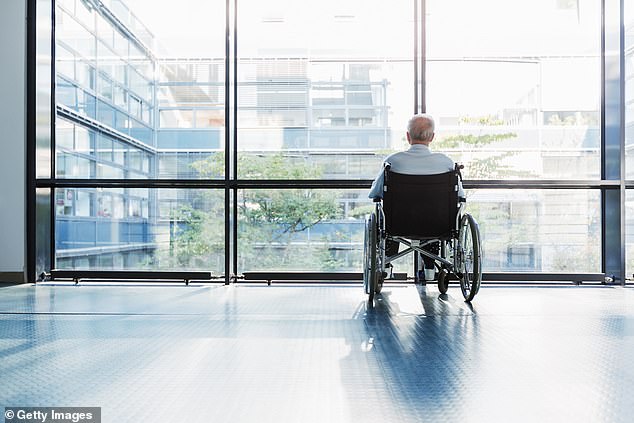 Almost 100 care home residents are already known to have died from coronavirus, but the true figure is unknown because daily figures released by Public Health England relate only to NHS hospital fatalities (file photo)

The devastating number of deaths at Stanley Park Care Home in County Durham, has been revealed after it was initially reported that seven residents had died.

News of the infection within the home emerged on Thursday as Care UK confirmed one person has died in hospital after testing positive for the disease.

A Care UK spokeswoman said the other resident who tested positive is still in hospital.

Regional Director Karen Morrison said: ‘We are completely devastated that this many residents have lost their lives to what we believe to be Covid-19.

‘Our thoughts and condolences are with all those families who have lost someone. The team at the home continue to be absolutely amazing and I cannot thank them enough.

‘Despite all that has happened, they continue to deliver the very best care in a kind and professional way.

‘They have had all the necessary PPE and have been using it meticulously ever since the first case was seen at the end of last month.’

Up to 300 people with coronavirus symptoms may have died in Scotland’s care homes, according to industry leaders.

Robert Kilgour, a care home entrepreneur, estimated the death toll as he issued a plea to SNP ministers to stop ‘dragging their heels’ and provide more financial support for the under-pressure industry.

The Scottish Government also revealed yesterday that cases of the virus are now suspected in more than a third of Scotland’s care homes.

Ministers also said figures will be published this week providing the number of suspected Covid-19 cases in homes for the elderly across the country.

Over the last week, it has been confirmed that 12 patients with suspected Covid-19 symptoms died at the Burlington Court care home in Cranhill, Glasgow, while another eight died at Castle View, in Dumbarton.

Mr Kilgour, who runs Renaissance Care, said ten patients have died following suspected or confirmed symptoms of the virus in his 15 homes. He told the Scottish Daily Mail: ‘My estimate is that there are at least 200 and possibly close to 300 suspected care home deaths in Scotland since the beginning of this.

‘With an upward trajectory in cases, care homes are the new front line of this vicious virus. More attention and support certainly needs to be given to the residents and staff.’

Yesterday, the Scottish Government confirmed the Care Inspectorate has had reports of confirmed or suspected Covid-19 cases from 406 care homes –which is 37 per cent of the total number of care homes.

Mr Kilgour said the next phase of the response to the pandemic should be to carry out more testing of care home residents and called for more funding to help the sector ensure it continues to have personal protective equipment (PPE) for staff.

While some councils in England have passed on UK Government funding to care operators to fund PPE investment, Mr Kilgour said there has been a lack of similar action in Scotland. He said: ‘Local authorities I speak to say they would like to help but they are not getting extra money from the Scottish Government.

Across the sector, staff absence rates range from around 15 per cent to around 30 per cent.

The Care Inspectorate has asked all care homes to notify it when they have a suspected case or when a resident dies from the virus, and to keep them updated on staff shortages.

However, the taxpayer-funded watchdog initially refused to publish figures on suspected cases – and suggested anyone looking for the data would need to submit a freedom of information request, a process which can take up to two months.

She said: ‘It is really important that we are confident about the robustness and the accuracy of that information.

‘So we are currently working with the Care Inspectorate to check and double check the information they are working with before we have the confidence to release that.’

On funding for care homes, Miss Freeman said: ‘There may well be more we need to do. Along with PPE, looking at what support is needed in care homes and in the care at home sector is something that is a constant part of our work.’

A spokesman for the Care Inspectorate said: ‘The Care Inspectorate is working closely with care providers, health and social care partnerships, care industry leaders and the Scottish Government to ensure services get the support they need during the pandemic.’

Meanwhile, Miss Freeman announced yesterday that social care staff will get an immediate 3.3 per cent pay rise – backdated to April 1 – with workers providing direct adult support to be paid at least £9.30 an hour.

Miss Freeman said in a statement: ‘The measures we are announcing in partnership with Cosla today will ensure all people providing adult social care receive the real living wage for every hour worked with immediate effect, rather than having to wait until later in the year.’

At least four homes within Brighton and Hove have been struck by Covid-19, which is increasingly fatal to the elderly or people with underlying health conditions.

‘We have just collected from a home in the Sussex area,’ said one funeral director, who wished to remain anonymous.

‘The doctor has put down the cause of death as dementia and yet when we collected over the weekend, the staff told us she had developed a cough three days ago.

‘A few days after that, the client received a call from the home confirming they had an outbreak of coronavirus.

‘Further to that, we also found out from the surgery that there were seven deaths within the same home within the last number of days.

‘The point is, I strongly believe this is happening now – I would suggest there are a lot more than what’s being said.’

Another funeral director agreed, saying they could ‘absolutely say there are’ deaths happening within the city’s homes, but that they could not elaborate further.