Twelve terminally ill residents of New Jersey put an end to their lives with the help of a physician last year after the Garden State passed a law permitting assisted suicide.

The New Jersey Department of Health released a report on Friday which said that six men and six women between the ages of 50 and 93 took their own lives between August 1 and December 31 of last year.

Nine of those who chose to die through medical aid were diagnosed with cancer and three were stricken with a neurodegenerative disease like Alzheimer’s or Parkinson’s.

One of those who died also had a pulmonary disease and another suffered from gastrointestinal disorders.

According to the report, ten died in their own home and one died at a nursing home. Another died in another home.

Zeporah ‘Zebbie’ Geller, 80, died by physician assisted-suicide at the home of her children in West Orange, New Jersey last fall. Geller was terminally ill with cancer

Of the twelve patients, eleven were white and one was Asian. Six of them were married, three were widowed, two were divorced, and one was single, according to NJ Advance Media.

There is no data yet regarding how many patients took their own lives in 2020.

One of those patients who died was Zeporah ‘Zebbie’ Geller.

Geller, 80, was terminally ill with cancer. After Governor Phil Murphy signed the Medical Aid in Dying for the Terminally Ill Act into law in April, her family said they reached out to 40 different physicians.

None of them agreed to take her case on. In August, the law was reinstated after legal challenges.

Finally, the family was able to find a physician who helped Geller end her life. She died on September 30 in the West Orange home of her son, Paul, and his wife, Joanne.

Being able to take advantage of the law ‘made the final portion of her life much more tenable and dignified, and for that we are happy,’ Paul Geller told NJ Advance Media.

‘We were able to fulfill her wishes. We miss her tremendously.’

The disease adversely affects her lungs, requiring her to use an oxygen tank to breathe.

‘Since the law took effect, I have felt free to enjoy the rest of my life without worrying about needlessly suffering in agony when it ends,’ she said.

‘For the last year up until the COVID-19 pandemic hit, I have been traveling with my family and enjoying outdoor activities like camping.

‘Before the law passed, I didn’t have the peace of mind to do that.’ 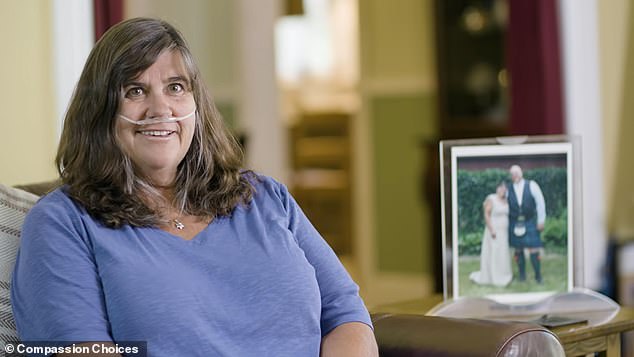 Susan Boyce, a 56-year-old resident of Rumson, suffers from a terminal genetic disease known as Alpha-1 Antitryspin Deficiency. The disease adversely affects her lungs, requiring her to use an oxygen tank to breathe. She has come out in support of the new law

Murphy had signed the bill in April 2019, making New Jersey the seventh state with such a measure. Maine enacted a similar law in June 2019, becoming the eighth.

Assisted suicide is also legal in the District of Columbia.

The Medical Aid in Dying for the Terminally Ill Act in New Jersey allows only patients who are terminally ill and have a prognosis of six months or less to live to acquire medication to end their lives.

Lawmakers tried for years going back to at least 2012 to advance the legislation.

The legislation has several measures that legislators called ‘safeguards,’ including requiring patients to make two requests and allowing them a chance to rescind the request.

The law requires two doctors to sign off on the request and that the terminally ill patient be deemed an adult resident of New Jersey who can make such a decision and who voluntarily expresses a wish to die.

It requires patients to request the medication twice and says they must be given a chance to rescind the decision.

At least one of the requests must be in writing and signed by two witnesses.

At least one witness cannot be a relative, entitled to any portion of the person’s estate, the owner of the health care facility where the patient is getting treatment or a worker there, or be the patient’s doctor.

Under the law, patients must administer the drug to themselves, and his or her attending physician would be required to offer other treatment options, including palliative care. 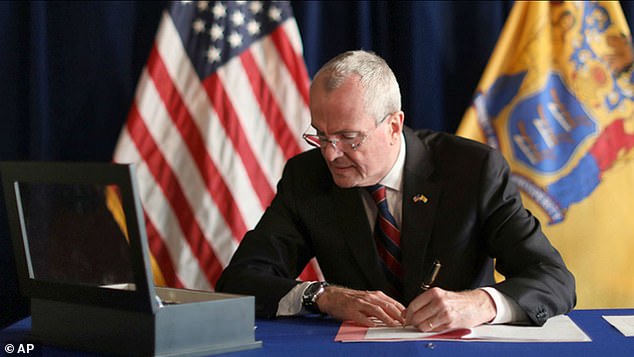 In this photo provided by the New Jersey Office of the Governor, N.J. Gov. Phil Murphy signs the Medical Aid in Dying for the Terminally Ill Act on April 12, 2019

Lawmakers tried since as early as 2012 to advance the legislation, but lawmakers and former Republican Gov. Chris Christie had expressed concerns over the measure.

Ultimately, the measure passed with the minimum number of yes votes in both the Democrat-led Assembly and Senate.

Even Murphy expressed some reluctance about enacting the law, saying in a message that while his Catholic faith might lead him not end his own life if he were terminally ill, he wouldn’t deny the choice to others.

STATES WHICH ALLOW ASSISTED SUICIDE FOR THE TERMINALLY ILL

The effort got attention in New Jersey in 2014 when a California woman got news coverage when she and her husband moved to Portland, Oregon, so she could use that state’s law to end her life on her own terms.

Her husband, Dan Diaz, has been in Trenton pushing for New Jersey’s law and praised lawmakers when it passed, saying residents wouldn’t have to leave their homes ‘to secure the option of a gentle dying process.’

Oregon in 1997 was the first state to provide an end-of-life option. In addition to Maine and Oregon, California, Colorado, Hawaii, Vermont, Washington and the District of Columbia all have similar legislation.

Montana does not have a law permitting medically assisted suicide for the terminally ill.

However, a 2009 Montana Supreme Court ruling determined that nothing in state law prevented a physician from prescribing such a drug to terminally ill person.