A group of 20 Harvard and MIT scientists and volunteers have been quietly mixing and trialing coronavirus vaccines in a private lab, but are yet to find out whether or not any are effective.

The group’s efforts have nothing to do with the FDA or the government. They have been working in a lab in Boston to try to come up with a safe, effective vaccine like hundreds of others around the world.

They have not yet published results or explained whether any of the volunteers ever tested positive for COVID-19.

The group claims that because people are mixing the ingredients at home after receiving them in drop-off packages, and because no money is changing hands, it is legal.

Calling themselves Rapid Deployment Vaccine Collaborative or Radvac, the group formed in March. It is being led by Preston Estep, a scientist who has a PhD in genetics from Harvard, who said he was alarmed by the government’s timeline of producing a vaccine in 12-18 months. He wondered whether they could privately come up with their own using readily-available ingredients.

Preston Estep (L) and George Church (R) in 2018. They are among the scientists who have taken the vaccine that Estep who decided to come up with his own vaccine when the government announced its 18-month timeline in March

Among the group is George Church, a celebrity geneticist who has not left his home for five months and who says the world is underestimating the disease.

Most of those involved did not want to be named but in an interview with Technology Review, Church said he thought the vaccine could work.

It’s unclear yet whether or not it is effective.

‘I think we are at much bigger risk from COVID considering how many ways you can get it, and how highly variable the consequences are.

‘I think that people are highly underestimating this disease,’ he said.

Church says the world is underestimating the disease. He has not left his house for five months, he says

For Church to take it, the ingredients were dropped off in his mailbox. He mixed it himself then took the doses two weeks apart.

The vaccine was produced using information about vaccines to protect against SARS and MERS.

It includes fragments of a pathogen – a protein to match the virus without creating the disease that it brings on – and a substance taken from shrimp shells.

‘It’s not the world’s most comfortable feeling,’ Alex Hoekstra said.

There are concerns that the vaccine may not work, and that it may even enhance patients’ symptoms.

The group released a white paper about the vaccine which sparked concern among some experts.

George Siber, the former head of vaccines at Wyeth, is among those to express concern.

‘It’s not the best idea—especially in this case, you could make things worse. You really need to know what you are doing here,’ Siber said.

There are concerns that the FDA may think they are running an unsanctioned clinical trial. 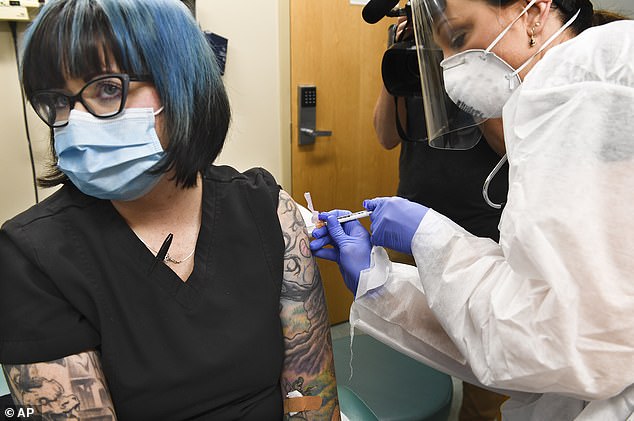 Moderna is leading the US race for a vaccine. Above, a nurse injects a volunteer in Binghamton, NY, on  July 27 as part of the trial

‘The less I know, the better,’ one bio-tech executive, who did not want to be named, said.

The group, and particularly Estep, is standing by its legality. They say that because they are giving it to a circle of friends and volunteers who are mixing the vaccine at home themselves and

‘If you are just making it and taking it yourself, the FDA can’t stop you,’ he said.

Other scientists around the world have been reportedly taking their own vaccines, including one in Germany who got a ping-pong ball-sized bump in his stomach after injecting his.

The front-runner in the US race to develop a vaccine appears to be Moderna, which says its trials are ‘going well’. The company is looking for more volunteers.

None are likely to be ready for the public until the end of this year or next year.