One Twilight superfan has revealed how Edward was able to impregnate Bella despite being a vampire ‘made of stone’ years after the books were released.

It has been 10 years since Breaking Dawn by Stephenie Meyer, the third installment of Twilight, was published for the public, but fans are still talking about one potential plot hole from the book and movie.

During the third installment, vampire Edward Cullen (played by Robert Pattinson) is able to impregnate Bella Swan (played by Kristen Stewart) despite having no blood running through his veins and being ‘made of stone’.

Interesting: Fans are still wondering how Edward Cullen (played by Robert Pattinson) from Twilight was able to impregnate Bella Swan (played by Kristen Stewart) in Twilight

Confused: This question comes after the third installment of the series was released 10 years ago and caused the confusion

Fair: The issue from the plot comes as vampires are supposedly dead and have no blood in their bodies to perform specific functions

Curious: One Twilight superfan took it upon themselves to answer the question 10 years after the plot first came out

Fans have said that Edward’s lack of blood flow should make him unable to impregnate Bella despite it happening during the last installment of the series.

‘If vampires have no blood how did edward get the hard on needed to impregnate Bella… many questions,’ one fan recently questioned.

While another wrote: ‘OK, so if vampires get sterilized once they turn, how TF did Edward impregnate Bella?’

In the world of Twilight, vampire women are unable to get pregnant because their body can not change to hold a fetus. But men are apparently able to get human women pregnant.

One Twilight superfan, Jenna Guillaume, who writes for Buzzfeed, decided break down how the pregnancy happened in the first place.

‘You see, Stephenie Meyer got the question, “How did Edward get a boner and impregnate Bella?” so much when Breaking Dawn was released, she included the answer to it on her website,’ Jenna revealed.

Stephenie first explained how vampire biology worked so people could understand the inner-working of their make-believe bodies. 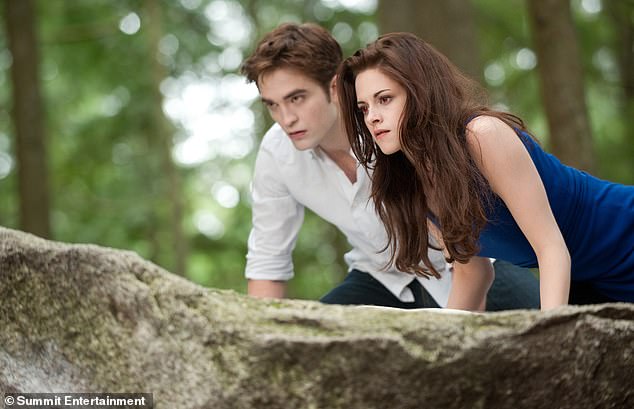 Interesting: The superfan revealed that the vampires have venom running through their bodies that act as venom. This allows vampire men to perform similar actions to that of humans

Intrigued: This explanation comes from what Stephenie Meyer has provided on her own website because she was flooded with the same questions

‘Vampires are physically similar enough to their human origins to pass as humans under some circumstances (like cloudy days)…’ Stephenie wrote.

‘The skin serves the same general purpose of protecting the body. However, the cells that make up their skin are not pliant like our cells, they are hard and reflective like crystal.’

The explanation then goes on to inform readers that between the cells is a liquid moving throughout the body similar to how blood moves through humans. But this liquid comes in the form of venom.

The venom, Stephenie writes, is what helps Edward impregnate Bella in the fictional book.

‘The normal reactions of arousal are still present in vampires, made possible by venom-related fluids that cause tissues to react similarly as they do to an influx of blood,’ Stephenie explained.

If that explanation isn’t enough to critics, Stephenie then goes on to explain how fluids are transferred between the two characters.

‘Like with vampire skin—which looks similar to human skin and has the same basic function—fluids still exist in male vampires, which carry genetic information and are capable of bonding with a human ovum.’