Twin boys, 3, had only 10 per cent chance of surviving before undergoing surgery in the womb

A mother who was told her identical twin sons only had a 10 per cent chance of survival reveals how she saved their lives by opting to undergo surgery while pregnant.

Jayde White, 29, from Essex, and husband Marcus, 38, were told at sons Rocco and Jenson’s 16-week scan that they had twin-twin transfusion syndrome (TTTS), which prevents blood from flowing evenly between the two infants.

In order to give their babies the best chance of survival, the couple made the decision that Jayde would undergo a procedure to seal shut abnormal blood vessels and regulate blood flow.

While the boys were still born premature, proud mother Jayde told how they are now thriving three-year-olds with a devoted 120,000-strong Instagram following, and modelling contracts with Next and PC World already under their belts.

Jayde White, 29, from Essex, and husband Marcus, 38, were told at sons Rocco and Jenson’s 16-week scan that they had twin-twin transfusion syndrome (TTTS), which prevents blood from flowing evenly between the two infants. Pictured, the brothers shortly after their birth 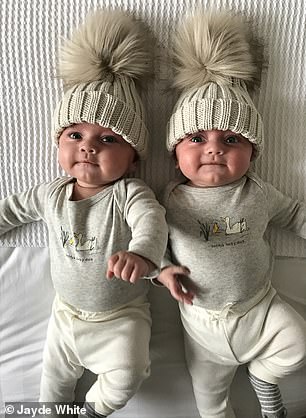 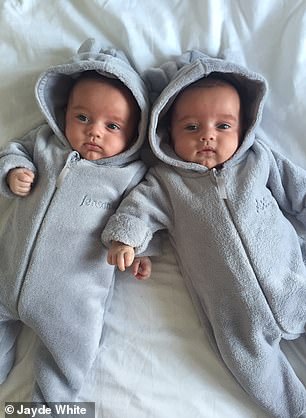 In order to give their babies the best chance of survival, the couple made the decision that Jayde would undergo a procedure to seal shut abnormal blood vessels and regulate blood flow in the womb. The boys (pictured as infants) survived the procedure and arrived at 33 weeks 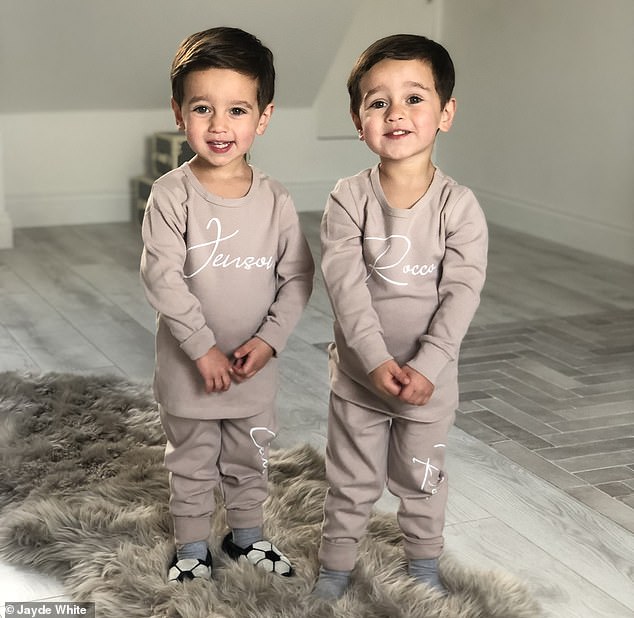 While the boys were still born premature, proud mother Jayde told how they are now thriving three-year-olds with a devoted 120,000-strong Instagram following, and modelling contracts with Next and PC World already under their belts. Pictured, the boys today in matching looks 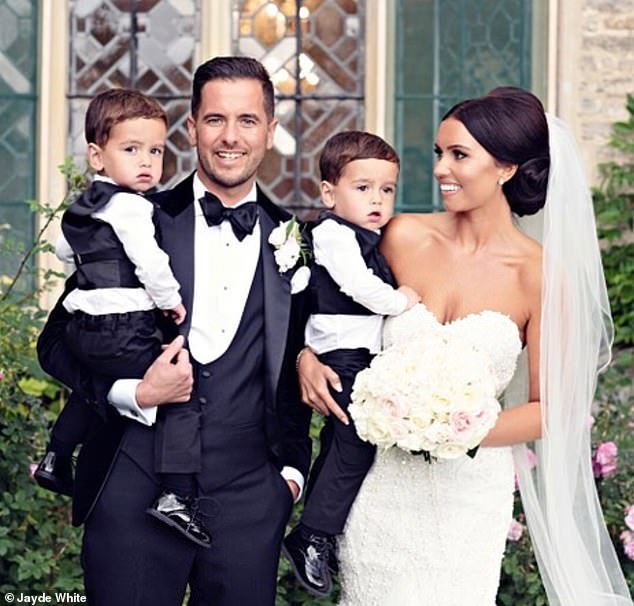 ‘When they were born I would post cute pictures of them dressed identical and gained so many likes and followers,’ said Jayde.

‘Now we work with big brands and get invited to cool events such as celebrity clothing launches and cinema screenings before they are even out. The boys are so lucky thanks to Instagram.’

‘It was awful,’ Jayde recalled. ‘I knew something was wrong at one of my first routine scans as the room went silent. 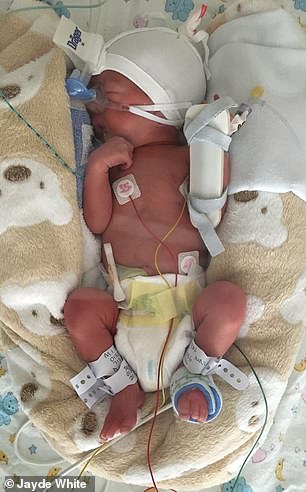 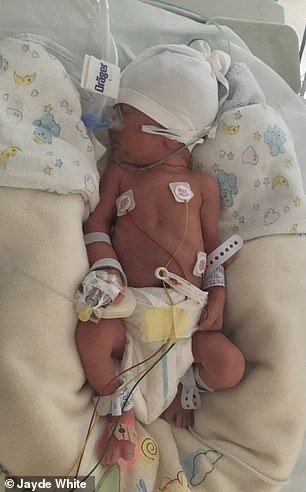 Following a successful procedure, Rocco and Jenson were born early at 33 weeks on May 20 2016 via C-section, weighing just 4lb 1oz and 3lb 12oz, respectively (pictured after their birth) 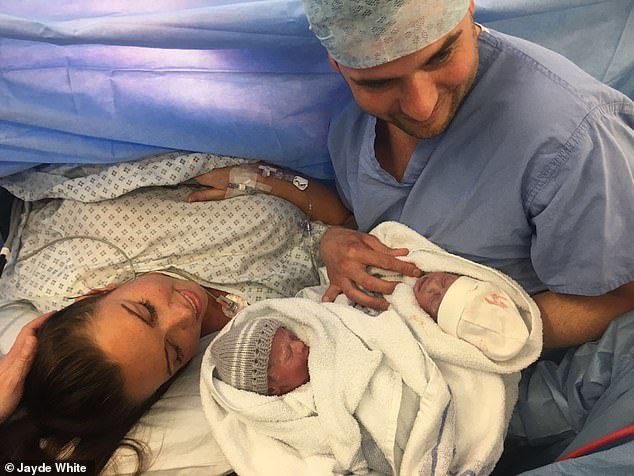 Jayde stares affectionately at her two boys after giving birth via C-section three years ago. The parents had to wait almost four weeks before being allowed to take their ‘perfect’ sons home 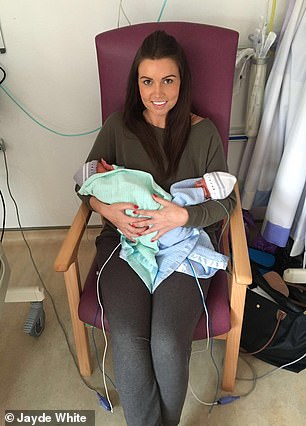 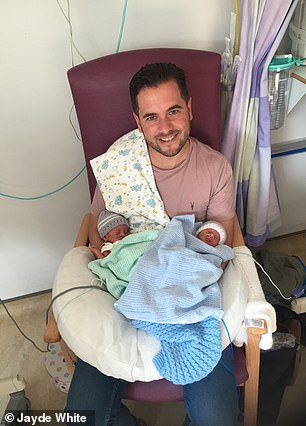 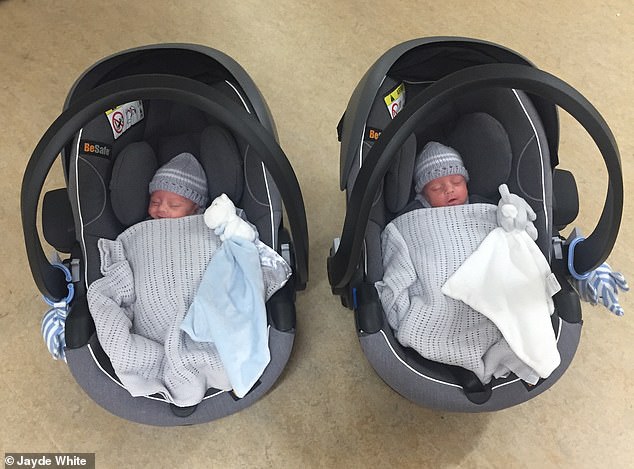 The babies were on Instagram shortly after their birth and Jayde quickly racked up the followers. Pictured, the tiny babies are snapped in sweet matching outfits

‘The consultant explained what TTTS was and referred me straight to University College Hospital in London, the next morning.

‘Having already read about TTTS when falling pregnant with identical twins we knew it wasn’t good news and were kind of expecting the worst.’

Ahead of surgery, Jayde and Marcus were asked to sign a document to ensure they understood the risks of the procedure and were happy to proceed with it.

‘I was terrified and had visions of us losing one or both,’ Jayde admitted. ‘I didn’t understand why it was happening to us.’

She continued: ‘I didn’t want just one baby, I wanted both my babies and I kept going over this in my head before the surgery took place. I felt lost and kept crying.

‘Marcus at the time seemed so positive to try and help me through it but has since said he was so scared too but tried to keep me strong.’

During the 45-minute long laser procedure, which seals shut abnormal blood vessels and permanently disconnects them, Jayde was able to see the twins on a screen.

She recalled: ‘It felt like a laser gun was firing inside my stomach. I could see the boys moving on the screen but I kept looking away as I was too scared that an arm or leg would fly in front of the laser.

‘I had to stay as still as possible. I was scanned immediately afterwards to check both boys were still alive. Then the following morning, and every week for the rest of my pregnancy. I never stopped worrying.

‘I worried my whole pregnancy. TTTS can return and I was worried every time I went for a scan that we would receive more bad news.

She added: ‘I wished the weeks of my pregnancy away and couldn’t wait for them to be born. 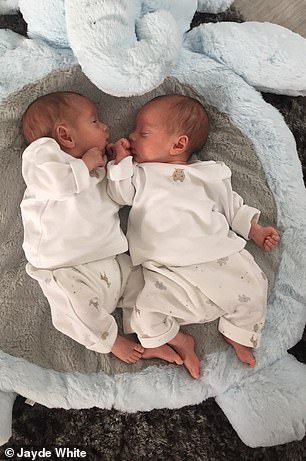 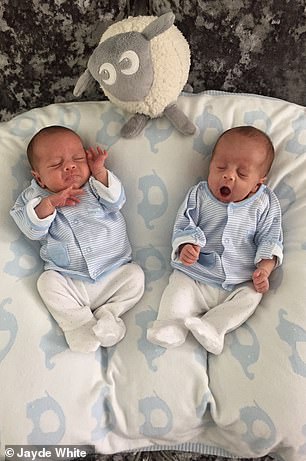 The photogenic brothers, pictured, had 60,000 followers at just a few months old. They were booked as Next models at just 12 weeks old and have gone from strength to strength 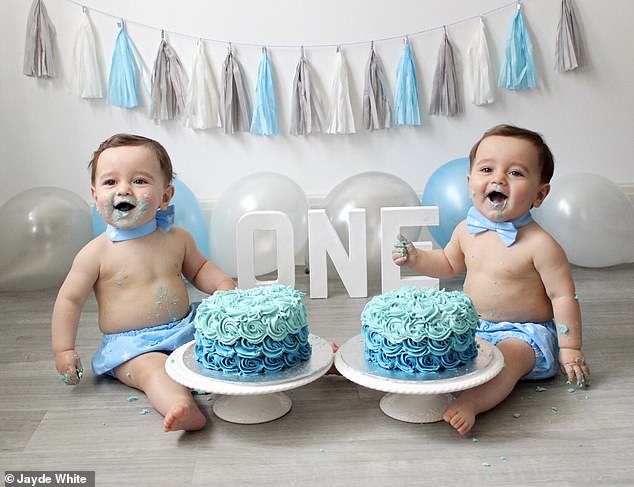 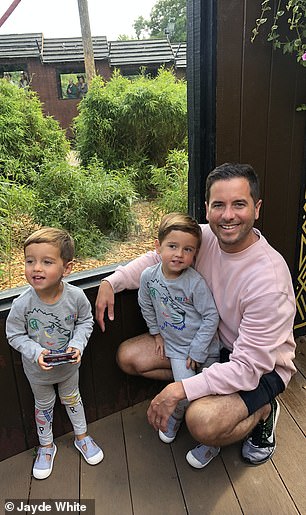 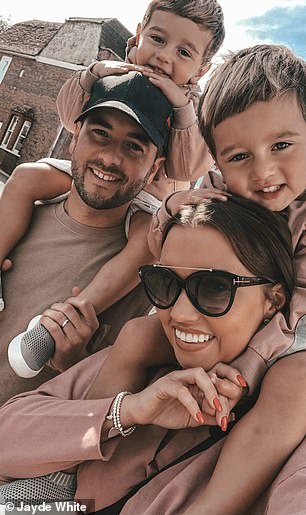 Three-year-old Rocco and Jenson seen recently with father, left, and with both parents, right

‘You are never really out of the danger zone in the pregnancy, it can also affect the babies brains too and have later complications. But we are so lucky the boys were unharmed and perfect.’

Rocco and Jenson arrived at 33 weeks in May 2016, weighing 4lb 1oz and 3lb 12oz, respectively. The twins spent almost four weeks in hospital before they were allowed home.

As the boys grew, Jayde started to post pictures of them onto her Instagram account, jayde_jenson_rocco, and within a matter of months she gained over 60,000 followers. They were hired as Next models at 12 weeks old. 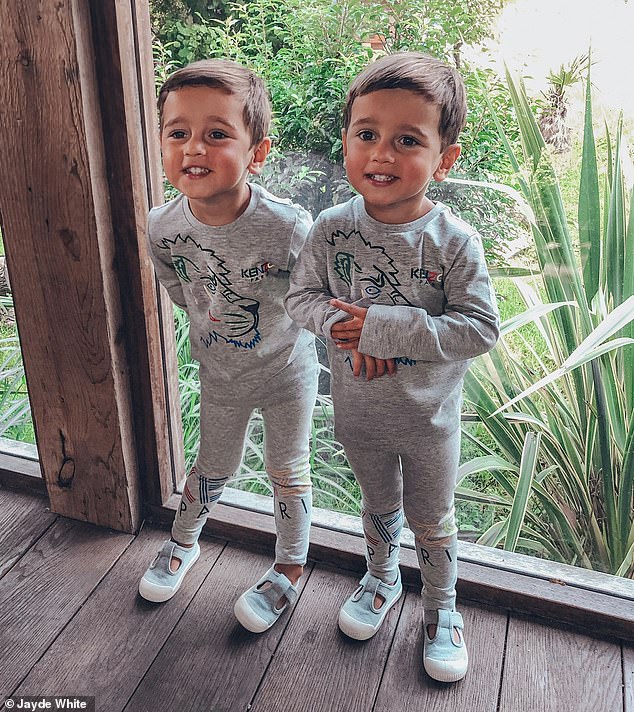 Three-year-old Rocco and Jenson (pictured) are now thriving, with the pair already boasting a model past – having been hired by Next at 12-weeks-old – and 120,000 Instagram followers 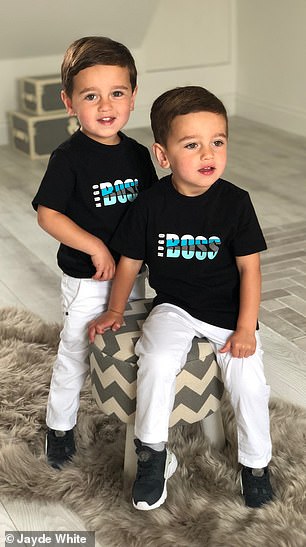 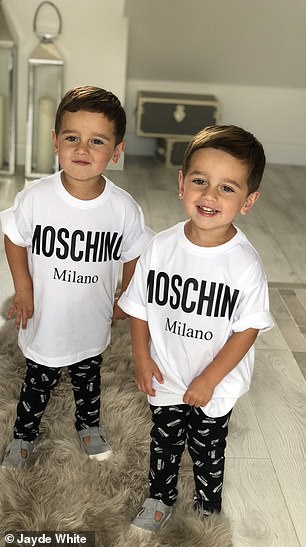 Thanks to the boys’ Instagram following, they now work with big brands and get invited to celebrity clothing launches as well as cinema screenings

She described her sons as ‘the most caring and gentle boys I’ve ever come across’.

Jayde said: ‘Marcus is very gentle natured and I feel like they are going to be just like him. They take it turns to be the more confident one or the more shy one, its hard to describe them individually as they change all the time and swap roles.

‘They of course are the best of friends. They’ve started to make friends with other children at pre-school but the teachers say they are never too far from each other.’

Jayde also praised the way Instagram had connected her to other parents of twins who had TTTS, saying ‘it’s really amazing for me to talk to other pregnant ladies in the position I was in.’ 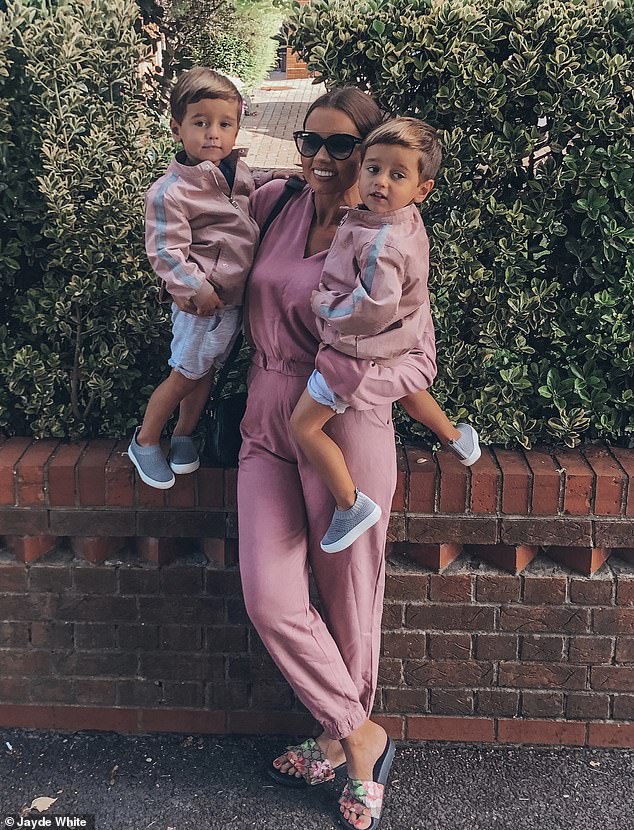 Complementing their mother’s outfit, the boys sport pink jackets and grey shoes, while Jayde dons a matching jumpsuit and floral sandals in a recent photograph