The world’s first set of twin pandas with a captive mother and a wild father received their names in a special ceremony yesterday in China.

Elder brother He He, or Harmony, and younger sister Mei Mei, or Beautiful, are named after two panda characters in popular Chinese cartoons.

The five-month-old baby pandas are the cubs of 16-year-old Cao Cao, which mated with wild male pandas after being released from captivity in February.

A breeder carries He He and Mei Mei during the naming ceremony today at the Shenshuping Panda Base, which is a part of the China Conservation and Research Center for Giant Panda 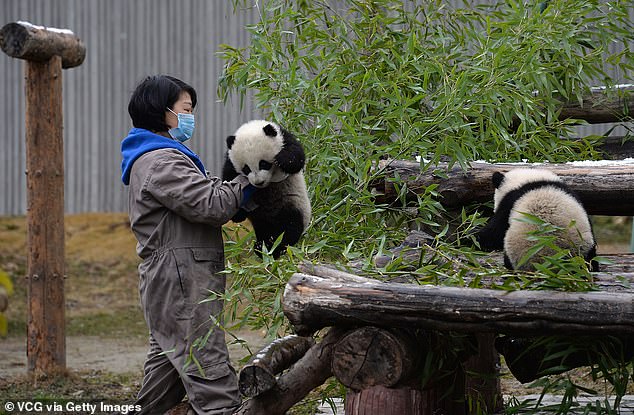 He He and Mei Mei were born at the Hetaoping Panda Base in Wolong, south-west China’s Sichuan Province, on July 25.

Their naming ceremony was held today at the Shenshuping Panda Base which is a part of the China Conservation and Research Center for Giant Panda, reported China News citing Huaxi Urban Newspaper. 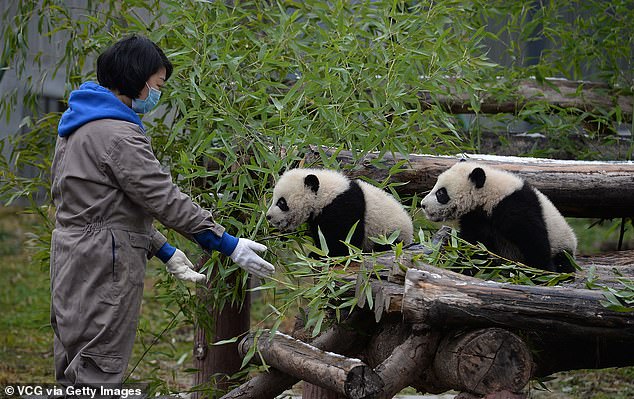 The elder brother and younger sister were born in July to 16-year-old mother Cao Cao, which mated with wild male pandas on two occasions after being released from captivity in February 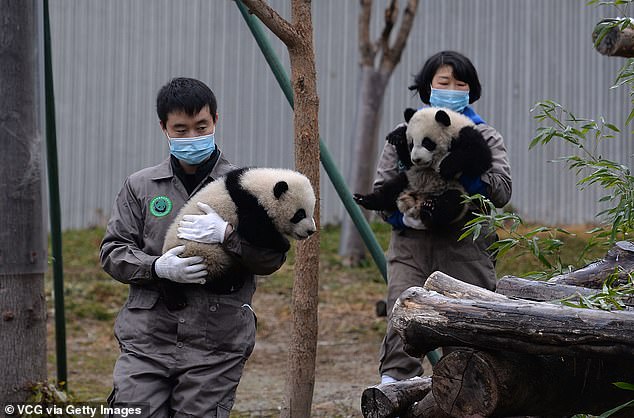 He He means ‘harmony’ in Chinese while Mei Mei means ‘beautiful’. The names were inspired by two panda characters from popular Chinese cartoons ‘Krtek a Panda’ and ‘Animal Chorus’

He He’s name means ‘harmony’ in Chinese, and it comes from a popular cartoon called ‘Krtek a Panda’. The cartoon tells the story of how a mole from Czech Republic travels to China to find its best friend, a stuffed toy panda called He He.

While Mei Mei’s name, meaning ‘beautiful’ in Chiness, is inspired by another cartoon, ‘Animal Chorus’. In the cartoon, an outgoing and clever female panda guitarist is called Mei Mei.

The birth of He He and Mei Mei marked the success of China’s back-to-wild panda breeding programme, which started in 2003 and aims to increase the genetic diversity of its captive bear population. 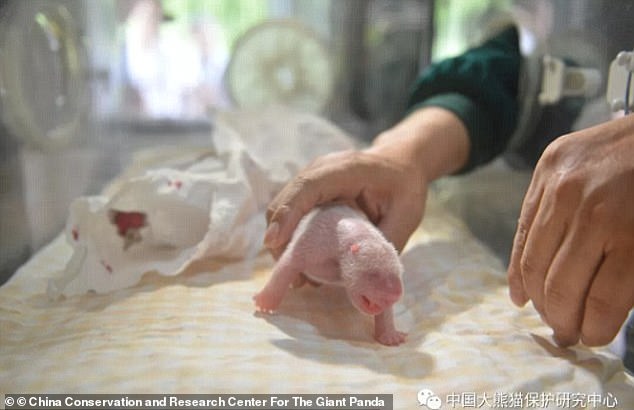 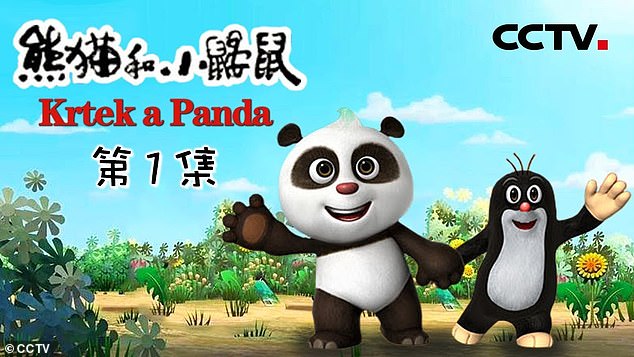 He He was named after a character, a stuffed toy panda, from cartoon ‘Krtek a Panda’ (above) 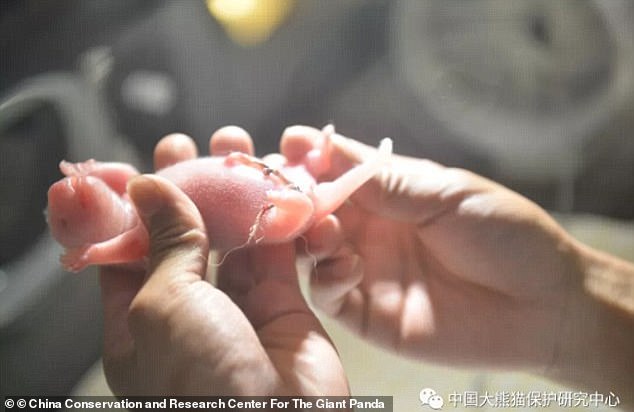 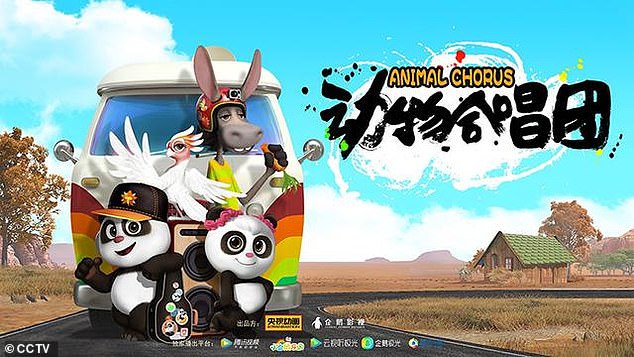 Female pandas are only in heat for up to 48 hours a year, which makes their pregnancy particularly difficult and rare. But Cao Cao has managed to conceive without human intervention two years in a row.

An experienced mother, Cao Cao was released from captivity on February 12 this year – ahead of panda’s mating season in spring. She was given a GPS in her collar to help keep a record of her activities.

Records showed that Cao Cao had two mating sessions which lasted 16 minutes and 18 seconds in total during her time in the wild, according to China Conservation and Research Center for The Giant Panda. 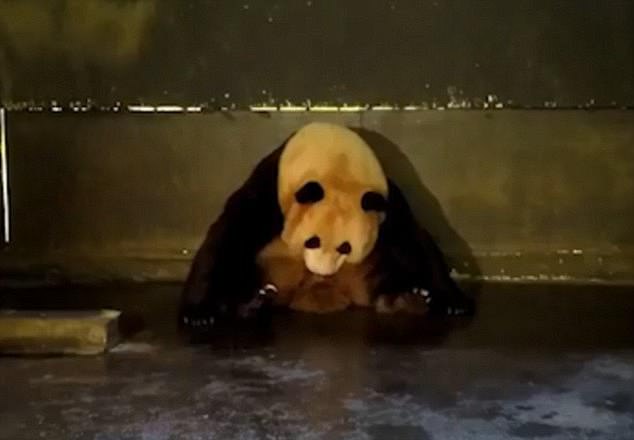 A video released by Xinhua shows Cao Cao giving birth to one of the cubs on July 25 at the Hetaoping Panda Base in Wolong. The female panda conceived while living in the wild 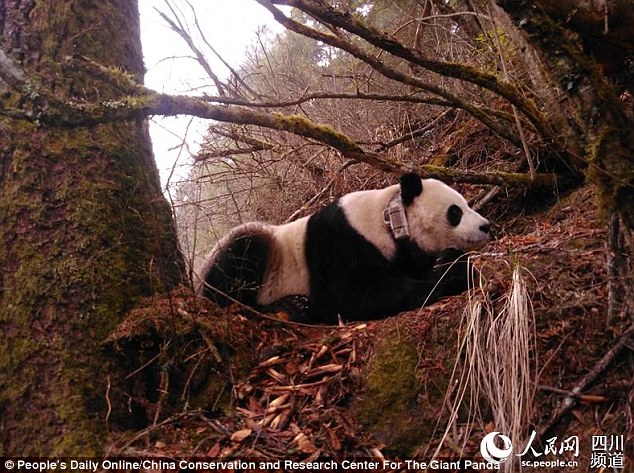 Last year, Cao Cao gave birth to a male cub after spending the mating season in the forest for the first time.

The cub was the world’s first baby panda to be born to both captive and wild parents.

Cao Cao’s three youngest cubs are considered a breakthrough achievement in the breeding and protection of the iconic Chinese animal species.

Zhang Hemin, director of China Conservation and Research Center for The Giant Panda, commented on the birth of Cao Cao’s cub last year: ‘We hope this will kick-start more efforts of releasing more pandas into the wild in the future.’

Going wild! Two captive-bred pandas are released back to nature at the same time 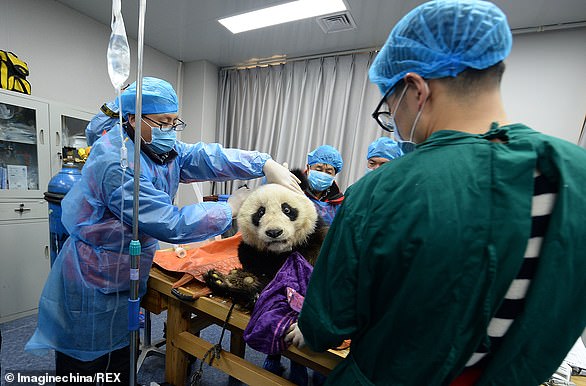 Two captive-bred female pandas were sent back to the forest today in south-west China’s Sichuan Province after receiving ‘systematic’ training to learn to live in the wild.

The pair, Qin Xin and Xiao He Tao, are both two years old and are looked after by the China Conservation and Research Center for Giant Panda.

Qin Xin, born on June 16 in 2016, is said to be naughty, active and lively; while Xiao He Tao, born on July 30 in 2016, is described as gentle, graceful and pretty, Chengdu Evening News reported on Tuesday.

Both of them had been given systematic wilderness training at the center’s Tiantai Mountain. They have mastered life in the wild, including foraging, finding water, roaming, and being alert to dangers, the report said.

They were released this morning to the Longxi-Hongkou National Nature Reserve, a habitat for wild pandas, near the city of Dujiangyan.

They were each given a GPS-equipped collar to track their whereabouts and activities.

Before Qin Xin and Xiao He Tao, the China Conservation and Research Center for Giant Panda had release nine giant pandas back to nature since 2003, according to China Central Television Station.