Twin Peaks actor Kenneth Welsh, who featured on the show as a villainous ex-FBI man obsessed with the occult, died Thursday at the age of 80.

His son Devon Welsh, a musical artist, announced on Twitter: ‘My dad passed away on Thursday peacefully at home. I will always love him beyond words.’

Kenneth played hundreds of roles onstage and onscreen over the course of a career that spanned more than half a century.

Dearly departed: Twin Peaks actor Kenneth Welsh, who featured on the show as a villainous ex-FBI man obsessed with the occult, died Thursday at the age of 80; seen in September in Toronto

‘He lived a wonderful life, he was the best father I could have asked for, and he touched so many lives. Please make a toast, watch a film/TV show he was in, celebrate a giant of acting,’ Devon wrote on Twitter this Saturday.

In Martin Scorsese’s movie The Aviator he even played the father of Katherine Hepburn, who was herself played by an Oscar-nominated Cate Blanchett.

But perhaps his most famous role was Windom Earle, a Twin Peaks character who is fixated on a nefarious strain of Tibetan mysticism. 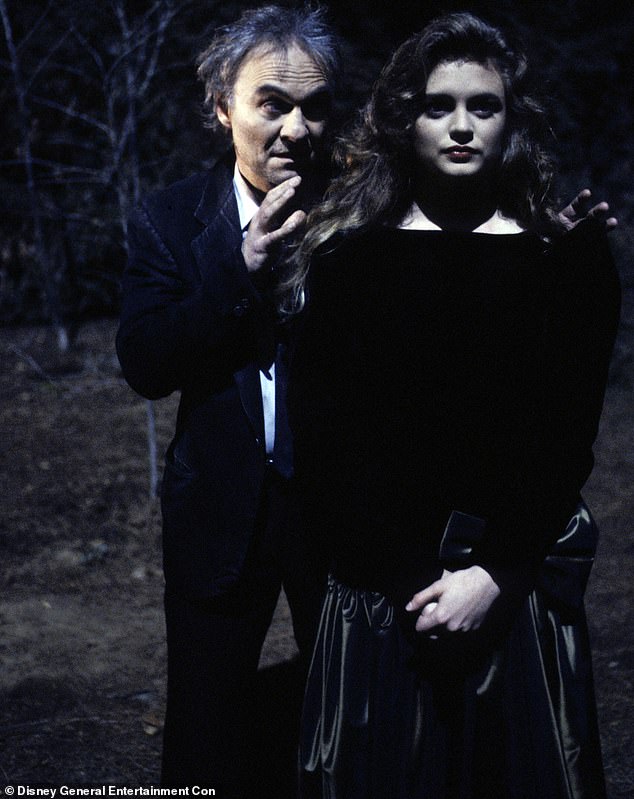 Flashback: Perhaps his most famous role was Windom Earle, the Twin Peaks character fixated on a nefarious strain of Tibetan mysticism; pictured on the series with Heather Graham

Born in Edmonton, Alberta in 1942, Kenneth realized early that he had an affinity for performing and getting attention.

‘Well I think when I was a kid I was always a bit of a show off in the class,’ he said in an interview with the founder of the Twin Peaks UK Festival.

‘I remember one of my school report cards said: “Kenneth has got to settle down and stop disturbing the class,” so they moved me up into the next grade to get rid of me.’

A girlfriend then persuaded him to take a drama class as it ‘was a real easy course and she could sell me the textbook half price,’ and a career was born. 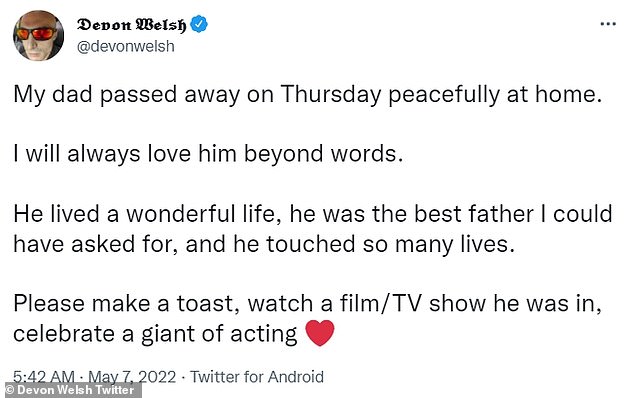 ‘I will always love him beyond words’: His son Devon Welsh, a musical artist, announced on Twitter: ‘My dad passed away on Thursday peacefully at home’

Kenneth graduated from the National Theatre School in Montreal and took to the stage performing Shakespeare for seven years as part of Ontario’s Stratford Festival.

In the 1960s he forged a television career and over the next few decades appeared on shows ranging from The Twilight Zone to Love, Lies And Murder.

Kenneth also made his mark in a string of TV movies, playing Thomas E. Dewey in the 1980s and then Thomas Edison in the 1990s.

He has remarked that when playing a historical figure he ‘would always go and find out as much as I could about the character, and there are volumes available on people like Harry Truman, and then you try and bring whatever you feel in relevant about that person to this particular story.’ 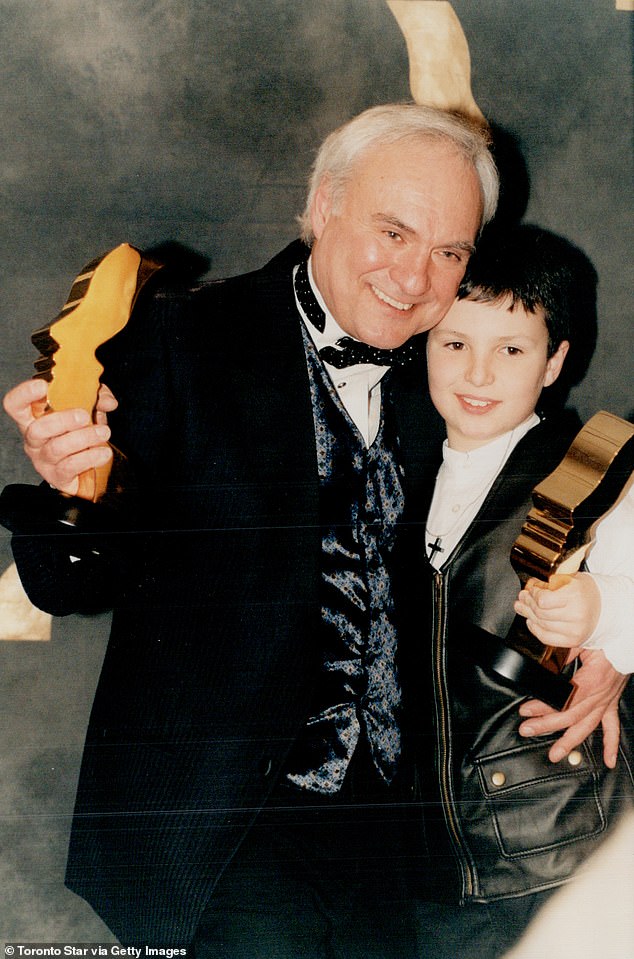 Throwback: Kenneth, who said once in an interview that his ex-wife was ‘still a dear friend,’ is pictured with his son Devon in 1998

However, Kenneth noted that ‘you have to be careful to not make a caricature of it. I’ve seen it both ways when actors go so far, but you have to think: “What is the motivation?” What is it that the character is thinking about? You have to deeper rather than just looking like the person.’

He spent years working prolifically in television, but his fame was greatly enhanced in the early 1990s by his scene-stealing role on Twin Peaks.

‘Windom seems to be this evil character, he can’t help it,’ Kenneth explained, ‘but there’s a playfulness in Windom that I liked to embody, an edge of humor with an ironic twist, and also, his ability to disguise himself so fully that he’s actually proud of himself, as I would be too.’

Kenneth noted that the character, a master of deception, ‘liked to fool you with different ways of presenting a character, the dialect or movement, or ways of speaking; it was like my own kind of crazy ways as an actor and the ways I explore that bought me to this character in the way that it did.’ 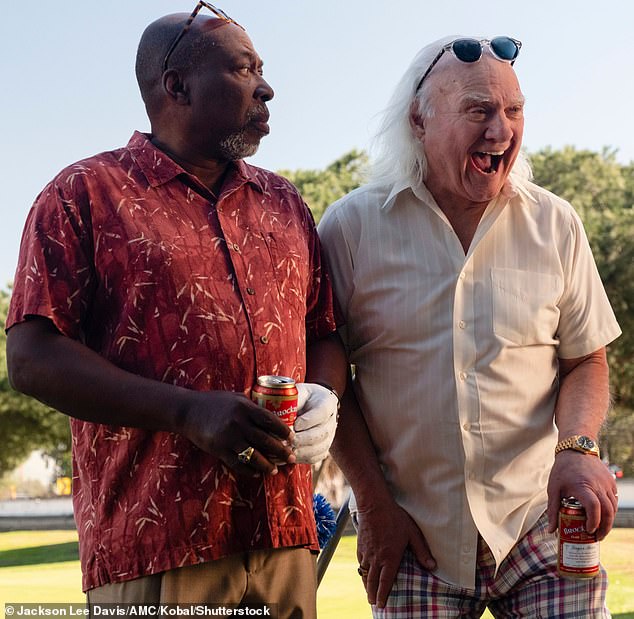 Seen onscreen: One of his later roles was a recurring part on the dramedy Lodge 49, on which he is pictured alongside Brent Jennings

During an interview with the website 25 Years Later he dished that David Lynch, the director of the series, was ‘such a crazy character that you would never know what he was going to come up with next.’

He gushed: ‘One of the main things I remember about David is that, of the many directors I’ve worked with, he was so supportive of his actors. I think he really does love actors. I was fortunate enough to be in that series and I never got to work with him on anything else. But for that brief time, he was just so kind.’

David apparently ‘would always say things like: “These actors are great.” He would just always compliment the actors all of the time.’

After Twin Peaks, Kenneth continued working steadily and consistently even through old age, from films like Survival Of The Dead to series like The Blacklist. 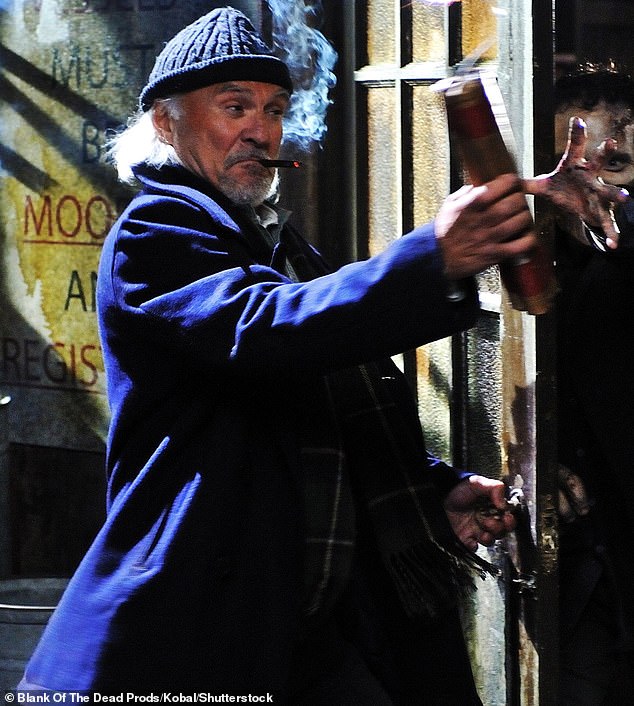 Later years: After Twin Peaks, Kenneth continued working steadily and consistently even through old age, from films like Survival Of The Dead (pictured) to series like The Blacklist

In the early aughts Kenneth played the American vice president in the environmental disaster movie The Day After Tomorrow, whose director Roland Emmerich controversially cast him because he looked like Dick Cheney.

One of his later roles was a recurring part on the dramedy Lodge 49, which was well-reviewed but flew under the radar and was canceled in 2019 after two years.

Kenneth worked consistently to the end, and he now has multiple movies in post-production that he will be featured in posthumously.

As far as his personal life goes, Kenneth has referred in the past to an ex-wife ‘who is still a dear friend’ and who in fact first brought Twin Peaks to his attention. 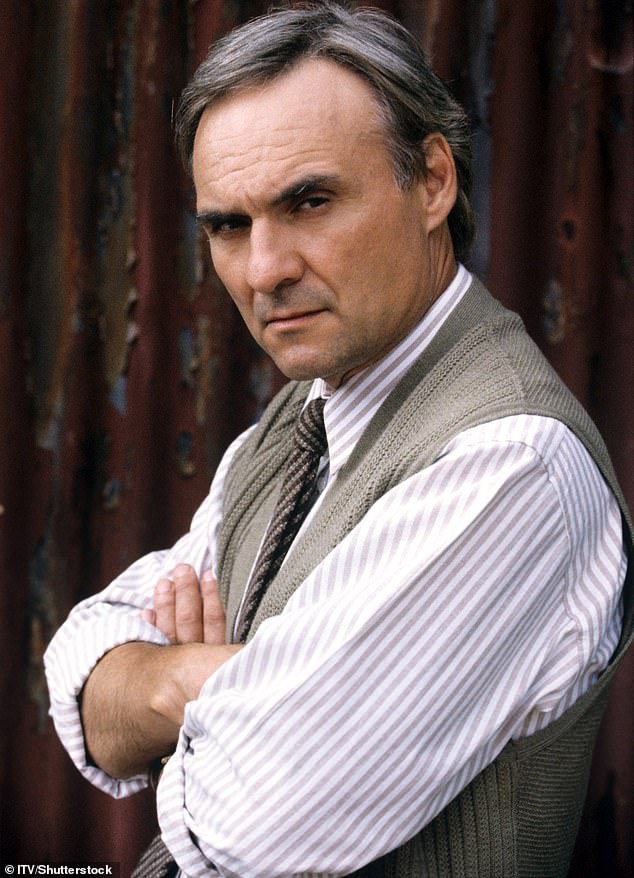 Through the years: Kenneth had a prolific career in TV movies, including the 1990 ITV production The Widowmaker (pictured) from Shakespeare In Love director John Madden