Carlos Correa admits it was ‘shocking’ that his deals with the Giants and the Mets fell through over injury concerns and claims his ankle has ‘never hurt’ as he is re-introduced as a Twin after penning ‘six-year, $200million deal’

Carlos Correa’s free agency saga is finally over after the two-time All-Star was reintroduced as a Minnesota Twin Wednesday after a ‘six-year, $200million deal’ was finalized, following a successful physical.

Correa agreed to deals with both the San Francisco Giants and New York Mets during the offseason, though both accords fell through due to concerns over a prior injury.

Eventually, Correa found his way back to the Twins, who he played for last season before entering free agency.

Throughout the rollercoaster period, Correa was surprised over the fallout with the Giants and Mets.

‘I had a lot of doctors tell me that I was fine, I had some doctors that said it wasn’t so fine,’ he said at his press conference.

‘It was shocking to me because since I had the surgery, I never missed a game, I never [got] treatment in my ankle, my ankle’s never hurt.’

Correa insisted his body has ‘never felt better’ and is ultimately contented with how everything has shaped out ahead of the upcoming MLB season.

‘I’m happy to be here in Minnesota. I’m happy to be a Twin,’ he said. ‘We started something special last year and there’s some more work to be done.’ 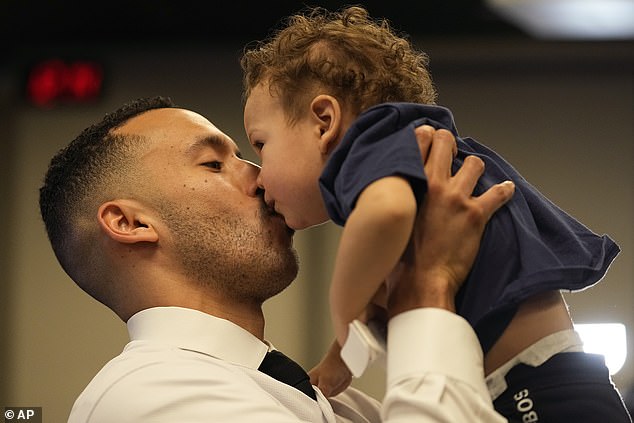 Correa kisses his son Kylo, one, following a press conference at Target Field in Minneapolis

Although Correa did not technically fail his team physicals with the New York Mets and San Francisco Giants, concerns over his surgically repaired leg led both clubs to back out of nine-figure agreements with the two-time All-Star. The Mets were reportedly interested in working out a compromise with Correa, who ultimately decided to return to Minnesota.

‘Wow what a journey it’s been,’ Correa wrote on Instagram. ‘A lot of emotions involved throughout the whole process but always believed that at the end of the day God will put me in the right place.’

The Mets released their own statement Wednesday, wishing Correa ‘the best’: ‘We were unable to reach an agreement.’ 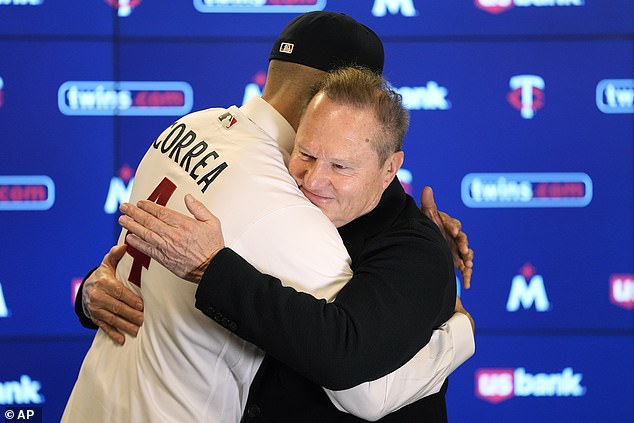 ESPN was the first to report Correa’s agreement in Minnesota, which could be worth as much as $270 million due to a vesting option tied to certain benchmarks.

Correa played for Minnesota last season, but declined a $35.1 million player option on his contract to test the free agency market this winter.

A questionable physical put the kibosh on his 13-year, $350 million deal with the Giants, who abruptly canceled a December 20 press conference with their new shortstop when doctors flagged the results in San Francisco. 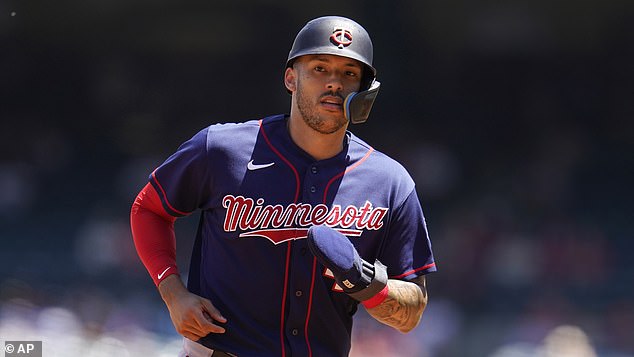