‘It’s f***ing awful in every possible way… one of the most chickens*** things I’ve ever seen in baseball’: Minnesota Twins manager Rocco Baldelli reacts FURIOUSLY to overturned call in loss to Jays – after storming onto the field to confront umpires

It seems diamonds are not a man’s best friend. Not in Minnesota on Sunday night, anyway.

Twins manager Rocco Baldelli spiraled into a fit of rage after replay officials overturned a call which would ultimately be the winning run, as Minnesota went down 3-2 to Toronto.

Postgame, Baldelli labeled the incident ‘one of the most chickens*** things I’ve ever seen on a baseball field.’ The Twins manager found himself ejected for vociferously arguing the decision.

‘It’s one of the worst moments I think we’ve seen of umpiring in any game I’ve ever been a part of in baseball,’ Baldelli said. ‘I think it was pathetic what just played out.’

The Twins manager revealed he wasn’t given an explanation on the reversal before labeling the incident as one of the ‘worst moments’ of umpiring he had ever seen.

‘That’s beyond embarrassing for our game, for all the players out there on both sides of the field.

‘It’s completely unacceptable. I can’t even believe I’m sitting here talking to you guys about this right now.’

Blue Jays outfielder Whit Merrifield ran from third toward home and was resultantly called out before the decision was overturned with Twins catcher Gary Sanchez deemed to have illegally interfered.

According to the adjudicators, Merrifield wasn’t given clear passage to return home. If the initial call had stood, Toronto’s inning would have been over, allowing Minnesota a chance to win the game with scores tied at two. 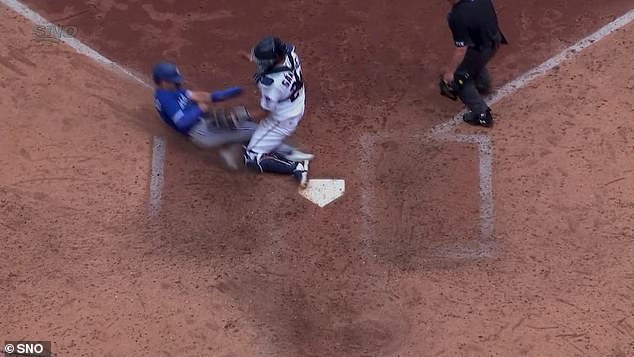 Was the right decision made?

Instead, the ruling put the Blue Jays up 3-2 at the top of the tenth, and the scoreboard remained unchanged despite the home team’s best efforts.

Game-winner Merrifield spoke to the media postgame, explaining how he saw the situation unfold in real time.

‘I had a feeling there was going to be a play at the plate,’ he said.

‘[I] saw Gary straddling home plate so tried to just slide into him, straight into him best I could.

‘I know what the rule is, it was just a matter of if they were going to call it.’

And indeed they did. Much to the fury of Baldelli and the hometown crowd who showered the umpires in boos immediately after the call and the result.

It is the third time Baldelli has been ejected this season, and the eighth time over the course of his career. 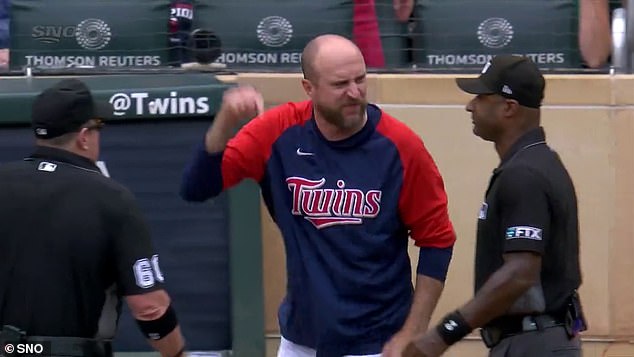