A murderer calmly posted Christmas cards through his neighbours’ doors as his blind victim lay dead in a cupboard at his home.

Families on the North Shields street were unaware as they sat down to lunch last year that Jillian Grant was dead just doors away in killer Mark Smith’s flat.

The 37-year-old’s body was found in Smith’s flat on December 25. She had been smashed in the head with a hammer and strangled.

However Smith’s crime was not uncovered until he set fire to his parents’ home on Christmas morning as they slept.

His parents Graham and Linda were saved by a smoke alarm but the blaze caused police to visit Smith’s flat, on Tennyson Terrace, where they found Jillian’s body stuffed in the hall cupboard.

Smith, who eventually admitted killing Jillian and attempting to murder his parents at court, killed himself in jail while awaiting sentence, so what motivated his brutal crime still remains a mystery.

However, it has now been revealed that despite having just killed a vulnerable woman and attempted to hide her body, Smith then wrote out Christmas cards to all his close neighbours, and hand delivered them through their doors. 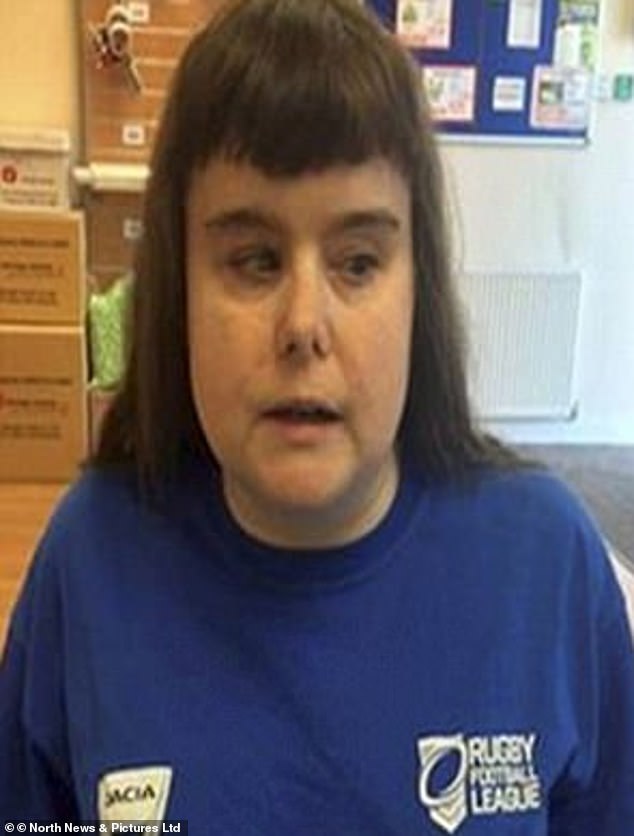 Jillian Grant, 37, was born blind and seen on CCTV heading towards Smith’s home on December 22.  It is thought he killed her sometime between December 22 and 24 last year

Sean Brunton and his partner Colleen Cruddas, who live two doors away and previously lived in the flat above, said they were horrified to discover they had received seasons greetings from a killer, possibly penned in the presence of his dead victim.

Mr Brunton, 43, said: ‘We got a Christmas card through the door, I think it was on the Saturday. After a few days we had figured out he must have pretty much killed her the day after posted the cards.

‘He’s just a psychopath, to go from killing someone like that to writing out Christmas cards. And we must have been having our Christmas dinner while there was a body there.’

Colleen, 51, added: ‘When we found out what had happened we just picked the card up and threw it in the bin. We just wanted it out the house.’

Suspicion fell on Smith as emergency services attended the fire at his parents’ home on East Cheap, in Heaton, Newcastle. 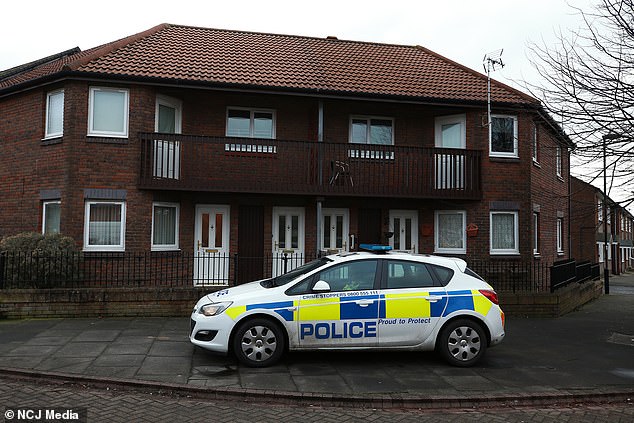 Police found Ms Grant’s body inside Smith’s flat on Tennyson Terrace in North Shields, pictured, hidden under a large number of items in a hall cupboard

He was found at the bungalow, holding the same kind of bottle used to set four seats on fire at the house.

And when police went to his home as part of their investigation, they found traces of blood in the bathroom, then discovered Jillian’s battered body hidden under a large number of items in a hall cupboard.

Tennyson Terrace quickly became a major crime scene on Christmas afternoon and was cordoned off as police, firefighters and a bomb squad arrived at Smith’s flat.

Smith’s neighbour Mr Brunton said: ‘We were having something to eat and before we knew it all the police were there. We were just having a lovely Christmas up until that point.’

Judith Oxborough, a retired nurse, lives across the road from Smith’s flat. She was enjoying Christmas Day with husband Bryan and daughter Zoe when the drama unfolded.

‘We had just had our Christmas Dinner then we became aware of a noise and lots of flashing lights, I was really worried of course.

‘We had had a nice day. We were playing games and things and watching the Queen’s speech.

‘It is so strange to know that she had been there for days while we were celebrating Christmas. It’s very upsetting. She was blind, it’s just awful. She wouldn’t have been able to get out. 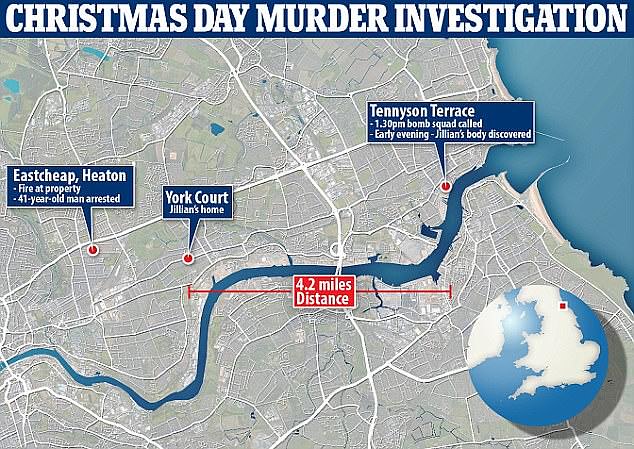 Neighbours said they were sitting down to lunch when police started to arrive in their road last December. This map shows the distance between the victim and murderer’s homes 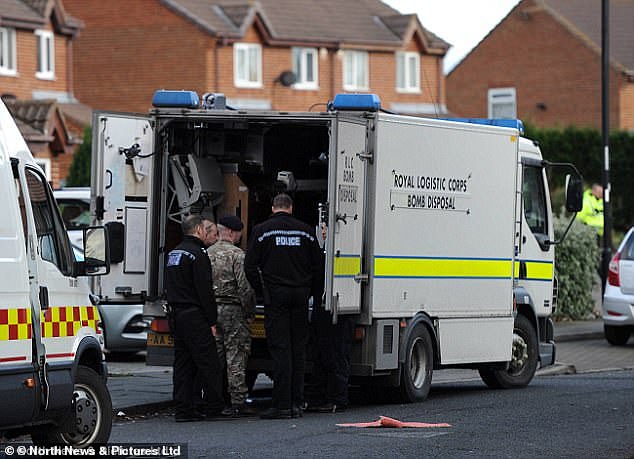 Sean and Colleen, who had known Smith for years, were stunned when it gradually emerged a body had been found, and he had been arrested on suspicion of murder.

Colleen said: ‘I never ever thought of him like that. I have known him for about 10 years.’

Sean said: ‘He was really quiet. He kept himself to himself. But there was always something about him you couldn’t you couldn’t put your finger on. But you would never think anything like that.

‘It was a really strange situation to hear you used to live upstairs from a murderer. ‘

Ms Grant was born blind and adopted at six months old by a couple from Newcastle.

Confident and outgoing, Ms Grant was determined not to let her disability stand in her way and she studied music as a teenager before going on to live independently in Wallsend. 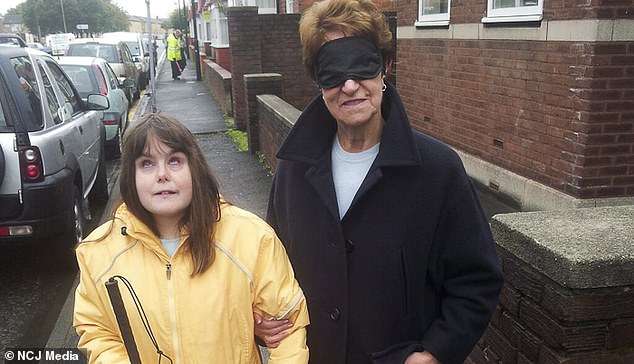 CCTV footage showed Smith visiting Ms Grant’s home at around midday on December 22 before leaving with her 20 minutes later and heading towards his home.

It is thought he killed her sometime between December 22 and 24.

Prosecutors claimed there was evidence that Smith had sexually assaulted Ms Grant, however the defence disputed this.

It was also suggested in court that he had attempted to kill his parents in a ‘twisted attempt’ to protect them from finding out what he had done.

Smith was found dead in his cell at HMP Durham in July.