Callum Bigley, 32, from Anfield, was found guilty of false imprisonment, actual bodily harm, and beating, and sending a ‘malicious communication’ after he held his girlfriend prisoner during a horrific three-day ordeal

A man forced his girlfriend to write her own suicide note during a horrific three-day ordeal where he held her prisoner and tortured her.

Callum Bigley attacked his partner in her own home, whipping her body as he re-enacted biblical scenes of Jesus before he was crucified.

The 32-year-old locked all the doors and windows to the house in Walton, while he mockingly wore the key to the property on a chain around his neck.

The ordeal began in the middle of the night, on February 13, when Bigley woke and was heard mumbling incoherently, prosecutor Edmund Haygarth said.

For no reason he attacked his partner, smashing her face with a Blackberry phone and assaulted her with knuckledusters.

The thug also used a lump hammer which he thumped on her toe as he urged her to confess to cheating on him.

On the final day of her ordeal, Bigley ‘compelled her’ to write a suicide note, telling her it would be placed on the mantelpiece and how he planned to hang her, with it arranged to look like she had taken her own life.

The victim was ‘genuinely afraid it [murder] might come to pass,’ Mr Haygarth said. Bigley kept his partner inside in a house on this Walton street for three days and made her write a suicide note during the ordeal. He also smashed her face with a Blackberry phone

Bigley accused his victim of being unfaithful saying she had flirted with the gas man and ‘checking out men on the telly’.

He also wrapped a TV HDMI cable around his partners neck so she couldn’t breathe.

He then began whipping her, taunting her: ‘You’re going to be like Jesus Christ on the crucifix.’

The mum-of-two was left with black eyes, a bleeding face and a collection of bumps and bruises after her shocking ordeal.

The 32-year-old kept promising that if she admitted to being unfaithful her safety could be guaranteed.

But when she ‘confessed’, he carried on with the violence, even attacking the mum in front of her toddler daughter. 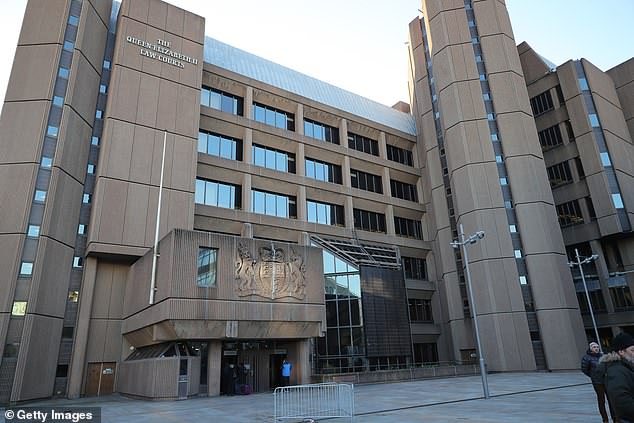 She managed to escape by throwing a hoover through the living room window and clambering outside in her pyjamas. Workmen then helped her to escape.

Bigley went on the run and was not found until six weeks later when he was arrested on March 28 as he made his way to a funeral near Anfield crematorium.

During his trial, Bigley refused to come to court and was not present when a judge sentenced him to nine years behind bars. A restraining order was also imposed.

The Anfield man was found guilty of false imprisonment, actual bodily harm, and beating, and one of sending a ‘malicious communication.’

Bigley has been before the court 12 times for 19 different offences.