In raptor! Twitchers flock to Lincolnshire to see rare bone-crunching bearded vulture named ‘Vigo’ with an 8ft wingspan after it flew 800 miles from the Alps

A huge bone-eating vulture dubbed ‘Vigo’ with an 8ft wingspan was filmed circling over a field yesterday in what was a rare sighting of the bird of prey in Britain.

Up to 200 enthusiasts raced to Moulton West Fen in Lincolnshire to see the bearded vulture, or lammergeier (‘lamb vulture’), which is normally found in Alpine regions.

Mark Hawkes, a birder from St Neots, Cambridgeshire, caught the vulture on camera at 9.15am and said it was from a small but growing population in France. 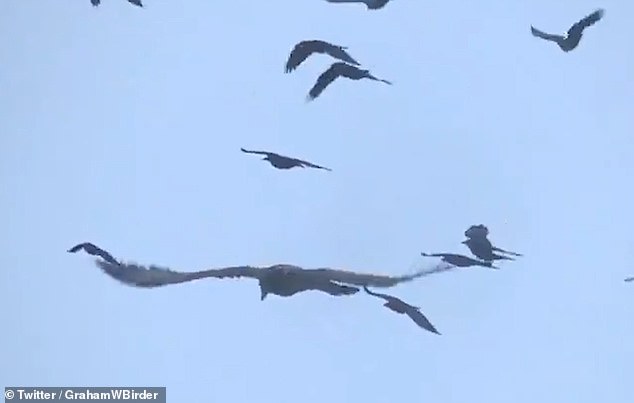 The bird, also known as a lammergeier (‘lamb vulture’), is normally found in Alpine regions 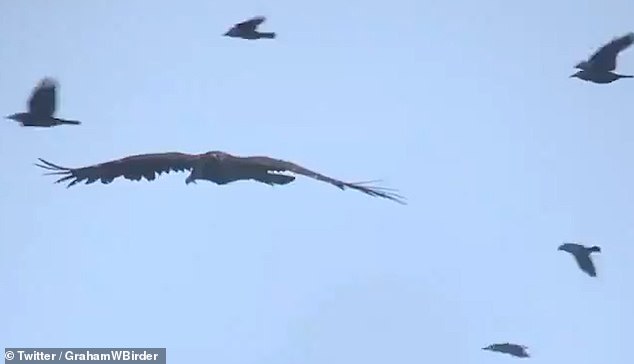 The bird was also recently spotted in the Norfolk area, which came after a spate of sightings over the summer in Sheffield, Derbyshire and the West Midlands.

Those were the first sightings of the bearded vulture flying in British skies since it was spotted and photographed in 2016 over Dartmoor in Devon.

Mr Hawkes tweeted yesterday: ‘Spot the odd one out! Lammergeier present until 9.15am then drifted off low north from Moulton West Fen, Lincolnshire.’

Asked about the bird by another Twitter user, he added: ‘It’s from a small but growing population in France, which is being boosted with reintroduced birds.’ 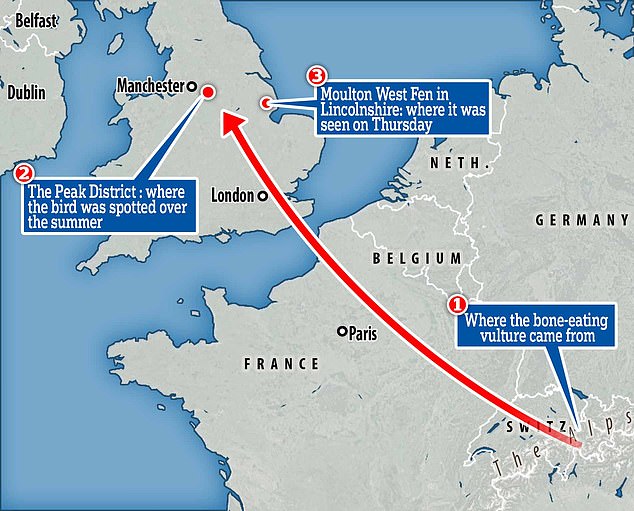 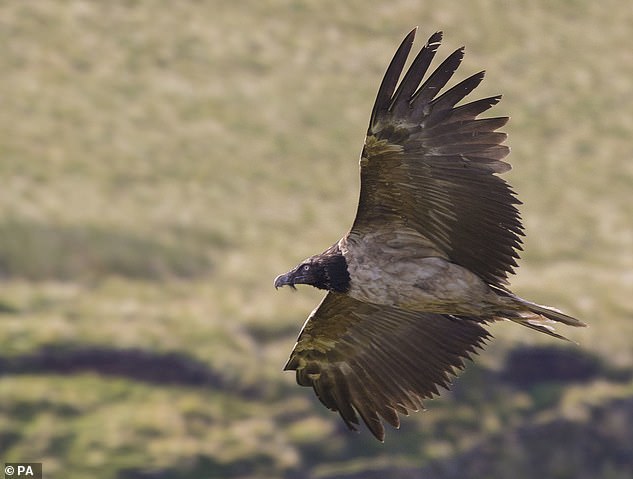 The bearded vulture was also spotted in the Peak District over the summer (above, in July) 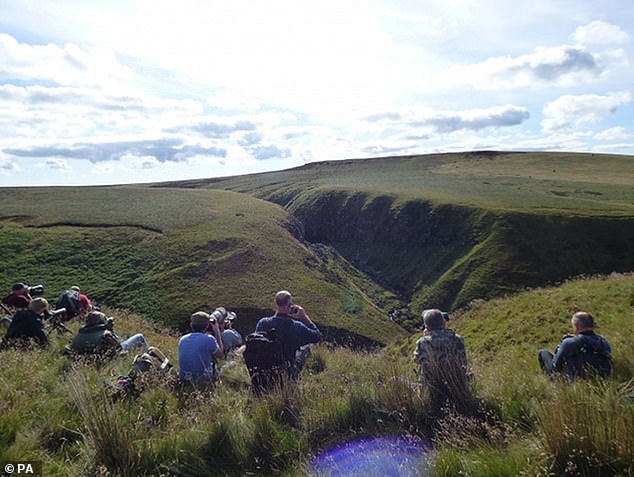 Experts believe the bearded vulture flew over from the Alps, having being part of a population that was released into the wild there.

How the bearded vulture feasts on the bones of lambs

Bearded vultures used to be found in all Southern European mountain areas, from Western Spain to the Balkans, but have dropped in population due to a decrease of availability of food – including chamois, roe deer and ibex.

They are also known by the name ‘lammergeier’ (‘lamb vulture’) but they do not hunt live prey and avoid meat.

It was once thought that they killed lambs and even small children, and used to be hunted down in the Alpine region with a bounty for each one killed. Therefore they are now the rarest vultures in Europe.

The total population in Europe, including Turkey and Russia, is estimated to be at 600 to 1,000 pairs.

Their diet consists mostly of carcass bones, and they can swallow and digest the size of a sheep’s vertebrae.

Bones that are too big for them are dropped onto rocks from a height of up to 330ft to shatter them.

They also believe the bird had encountered bad weather above other countries so fled to the UK skies, or perhaps went on a trip away from its home in the Alpine region.

It is thought to have flown over the English Channel at the end of June from central Europe, where there are only 600 to 1,000 pairs in an area stretching from Spain to Russia.

The vultures can also be found in the Caucasus between the Black and Caspian seas, Africa, the Indian subcontinent and Tibet.

The birds, which normally live and breeds on crags in high mountains, feed mainly on bones from the carcasses of large herbivores like sheep.

Their distinguishing feature is their feathered neck, while this type of bird tends to hatch two or three eggs in winter before they hatch in spring.

The bearded vulture is categorised as ‘near threatened’, according to the International Union for Conservation of Nature Red List of Threatened Species.

When the bird was spotted in the Peak District over the summer, Tim Birch, from Derbyshire Wildlife Trust, warned there would be an ‘international outcry’ if the bird was harmed but the massive interest was the best way to keep it safe.

He said: ‘People have been coming to see it from all over the country and it is very exciting to see such a huge and rare bird.

‘Unfortunately, in an area which should have the best protection, we see some of the worst ongoing bird of prey persecution.

‘The sight of this spectacular bird gives a glimpse of the potential future the park could have in hosting a range of species, including top predators, creating a healthy, balanced ecosystem where wildlife could flourish for the benefit of all.’