Twitter is continuing its frenzy of new features by testing out a filter for direct messages that aims to curb abusive and unwanted messages.

According to a tweet from the company, the new filter will sort messages that ‘may contain offensive content’ into a separate inbox called ‘additional messages.’

The separate bin will be in the ‘message requests’ folders where DMs from un-followed people are sent and must be opened manually by a user to read the message.

Instead of reading the flagged material users can also choose to delete the message preemptively.

‘Unwanted messages aren’t fun,’ a tweet from the company reads.  ‘So we’re testing a filter in your DM requests to keep those out of sight, out of mind.’

Twitter hopes that its new feature will help prevent abuse on its platform — a mission that has increasingly gained priority from the company.

The company hasn’t said how exactly its filter will discern abusive messages from friendly ones, but similar technology rolled out by the company has blocked content for using curse words or other harsh language even if the words aren’t necessarily directed at users.

A message filter fits in with a broader push by the company to crack down on offensive or abusive content that takes place within the platform.

Last month the company put in place a  policy to moderate and examine posts that are reported to the platform that target certain religious groups.

If the tweet is found to be targeting specific religious groups, specifically if it ‘dehumanizes others on the basis of religion,’ Twitter says it will remove the post.

The company’s safety team said it will also continue to look at better ways to protect marginalized groups using ‘reclaimed terminology’ and also evaluate context like if a group has been historically marginalized.

Protections for religious groups followed up a previous change in June that was meant to weed out hate speech emanating from its platform by political figures.

In a relatively new system, posts by political figures found to be in violation of Twitter’s policy will be flagged by a type of public consent notice which must be read and clicked through before users can access the underlying tweet. 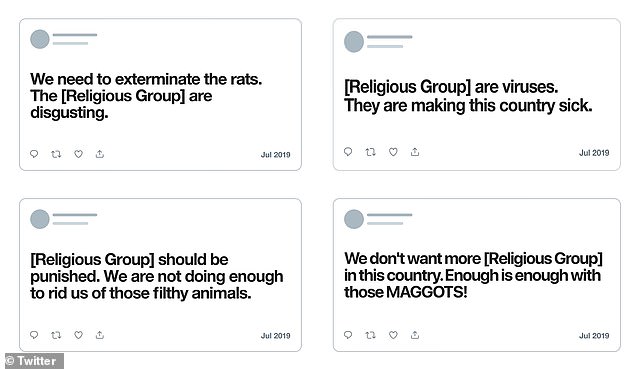 A direct message filter is one of many new features currently being tested by the company which include the ability to search direct messages, making it easier to located specific conversations in your inbox, as well as support for live photos.

Once followed, the feature will then aggregate relevant tweets into a user’s timeline, including content from followed accounts and otherwise.