Twitter comes under fire for not banning Trump over ‘racist’ remarks

Twitter has been accused of relaxing its anti-hate speech rules for not banning President Trump over ‘racist’ comments he made on the site against congresswomen.

Over the weekend, Trump went on a tirade against Democratic congresswomen who he said ‘couldn’t leave’ the country ‘fast enough’ because they had complained so much about how it is run.

Among those who he was describing was Ilhan Omar, Alexandria Ocasio-Cortez, Ayanna Pressley and Rashida Tlaib.

Trump fumed that all ‘originally’ had come from countries where governments were a ‘complete and total catastrophe’. 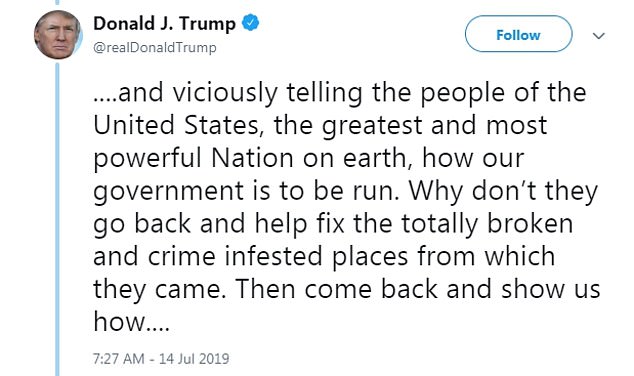 ‘Why don’t they go back and help fix the totally broken and crime infested places from which they came. Then come back and show us how it is done. These places need your help badly, you can’t leave fast enough,’ he said.

Twitter complained that it the tweets were ‘racist’ and questioned why Twitter, which announced it would ban people for using hate speech less than a week ago, hadn’t taken action against him for them.

‘So is Trump going to be banned from Twitter because of hate speak? We were all told that Twitter was going to drop any of us if we tweeted hate speak.

He is no better than anyone else. I guess if you are president you can be racist and be supported by Twitter,’ one user asked.

Another said: ‘Trump is so racist that I quoted Trump to one of his defenders and got banned… for racist hate speech,’ another said. 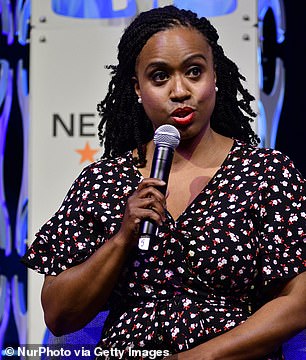 Freshman progressive Reps. Alexandria Ocasio-Cortez (upper left), Omar (upper right), Rashida Tlaib (lower left) and Ayanna Pressley (lower right) have been at odds with House leadership after becoming the only four to vote against against a $4.6 billion border bill

Parents from: Puerto Rico and America

‘If anybody else had posted a tweet as racist and vile they would have been suspended or banned from Twitter. It’s disgraceful,’ another said.

‘Why hasn’t Trump been banned from Twitter for his recent blatantly racist tweets? Do they not violate Twitters (sic) standards?’ another asked.

Some tagged Jack Dorsey, Twitter’s CEO, directly and asked him beneath Trump’s comments.

‘Jack, this is highly racist to suggest that our congresswomen of color should leave the US, return to “their country”.

‘Trump should be banned from Twitter for this racist statement,’ the user said.

Twitter spokesman Brandon Borrman said on Monday: ‘The Tweets in question are not in violation of the Twitter Rules.’

But the company would not elaborate when contacted by DailyMail.com.

Last week, the company issued new rules for hate speech and what would be tolerated.

‘After months of conversations and from the public, external experts and our own teams, we’re expanding our rules against to include language that dehumanizes others on the basis of religion,’ it said.

The president has been widely condemned for the remarks from leaders of other countries and political supporters.

He doubled down on them over the weekend, denying that they were racist and instead condemned the ‘the many terrible things they say about the United States’ which he said ‘must not be allowed to go unchallenged.’