The Conservative party’s attempt to capitalise on tonight’s highly anticipated Love Island final by giving away merchandise alike to that on show has been met with disdain by bemused Twitter users.

CCHQ are running a competition to win a free water bottle, like those used by the show’s contestants carrying political slogans such as ‘don’t let Corbyn mug you off’.

On a special webpage, the Tories have told supporters they’re giving away clear water bottles with pink writing on ‘some with a political twist, some not so much’. It’s accompanied by a series of hashtags reading #FreeMerch #FinalCountdown #DontBeAMelt’.

On the show each contestant has a water bottle with their name on, viewers can also purchase these from ITV for £15.

CCHQ are giving away free water bottles, like those used by the show’s contestants carrying political slogans such as ‘don’t let Corbyn mug you off’ 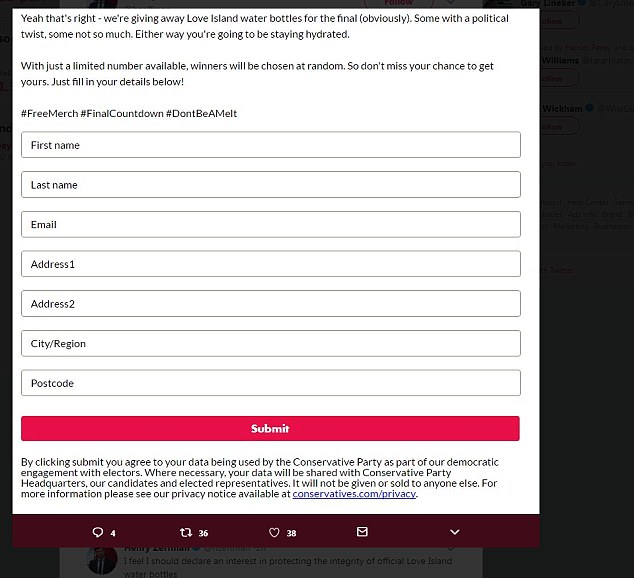 On a special webpage, the Tories have told supporters they’re giving away clear water bottles with pink writing on ‘some with a political twist, some not so much’.

But their stunt – an apparent plea to get the attention of Love Island’s young viewers – has been met with mockery online.

One Twitter user wrote: ‘I remain amused at the Tories repeatedly sh** attempts to connect with young people, i’m not entitled to be paid a living wage and am gonna be in 50 grand debt after uni but OOO funny water bottle’.

Another said: ‘Do the Tories actually think this how you engage young people? How about cool concepts such as student loans and the housing crisis? Y’know, the proper issues?’

A third pointed out the party missed a trick with the double entendre with use of ‘mug’. ‘Wouldn’t his work better if they were, I don’t know, mug, not water bottles’ one wrote.

Others were concerned with copyright breached and the lack of authenticity with the real bottles: ‘Not only is this embarrassing, but as rightly pointed out, you can only put a maximum of 15 characters on official Love Island bottles, so the Tory government is giving away bootleg, pirate #LoveIsland bottles with messages to slag off Corbyn. STATE. OF. IT’ one said.

Contestants in the villa each have a personalised water bottle with their name of it (pictured: Dani Dyer and Jack Fincham)

The competition comes after a political think-tank urged the Tories to broaden its appeal or face being wiped out for a generation.

Manchester’s Lucy Powell, Birmingham’s Jess Phillips and Walthamstow’s Stella Creasy who appeared on This Morning to discuss their love of the show and even sneak out of Parliament to watch it on their breaks.

Ms  Powell said: ‘The annoying thing is that the parliament TV doesn’t have ITV2 as a channel.

‘We have to go together and watch it on the app on our iPads and we have to arrange to do that, but don’t tell anyone that!’ 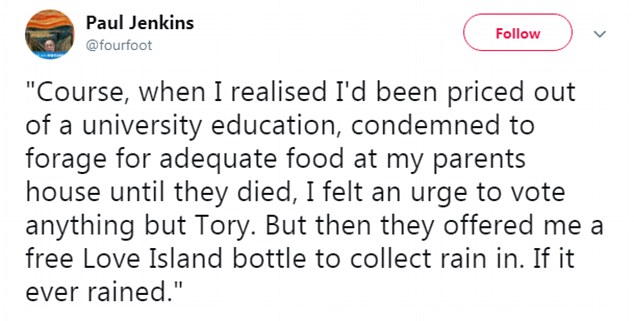