These days, every time another industry starts to suffer or a long-held tradition begins to decline, the change is blamed on millennials.

Millennials have been blamed for killing everything from home ownership to casual dining restaurants to golf, but now they’re getting credit for ‘killing’ something that’s generally considered a bad thing, anyway: divorce.

Way to go, millennials! New data shows that divorce dropped 18 per cent from 2008 to 2016, and the change has been attributed to the habits of millennials 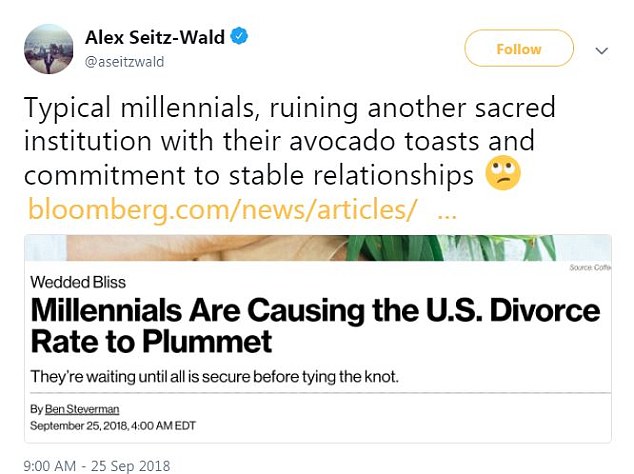 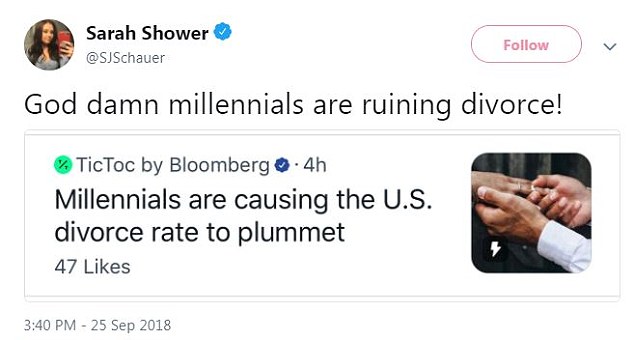 There they go again! Most are jokingly complaining about ‘damn millennials’ ruining something else

And according to analysis of US Census data by University of Maryland sociology professor Philip Cohen, that’s all thanks to millennials, as well as younger members of Generation X.

According to the Pew Research Center, millennials are those who were born between 1981 and 1996, making them 22 to 37 years old.

Cohen explained that millennials are waiting longer than Baby Boomers to tie the knot, and as such, have become less likely to divorce.

When the new data was published earlier this week, social media users found the news promising — but also particularly funny, in light of the trend of blaming millennials for industries that have died off. 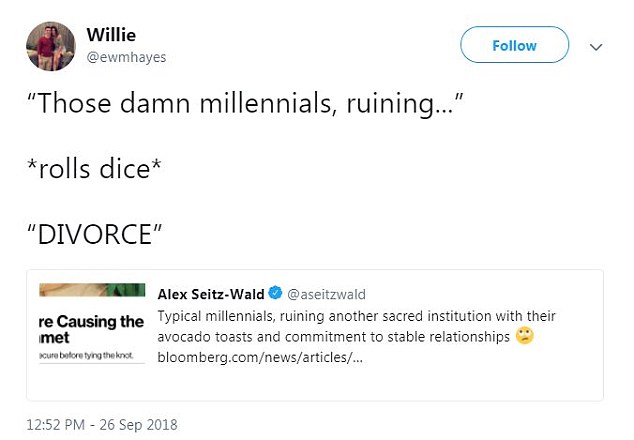 RandomThis one imagined how headlines are written about millennials, dreaming up a roll of the dice to see what industry they’re killing next

Nothin’ to say, Boomers? Most of the people tweeting are millennials 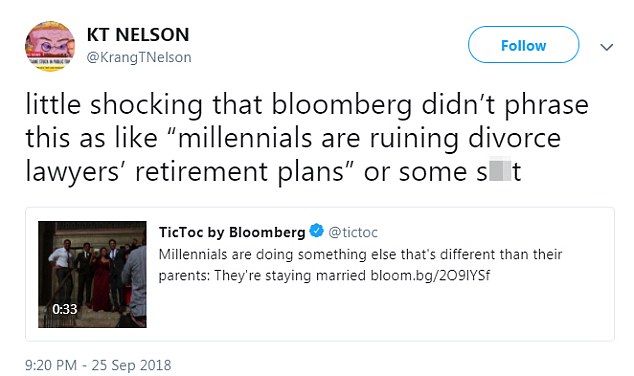 One LA resident tweeted: ‘MILLENNIALS ARE KILLING THE “ARGUE IN THE MIDDLE OF A CHURCH PARKING LOT IN FRONT OF HALF THE NEIGHBORHOOD” INDUSTRY.’

‘Little shocking that bloomberg didn’t phrase this as like “millennials are ruining divorce lawyers’ retirement plans” or some s***’ tweeted someone else.

According to Professor Cohen, the shrinking divorce rate is due in large part to younger people waiting longer to get married in the first place.

By the time many say ‘I do’ these days, they’ve already gotten their education, careers, and finances in order.

Comedian Matt Fernandez quipped: ‘New data shows that millennials are lowering the divorce rate because they’re waiting until they’re financially stable to get married. So I did the math, and that means I should be ready for marriage when I’m 400 years old.’ 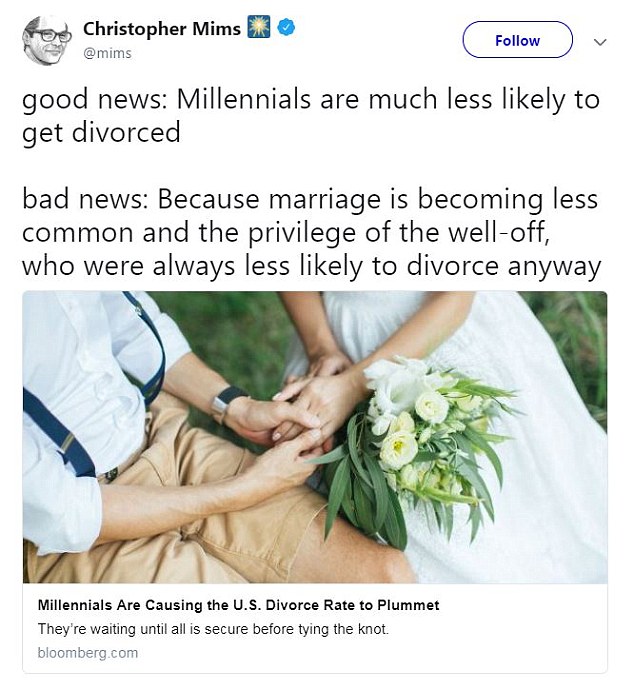 Waiting: Some pointed out that even marriage is becoming less common 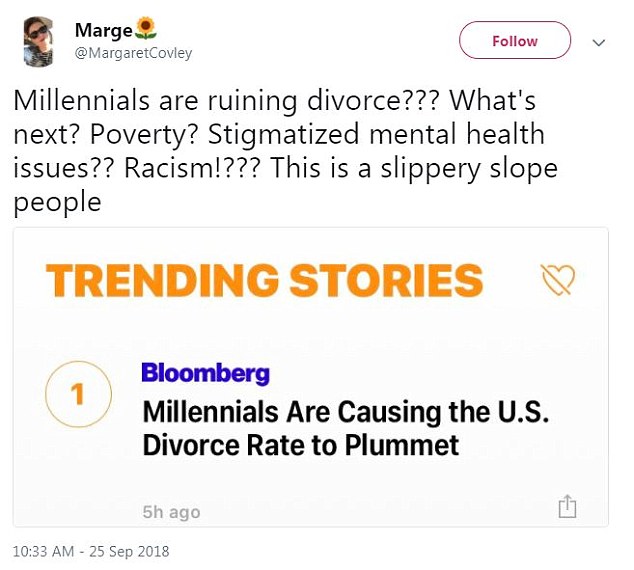 A good thing! This person joked about the other bad things millennials could ‘ruin’

Choosy: Millennials are waiting longer to choose a partner

Waiting longer means millennials are being choosier, too, dating more and longer before settling on a lifelong partner.

‘Divorce rates are down 18% b/c unlike their parents, millennials aren’t marrying the first Tom, Dick, or Sherry that comes around,’ joked one young woman from Chicago.

Evidence suggests other reasons for the change, too, including that many young couples are putting off marriage in favor of simply cohabitating long term.

Explained the Wall Street Journal’s Christopher Mims, ‘Food news: Millennials are much less likely to get divorced. Bad news: Because marriage is becoming less common and the privilege of the well-off, who were always less likely to divorce anyway.’

And for some, it seems, the option to divorce is in itself too costly.

‘People are surprised that millennials are forcing the divorce rate to plummet like we can financially afford to build a life up together with someone else,’ wrote one person on Twitter. ‘LOL sorry you said till death and we have loans and a shared Netflix.’ 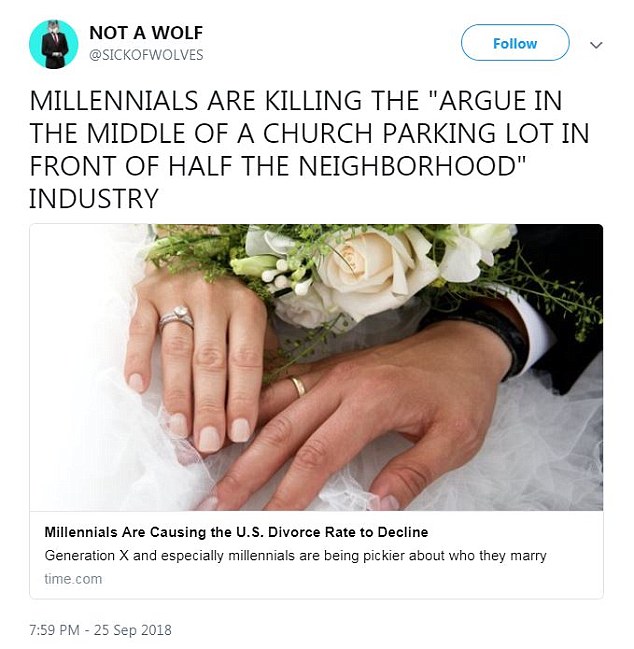 Hold up: Many young couples are putting off marriage in favor of simply cohabitating long term, another reason for the change

Smart: Younger people are waiting until they have their careers in order and are financially stable

Strapped: Some have said divorce is for those who can afford it

Cohen told DailyMail.com that another reason for the decline in divorce is that  Americans ‘don’t feel pressured to marry before they have sex, have children or live together.’

The overall decline is likely only the beginning of a new era in American marriage trends, Cohen said.

‘The trend in new marriages is toward those with lower divorce risks,’ he writes. ‘The composition of new marriages, along with the shrinking demographic influence of Baby Boom cohorts, all but guarantees falling divorce rates in the coming years.’

Even after Cohen controlled his analysis for factors including age and years married, the decline in divorce was still 8 percent.

Cohen attributes the overall drop ‘entirely’ to younger women, as it seems they are more likely to delay their vows, resulting in marriages that last longer and are less likely to end in divorce, ultimately predicting they ‘will have lower divorce rates than today’s older women’ – and be more economically stable in those marriages. 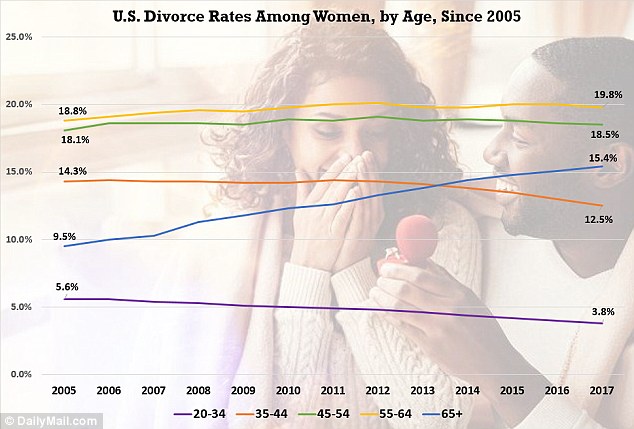 Sociologist Philip Cohen said young women are driving the overall decrease in divorce in America. This graph illustrates the incidence of divorce for different age groups since 2005. The youngest cohort – women age 20-34 are the least likely to get divorce, and their incidence of divorce has fallen by 1.8 percent since 2005

Cohen notes that the decline in divorce comes at the same time that premarital cohabitation is on the rise and as attitudes about divorce have grown more accepting.

‘The trends … represent progress toward a system in which marriage is rarer, and more stable, than it was in the past,’ Cohen wrote.

As divorce rates have declined for younger people, they have increased among people in their 60s and 70s. The divorce rate doubled among Americans age 55-64 from 1990-2015, and tripled among those age 65 and older during the same period, according to Bowling Green State University’s National Center for Family and Marriage Research.

At the same time, many low-income and under-educated Americans are choosing not to marry at all, instead opting to live together and in many cases raise children together.

‘It’s also an inequality story,’ Cohen said. ‘The “haves” are increasingly the ones who get and stay married.’

In fact, a quarter of parents who live with their children are unmarried, according to Pew Research Center.

Pew researchers characterized the overall shift as ‘the declining stability of families’ and linked the trend to the rise in unmarried people cohabitating — relationships which Pew claims don’t tend to last as long as marriages.