New Twitter owner Elon Musk seems to be doing his bit to put cinemas out of business in the latest round of chaos on the platform.

Twitter users have been able to post full-length films in series of tweets, in an apparent violation of the platform’s own copyright rules.

One user went viral for uploading the whole of ‘The Fast and the Furious: Tokyo Drift’ in two minute segments spanning nearly 50 tweets.

Other films posted included ‘Hackers’, ‘Avatar’, ‘Kamen Rider Heisei’ and ‘Need for Speed’, which as of writing is still available to view over 66 tweets.

In fact, the Twitter account that posted ‘Need for Speed’ (@NFSpeedMovie) was created this month seemingly for the sole purpose of sharing the film.

An entire 10-minute episode of SpongeBob SquarePants has also been tweeted by another account (@FandomMenaceLs) and is also yet to be removed after being liked 92,000 times and counting.

One user said Twitter’s copyright detection system is ‘no longer working’, while another said the company could be ‘sued into oblivion’.

One user went viral for uploading the whole of ‘The Fast and the Furious: Tokyo Drift’ in two minute segments spanning nearly 50 tweets 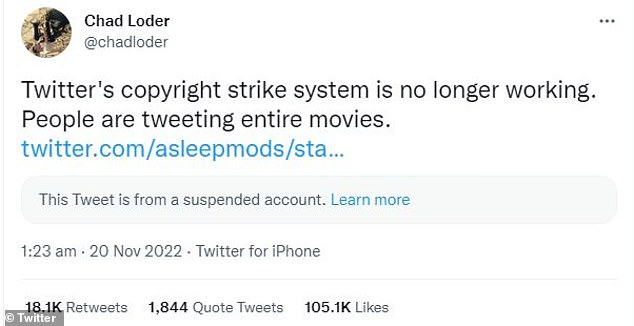 One user said Twitter’s copyright detection system is ‘no longer working’, while another said it could be ‘sued into oblivion’

What are Twitter’s copyright rules?

Twitter’s copyright policy prohibits any unauthorized use of a copyrighted video.

Twitter usually has an automated copyright enforcement system that takes down unauthorized content, but this appears to be ‘broken’.

This may be due to the recent drastic fall in Twitter staff, as a result of new owner Elon Musk’s staff cuts and other voluntary resignations.

The account that posted ‘The Fast and the Furious: Tokyo Drift’ (@anally_retended) has been suspended, but their 49-tweet thread was only taken down after being up for nearly a day, according to one user.

However, a Forbes reporter has said he has still been able to watch the film in the tweets even after the account was removed, because he bookmarked the tweets.

All of this is in flagrant contradiction of Twitter’s own copyright policy, which bans any unauthorized use of a copyrighted video.

It’s one of many problems at Twitter brought on by Musk’s ownership, which reached a concerning head last week with mass employee resignations. 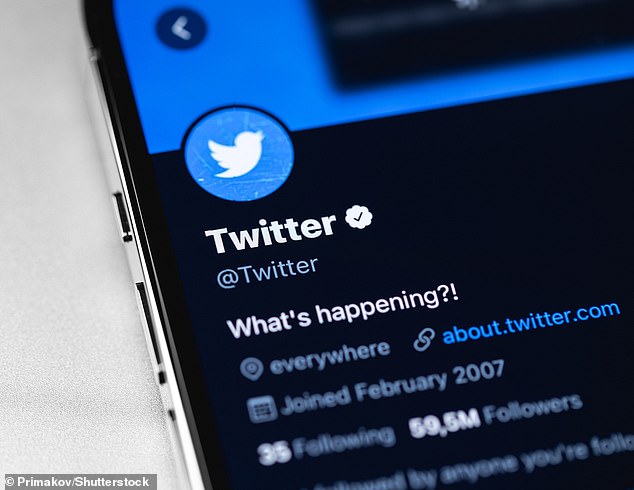 Instagram’s message was an acknowledgement of its presence on the rival platform, which has been owned by Musk since the end of October.

But the tweet has since been deleted for unknown reasons.

Last Wednesday, Musk sent an email to Twitter staff and gave them a 5pm ET Thursday deadline to either click a link confirming their willingness to work ‘long hours at high intensity’, or leave the company with three months severance pay.

The email said employees will need to be ‘extremely hardcore’ if the firm wants to ‘build a breakthrough Twitter 2.0’, meaning staff will have to endure ‘long hours at high intensity’ going forward.

But the email reportedly sparked a wave of resignations and around 75 per cent of all 3,700 remaining workers at the firm opted to ignore the email, suggesting they did not want to stay.

According to Reuters, the departures included many engineers responsible for fixing bugs and preventing service outages, raising questions about the stability of the platform.

What’s more, Twitter staff who opted to stay were locked out of their offices until Monday without an explanation.

In a message sent to Twitter staff seen by the BBC, the firm said office buildings would be temporarily closed with all badge access suspended until then.

Twitter had 7,500 full-time employees at the end of October, which dropped to about 3,700 after mass layoffs this month, according to the New York Times – although his will have dropped further after Musk’s ‘hardcore’ email.

Musk, who has a habit of flippantly referring to the drama at Twitter as it happens, posted on Friday: ‘How do you make a small fortune in social media? Start out with a large one.’

He later added: ‘The best people are staying, so I’m not super worried.’

After more than 15 million votes, 51.8 per cent voted to let Trump have his account back, nearly two years after he was banned following his role in last year’s attack on the US Capitol. 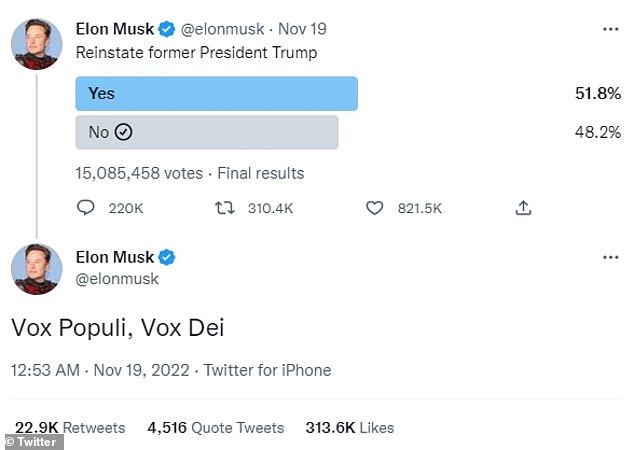 However, Trump’s account is yet to reappear and the former leader of the free world said on Saturday said he had no interest in returning.

Trump has already created his own social media platform, called Truth Social, which presents an ‘uncensored’ alternative with more of a focus on free speech.

Many Twitter users have been starting up accounts on Mastodon, an open-source platform founded by a German software developer called Eugen Rochko in 2016.

Mastodon has microblogging features similar to Twitter but describes itself as a ‘decentralized’ alternative that doesn’t have ‘a single company monopolizing your communication’.

According to Mastodon, it gained more than 70,000 new sign-ups on October 28, the day after Musk finalised his takeover of Twitter.

On November 12, Rochko said there are one million more people using Mastodon than there were on October 27, the day of the takeover.

On November 18, almost 180,000 new users joined Mastodon – a new record for the platform – and there are now 2 million monthly active users.

In comparison, it’s estimated Twitter has more than 300 million users, but while Mastodon’s userbase is growing, Twitter’s is thought to be falling.

According to physicist Esteban Moro, Mastodon sign-ups peaked for the first time after Musk completed the purchase, again after he began laying off a substantial portion of Twitter’s staff, and again after his ‘hardcore’ ultimatum last week. 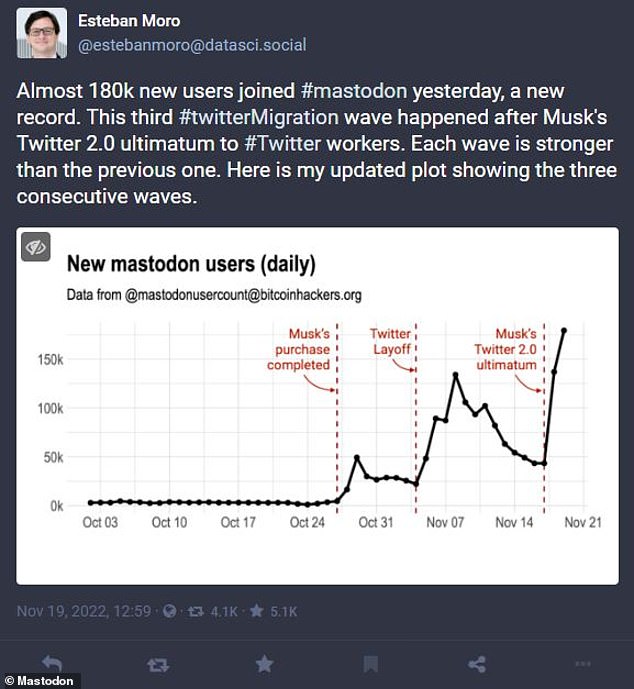 According to data scientist Esteban Moro, Mastodon sign-ups have seen three peaks – one after Musk completed the purchase, another after he began laying off a substantial portion of the company’s workforce, and another after Musk’s ‘hardcore’ ultimatum last week

Musk – who took out a large loan to buy Twitter for $44 billion (£38 billion) at the end of October – soon faces the prospect of being saddled with immense debt, which could bankrupt Twitter.

He’s already said in a tweet on November 4 that his company is losing $4 million (£3.4 million) per day.

In a leaked internal email dated November 9, Musk said there was ‘no way to sugarcoat the message’ that Twitter ‘will not survive’ if its business model doesn’t change.

Advertisers have already pulled out of Twitter in large numbers, scared by the bad publicity and the reported increase in hateful content on the platform.

Musk has revealed several upcoming changes to the platform that have failed to impress users, including making the blue tick next to an account name exclusive to Twitter Blue, the platform’s paid subscription option.

The rollout of the feature as part of Twitter Blue was plagued with problems, including users impersonating celebrities and public figures, so Musk delayed it until November 29 to make sure ‘that it is rock solid’.

Twitter will also be ditching the 280 character limit to allow longer tweets ‘soon’, the billionaire owner said on Thursday.

Elon Musk has postponed the relaunch of Twitter’s paid subscription service after a first attempt saw an embarrassing spate of fake accounts.

‘Punting relaunch of Blue Verified to November 29th to make sure that it is rock solid,’ Musk tweeted, delaying his new revamp, originally promised for Tuesday, by two weeks.

The bid for more time came after authentic-looking fake accounts proliferated on the website, which Musk bought for $44 billion late last month, throwing his plans into chaos.

In an apparent attempt to avoid a repeat of the problem, Musk tweeted that in the new release, ‘changing your verified name will cause loss of checkmark until name is confirmed by Twitter to meet Terms of Service.’

The $8/month Twitter Blue service originally rolled out last week, leading to a wave of accounts impersonating celebrities by changing the name on their account and paying to get a blue tick next to it.

For example, Twitter user @nlntendodoofus was able to change their account name to ‘Nintendo of America’ and get a blue tick to make it look official.

Before being suspended, the fake Nintendo account tweeted an image of the Japanese firm’s mascot Mario with its middle finger up.

Meanwhile, a LeBron James parody account claimed the basketball player was ‘officially requesting a trade’ from his current side LA Lakers to another team.

And another account fooled users into thinking it was former US President Donald Trump by tweeting: ‘This is why Elon Musk’s plan doesn’t work.’

Most of the fake accounts with blue ticks appear to have been suspended, although some were up for several hours.

Twitter Support said it is ‘aggressively going after impersonation and deception’.