Twitter users have voiced their disappointment as it emerged that the iconic Captain Li Shang might not appear in Disney’s live-action remake of Mulan.

Casting decisions for the upcoming film, whose released has been pushed to 2020, indicate that Shang, Mulan’s love interest in the 1998 animated movie, will not be featured in the new version.

Instead, it seems that Mulan will be faced with a new character named Chen Honghui, presented as a soldier with a ‘mean, bullying streak’ who doesn’t take kindly to Mulan’s ability to outperform him—until he realizes she is a woman.

Character: Twitter users have voiced their disappointment as it emerged that the iconic Captain Li Shang (right) might not appear in Disney’s live-action remake of Mulan

Chagrin: Casting decisions for the upcoming film indicate that Shang, Mulan’s love interest in the 1998 animated movie, will not be featured in the new version

The role of Honghui is one of two that appear in a casting call that has circulated online, along with the part of Mulan.

Honghui is described in the document as ‘another recruit who joins Commander Tung’s unit’, who is ‘determined to be the best soldier in human history’.

‘Full of himself, with a mean, bullying streak to him, he quickly realizes that Mulan is his chief rival, but he does not realize that she is a woman,’ the casting call states.

‘Grittily determined to be simply the best at everything, Honghui is increasingly peeved by Mulan’s ability to match or out-maneuver him.

‘But after learning that his rival is a woman, his intense feelings of rivalry turn into something very different, something like love.’ 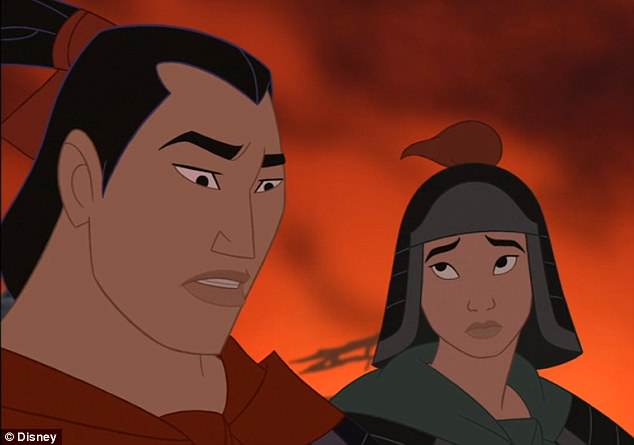 Icon: Shang has become a beloved character in Disney’s line-up; some fans believe he could be bisexual due to his bond with Mulan when she poses as a man 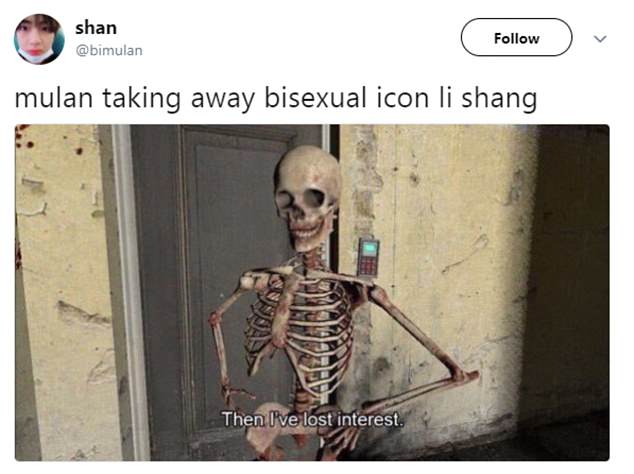 Not interested: Fans of the franchise took to Twitter to voice their disappointment once faced with the prospect of a remake without Shang 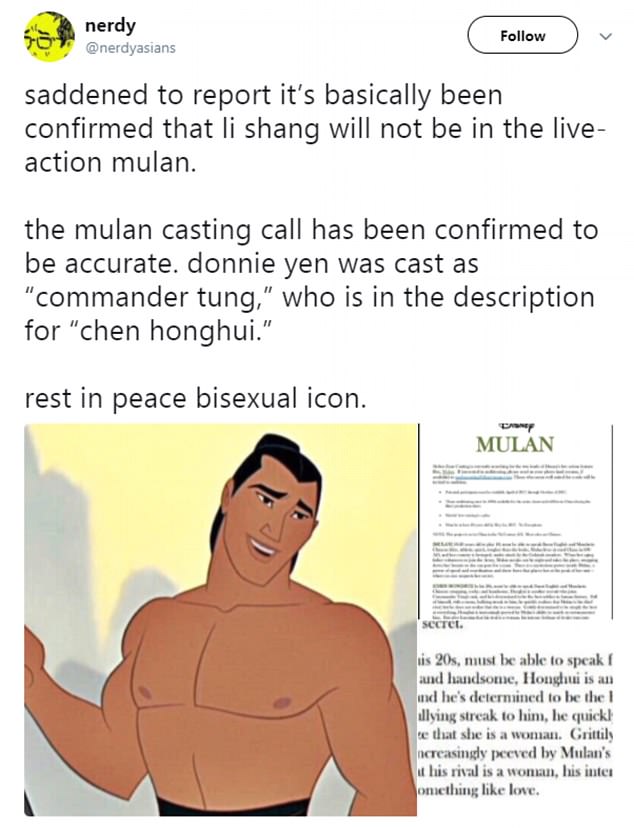 ‘Sad’: Twitter account @nerdyasians, which specializes in Asian culture news, said Shang’s disappearance from the plot has ‘basically been confirmed’ based on casting decisions

Mulan, meanwhile, is introduced as ‘lithe, athletic, quick, tougher than she looks’, and ‘lives in rural China in 630 AD’.

When her country is besieged and attacked by Gokturk invaders (the Gokturks were a nomadic confederation in inner Asia), Mulan sneaks out and takes the place of her aging father to join the army, passing for a man.

The plot as it is outlined in the casting call presents a few major differences from that of the 1998 movie, in which Mulan, too, takes her father’s place to defend her country, but against the Huns.

As a soldier, she gets to know Captain Shang while posing as her male alter-ego, Ping. Their bond has led many viewers to believe Shang could have been bisexual, given that he seemed attached to Mulan before she was revealed to be a woman.

Disney has announced several casting decisions so far, but none for the role of Li Shang, another sign that the beloved character might not be a part of the remake.

Actress Gong Li, meanwhile, has been chosen to play the upcoming movie’s main antagonist, a witch.

Protagonist: Chinese actress Liu Yifei, meanwhile, has been cast as Mulan in the new movie 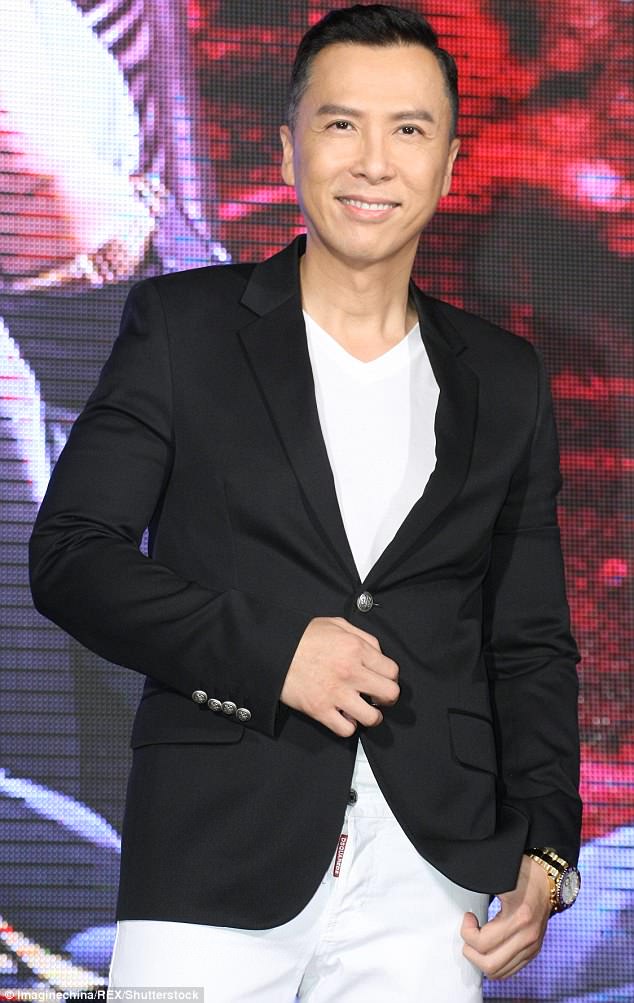 The decision to apparently replace the 1998 film’s villain, the male Hun leader Shan Yu, by a female witch, was another point of grievance for those awaiting the new movie.

They made their voices heard on Twitter after the account @nerdyasians, which specializes in news related to Asian culture, said Shang’s disappearance from the plot has ‘basically been confirmed’ following Yen’s casting as Commander Tung.

Tung is mentioned in the casting call for Honghui—presumably Shang’s replacement.

Another person wondered: ‘How do I protest to keep Li Shang in the live-action Mulan?

Someone else commended Disney for casting a Chinese actress in the role of Mulan but lamented the apparent decision not to feature Shang, writing: ‘When you wanna support the upcoming Mulan remake because Disney cast a gorgeous, talented actress who’s actually Chinese to play Mulan but they’re also replacing bisexual icon Li Shang with a random misogynistic dude who’ll overshadow Mulan’s journey and add zero good elements to the story.’

One person also protested the decision to include a witch in lieu of the 1998 movie’s villain in a tweet that read: ‘A witch in Mulan? All I ask is for the iconic songs and bisexual icons Li Shang and Mulan to rise wtf are they doing.’

The live-action remake of Mulan was originally supposed to come out in 2018 before being delayed to 2020.

Both the live-action and the animated movies are inspired by Hua Mulan, a female warrior mentioned in the Ballad of Mulan. The poem, written in the fifth or sixth century, tells the story of a woman who takes her father’s place to serve in the army.