People are outraged to learn that Disney is selling ‘Forky’ toys for upwards of $60 when the new character from Toy Story 4 was literally made by a child using everyday household items.

In the new animated film, a kindergartner named Bonnie takes a spork, a pipe cleaner, and popsicle sticks to make a toy she calls Forky. Naturally, Disney promoted the movie and its newest character with a series of toys.

Parents can now buy their children everything from a $9.99 creativity set to ‘make your own Forky’ to a $58.99 interactive doll that walks, talks, and dances, but some people think the entertainment giant has gone too far with its merchandise.

Seriously? People are slamming Disney for selling ‘Forky’ toys inspired by a character in Toy Story 4 that is made of a spork 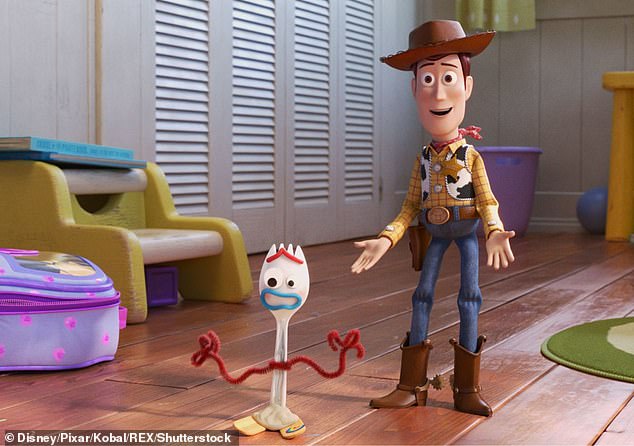 Arts and crafts: In the new animated film, a kindergartner named Bonnie takes a spork, a pipe cleaner, and popsicle sticks to make a toy she calls Forky

Critics have been taking to Twitter to gripe about the plastic toys, claiming children would be better off making Forky for themselves as Bonnie does in the film.

‘Disney really taking advantage of capitalism by selling licensed Forky toys for $20-$0 & all, when you can go to the grocery store, get sporks, & all the material to make your own personal Forky for like $10,’ one person wrote.

‘The fact they selling Forky toys for $55 dollars when you can literally just make him is driving me crazy,’ another commented.

Someone else tweeted: ‘I am concerned that Disney is selling Forky as a plastic toy when he is literally a spork with googly eyes and pipe cleaner arms.’ 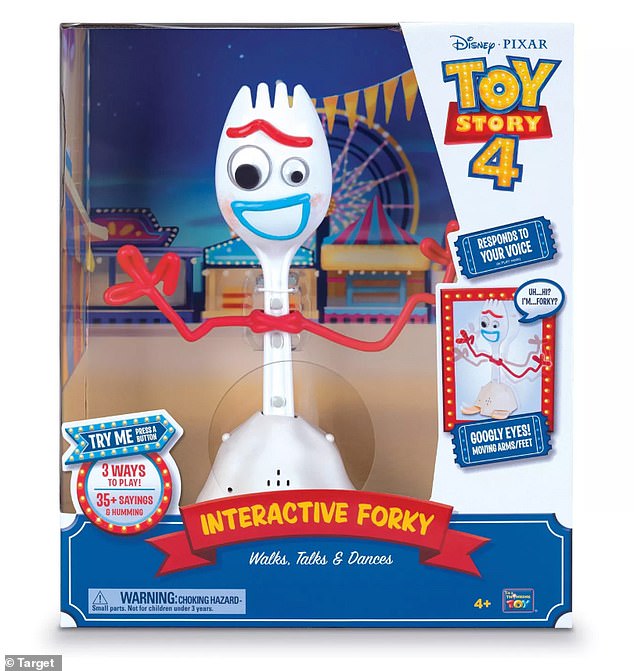 Say what? Disney promoted the movie and its newest character with a series of toys, including an ‘Interactive Forky’ that is retailing for $58.99 at Target 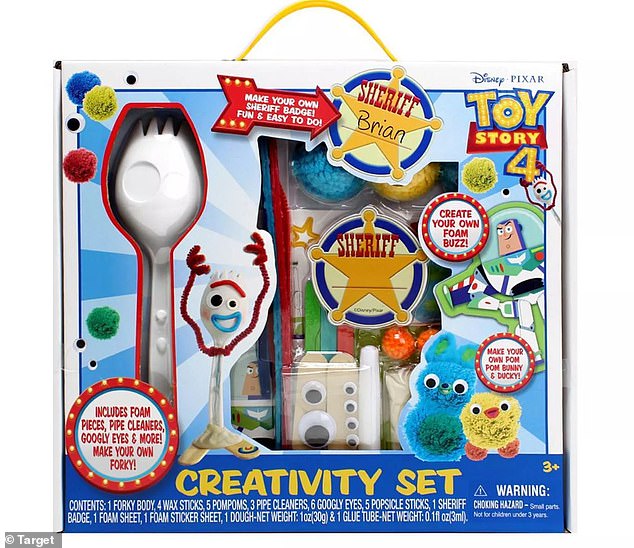 Popular item: A Toy Story 4 creativity set to ‘make your own Forky’ is retailing for $9.99 at Target but being sold for double the price on eBay

Aside from the price, some were disappointed to see a manufactured version of the toy that is supposed to represent the value of creating something for yourself.

‘I think the saddest thing I’ve seen is Disney selling toys of Forky when the message of the movie was how great it was for Bonnie to express her creativity and [create] her own precious memories,’ one Twitter user wrote.

‘Are they fr selling Forky toys??’ someone else asked. ‘YA KIDS CAN LITERALLY MAKE HIM.’

Despite the backlash over Disney’s Forky toys, people have been scooping them up left and right, leading many retailers to sell out of particular items. 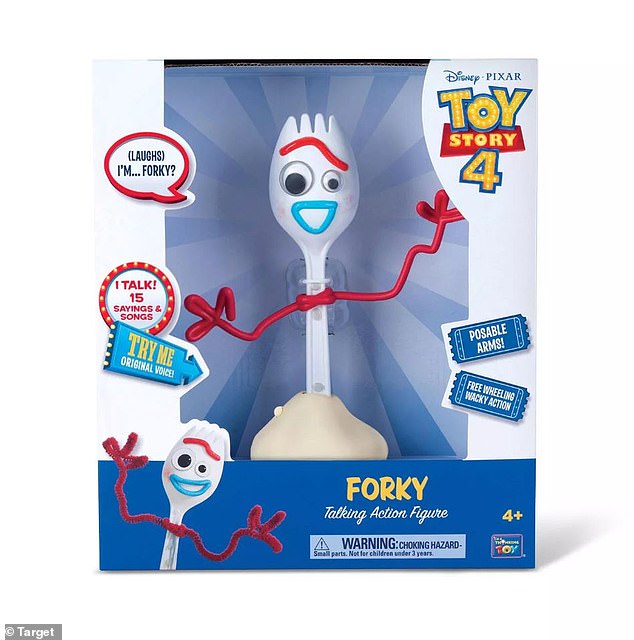 Over it: A Forky ‘Talking Action Figure’ is being sold at Target for $27.99. Critics have been taking to Twitter to gripe about the toys, claiming kids would be better off making their own 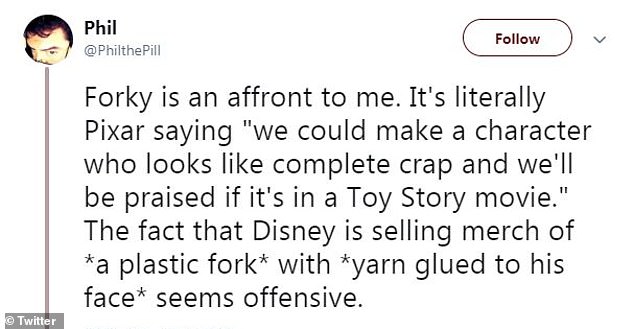 The creativity sets are being sold for about double the price on eBay, and some people can understand the attraction.

‘Disney is really out here selling Forky from Toy Story 4 craft kids and I want one lol,’ one Twitter user admitted.

Toy Story 4 has earned $346.5 million domestically since the film debuted on June 20, according to Forbes.

But the release of the film’s licensed toys hasn’t exactly been smooth sailing. 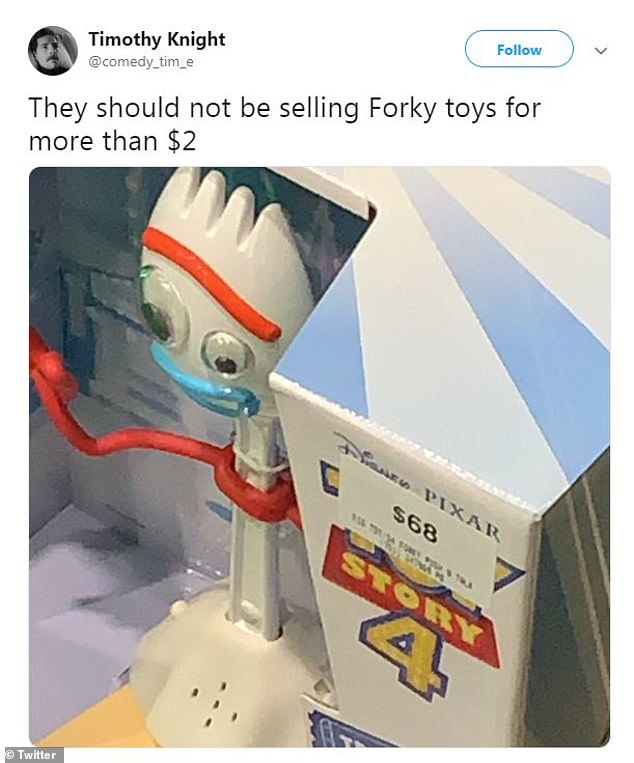 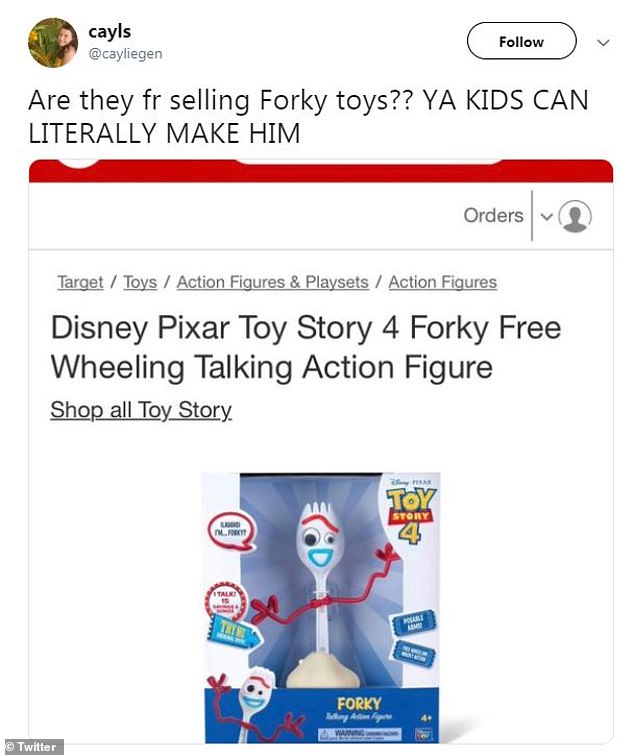 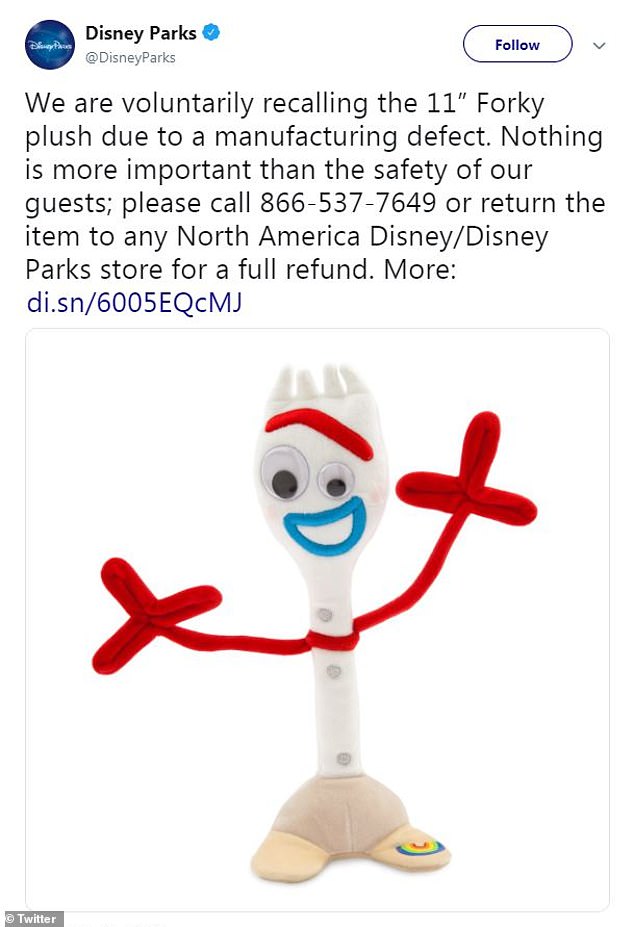 Say goodbye: Disney voluntarily issued a recall on its 11-inch plush Forky toy earlier this month. The toy has plastic eyes that can detach and pose a choking hazard for young children

Earlier this month, Disney voluntarily issued a recall on its 11-inch plush Forky toy, which has plastic eyes that can detach and pose as a choking hazard for young children.

The toy, which was manufactured in China, has ‘poseable arms, a base, rainbow screen art on top of foot and plastic rolling  “googly” eyes,’ according to the U.S. Consumer Product Safety Commission.

‘Consumers should immediately take the recalled toy away from children and return it to any Disney Store retail location, Walt Disney World, or Disneyland Resort theme park retail store location for a full refund.

There haven’t been any reports of incidents or injuries as of yet.