There are plenty of sources of annoyance these days, ranging from cabin fever concerns to much-needed products running low in stores.

But for some people, one of the most infuriating problems of the moment is caused by clingy, oblivious lovebirds.

While most people are doing their best to adhere to social distancing, Twitter is alight with complaints about couples who refuse to walk single-file on the sidewalk, leaving no room for others to pass them at a safe distance.

Self-centered: Twitter uses are railing against ‘couple spreading,’ when couples walk side-by-side and don’t leave room for people to pass at a safe distance (stock image)

Get a clue! Many are raging that these people should know to switch to walking single-file when they pass another person

The complaints have been pouring in on Twitter in recent days.

‘Couples walking need to learn sidewalk etiquette. I promise you won’t die letting go of your partner’s hand for 10-15 seconds and walking behind each other to let someone get by you,’ griped one user.

‘Couples and families: WALK SINGLE FILE FOR GODSAKES WHEN OTHERS ARE ON THE SIDEWALK!’ complained another.

‘If you are out getting fresh air and walking on a sidewalk in this #covid19 pandemic & you are a couple here’s a tip — walk SINGLE FILE when passing others on a sidewalk. It’s not a big ask,’ wrote The Jill Bennett Show host Jill Bennett. 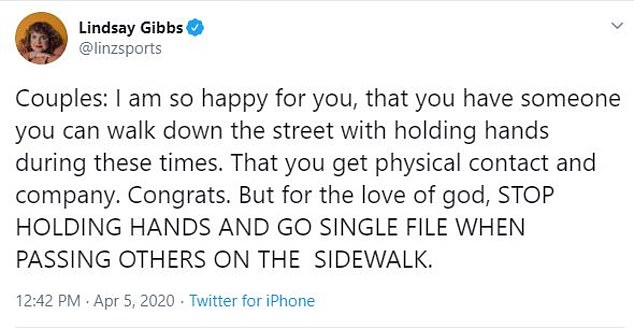 Leave some room! Couple-spreading is especially rude during the pandemic, when people are supposed to keep six feet apart

Burn It All Down podcast host Lindsay Gibbs tweeted: ‘Couples: I am so happy for you, that you have someone you can walk down the street with holding hands during these times. That you get physical contact and company. Congrats. But for the love of god, STOP HOLDING HANDS AND GO SINGLE FILE WHEN PASSING OTHERS ON THE SIDEWALK.’

Others promised these couples that walking single-file for just a few moments wouldn’t cause them to break up.

‘PSA to all the couples who can’t walk single file on a sidewalk when passing other pedestrians: I assure you that doing so will not be the reason for the dissolution of your lacklustre relationships,’ quipped one.

Another person called ‘clueless couples’ walking two-abreast ‘the biggest threat to my health right now, adding: ‘If a sidewalk isn’t wide enough to give someone walking toward a couple six feet of space, they should walk single-file for a whopping ten seconds. This isn’t rocket science.’ 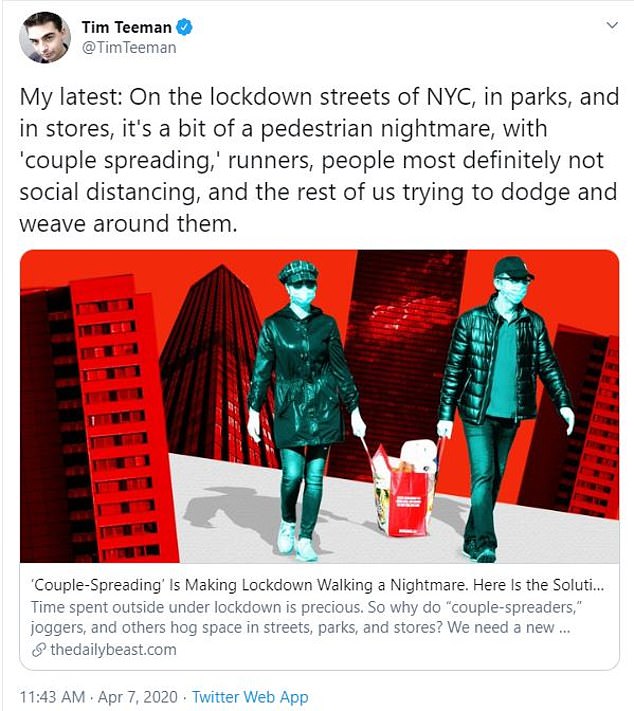 A name for it! The habit has proven so annoying that Tim Teeman wrote an entire article on the subject for The Daily Beast 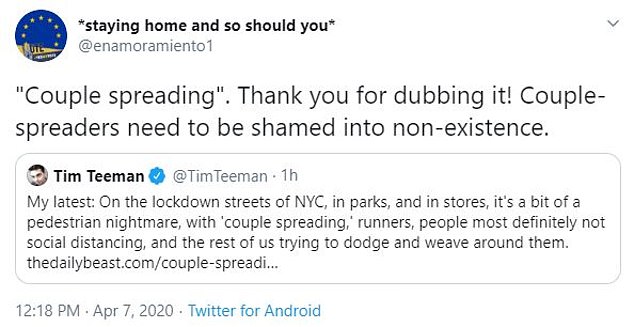 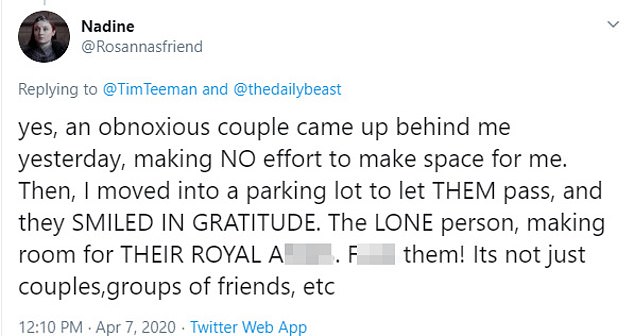 Yes! Other social media users have found the perfect term to describe couples who make no move to make way for others

The habit has proven so annoying that Tim Teeman wrote an entire article on the subject for The Daily Beast, calling out ‘couple-spreaders’ who make social distancing harder for everyone else.

‘Couple-spreading is a sidewalk problem for the ages, now made newly annoying,’ he wrote.

‘The many violations of street etiquette are obviously not the most terrible thing happening around us, but they are enraging in the way that all thoughtlessness is enraging,’ he went on.

‘They are doubly enraging because the coronavirus crisis cloaks everything, and thoughtless behavior shows that some people’s own self-interest still trumps all. They can’t even do the smallest thing to make the world around them just that tiny bit better.’

In his piece, many other social media users have found the perfect term to describe couples who make no move to make way for others. 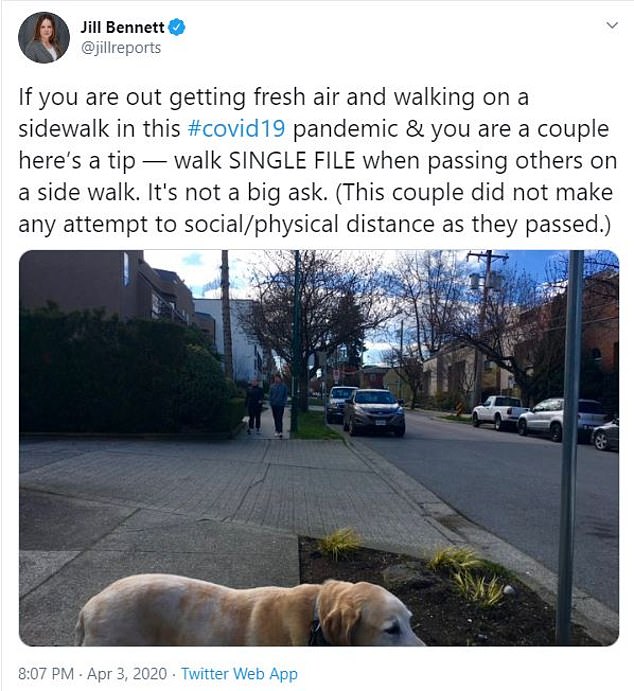 Pay attention! Couple-spreaders are being called ‘thoughtless,’ ‘clueless,’ and ‘selfish’

‘”Couple spreading”. Thank you for dubbing it! Couple-spreaders need to be shamed into non-existence,’ one commented.

‘I’ve been b***ing about these jerks for decades. Now, their obliviousness is a potential murder weapon,’ wrote another.

‘Yes, an obnoxious couple came up behind me yesterday, making NO effort to make space for me. Then, I moved into a parking lot to let THEM pass, and they SMILED IN GRATITUDE. The LONE person, making room for THEIR ROYAL A**ES. F*** them! Its not just couples,groups of friends, etc,’ complained yet another.

Teeman offers some advice for others who may be the purpetrators.

‘We should not be outside too much, and take up as little space as possible when we do,’ he wrote. ‘So ask yourself: Are you thoughtfully evaluating the space you are occupying next to your fellow humans, or are you unnecessarily invading space?’