The comedian, 24, gave a talk at Auburn University in Alabama and was asked about his engagement to Ariana, 25.

He raved about their relationship, which culminated in their engagement in June, before claiming is penis is now ‘forever hard’ thanks to his new life partner.

Libido: Pete Davidson has left Twitter users both amused and distressed after saying his penis is ‘forever hard’ now that he’s engaged to Ariana Grande (pictured with him on Monday) 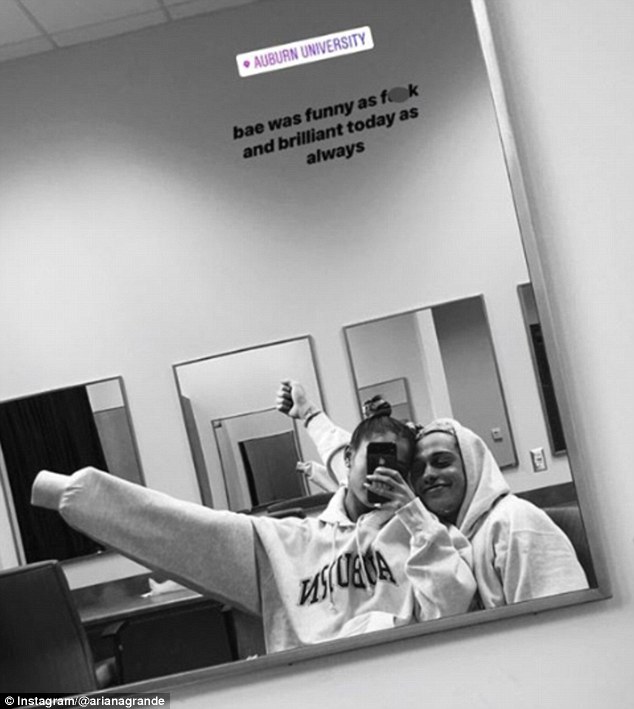 Praise: Ariana didn’t comment specifically on Pete’s remark but applauded his talk at Auburn University in her Instagram Story, saying he was ‘funny as f**k and brilliant today as always’

He added: ‘I’m a very, very happy boy who is very, very loved and I’m very lucky. And my d**k’s forever hard.’

Ariana didn’t comment specifically on Pete’s remark but applauded his talk in her Instagram Story, saying he was ‘funny as f**k and brilliant today as always’.

Twitter users, however, were more divided on the issue, with some finding Pete’s quip hilarious while others deemed it in poor taste.

‘Pete Davidson said his d**k is forever hard being engaged to Ariana and THAT’S the kind of love I’m looking for,’ one person wrote.

Another fan tweeted: ‘Pete Davidson saying “My d**k’s forever hard” when asked what it’s like to be engaged to Ariana Grande is the energy I need in my life.’

One outraged Twitter user wondered: ‘Pete Davidson said “My d**k’s forever hard” when being asked what it’s like to be married to Ariana Grande. How does anyone like this guy?’

Someone else took the remark to mean Pete looks at his fiancee ‘like a sex object’ and lamented his ‘immature’ approach to relationships.

Another person, however, thought the quip constituted ‘a BIG (relationship) MOOD’, while one person commented: ‘What a guy.’

They like it: Some Twitter users appreciated Pete’s joke, such as one person who deemed it ‘the energy I need in my life’

Not a fan: One person, however, reacted to Pete’s remark with the question: ‘How does anyone like this guy?’

This isn’t the first time Pete’s private parts have made headlines over the past couple of months.

In June, a fan asked Ariana on Twitter: ‘How long is Pete?’ adding: ‘OH AS IN THE INTERLUDE NOT AS IN……ANYWAY.’

The question was in reference to an interlude on her new album, which she has since renamed Pete Davidson.

Ariana, however, joked and answered the question as if it were about Pete’s genitals, writing in a now-deleted tweet: ‘Like 10 inches? …oh f—…i mean…like a lil over a minute.’

That same month, Pete became associated with the phrase ‘big d**k energy’, which describes the confidence of a well-endowed person.

It went viral after a Twitter user with the handle @babyvietcong wrote: ‘Pete davidson is 6’3 with dark circles, exudes big d**k energy, looks evil but apparently is an angel, and loves his girl publicly the only thing wrong w him is that he’s a scorpio but anyway…..id married him within a month too.’