The creativity of the internet struck again as Twitter users hilariously posted what people should attempt to achieve by the time they reach the age of 35.

The viral posts – which took off after financial media company MarketWatch told people how much they should have saved – each began with the phrase ‘by the age 35’.

One user suggested that people should ‘have figured out how to spell “bananas” without having to mentally sing Hollaback Girl.’

Creative: People took to Twitter to hilariously say what people should do by the age of 35 after a financial media company revealed how much everyone should save by that age

Classy: One Twitter user joked that at the age of 35 people should have two kinds of cheese in their fridge

Hoarder: One person commented on the amount of cables people accumulate over the years

But the humor didn’t stop there. Another Twitter user joked about the ‘fancy’ food items people should be able to buy at that age.

‘By age 35 you should have two kinds of cheese in your fridge at all times c’mon you’re an elegant lady you deserve it,’ the user wrote.

Another person referenced their inability to exercise self-restraint that should hopefully change by that age.

‘By the time you’re 35 you should have saved at least half your sandwich for lunchtime instead of noming it at 10am,’ the commentor said.

Royalty: Another person was having none of the viral tweets and said nothing should be expected of her because Meghan Markle didn’t become a duchess until the age of 36

Relatable: The most viral post out of all of them mentioned that one utensil that everyone has but refuses to ever throw away

Self-restraint: One person mentioned that she thought she would have more willpower at 35 to avoid eating her lunch early in the day

A post that was shared more than 35,000 referenced the hoarding that can occur with cables for electronic items.

‘By age 35 you should have a huge box of cables but you can’t throw them out because you’re pretty sure you still need a couple of them but you’re not sure which ones,’ the person wrote.

But the post that resonated the most with people on social media was about one pesky kitchen utensil that everyone seemed to have.

The Twitter user wrote: ‘By age 35 you should have at least one fork in your cutlery drawer that you just don’t like, and actively frown at if you accidentally grab it.’

Unheard of: An article shared by MarketWatch said that people should have twice their salary saved by the time they’re 35 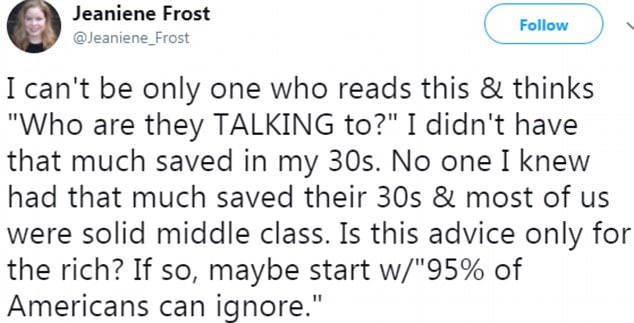 Ignore it: One person said that the article should be addressed to those who are already rich

Correction: Another person made some edits to the article and said that ‘you should have debt twice your salary’

These viral tweets began after MarketWatch, a financial media company, shared an article that said people should have twice their salary saved by age 35.

No one was convinced and took to the social media platform to share their annoyance over the far-fetched financial suggestion.

One person wrote: ‘I can’t be only one who reads this and thinks “Who are they TALKING to?” I didn’t have that much saved in my 30s. No one I knew had that much saved their 30s and most of us were solid middle class.’

‘Is this advice only for the rich? If so, maybe start w/ “95 per cent of Americans can ignore.”‘

And more people jumped on the roasting bandwagon with tweets that hilariously said that people in their mid 30s should have ‘debt twice your salary’ and by 35, ‘you should have collected all the Chaos Emeralds and have half the Infinity Gems in your grasp, say retirement experts’.

Parental financial advice: And another person asked in a tweet when their mom started writing articles 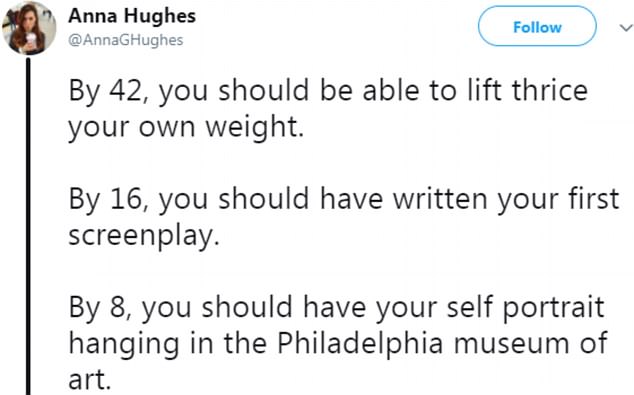 Impossible: Someone even tweeted a list of impossible tasks to go along with the outlet’s advice

And although the article may not have declared ‘being rich’ as the end all be all way to do well financially in your later years, it did provide some other tips in order to make sure your pockets aren’t suffering years from now.

Today’s 30 year olds (and the soon-to-be 30 year olds) are plagued with crippling student debt and on top of that, some millennials are skipping starter homes altogether for a bigger home and, as nice as that is, home prices are rising as are mortgage rates.

But fear not because even if you are no where this leave of financial stability, which clearly a lot of people aren’t, there is still time to hit the ground running and make plans to ensure you have enough money to retire in the Caribbean.