The actress, 93, was among the celebrities who came to pay homage to the Queen of Soul on Friday in Detroit.

Tyson, a pioneering actress during the segregation, was the picture of elegance in a black dress, which she accessorized with gloves and a pearl necklace — but it was her imposing hat that commanded the most attention. 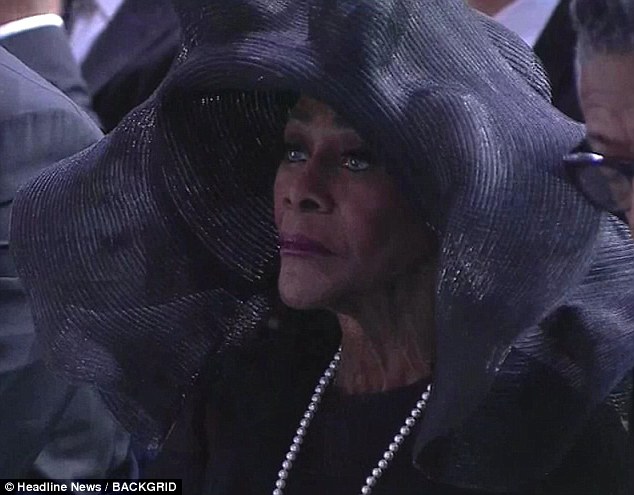 Service: The actress, 93, was among the celebrities who came to pay homage to the Queen of Soul in Detroit 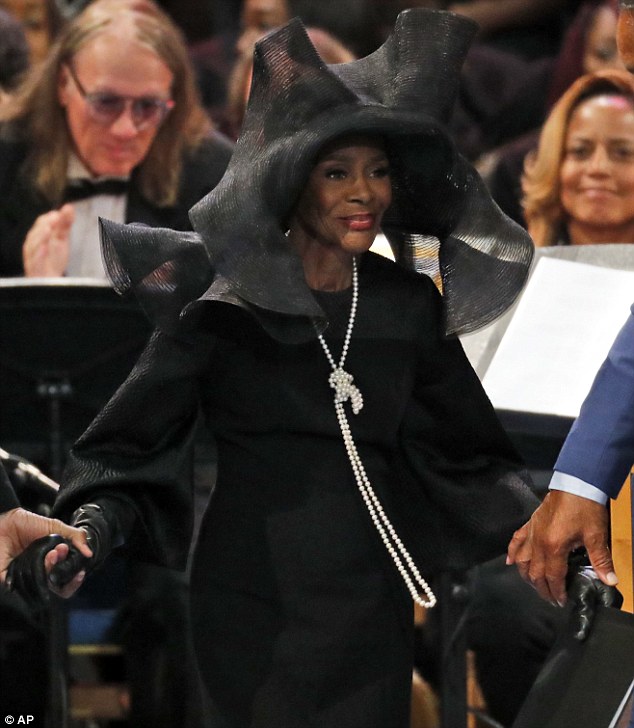 Emotional: Tyson got up to deliver a touching address in honor of the late singer

The large, black floppy hat cascaded all the way onto Tyson’s shoulders as she sat among the guests at the Greater Grace Temple.

Viewers took to Twitter to heap praise on the accessory, swooning over the actress’ audacious sense of style and her ability to pull off the eye-catching hat.

‘I’m going to be as extra as Cicely Tyson’s hat from now on!!!’ one person pledged.

Someone else gushed: ‘Cicely Tyson’s hat! I could only dream of being so regal.’

One person suggested in a humorous tweet that Tyson’s hat was so large it might have earned its own zip code.

‘Cicely Tyson’s hat has its own zip code and I’m absolutely here for it,’ the Twitter user wrote under the hashtag #ArethaHomegoing, which was used by viewers looking to comment on the emotional, star-studded ceremony. 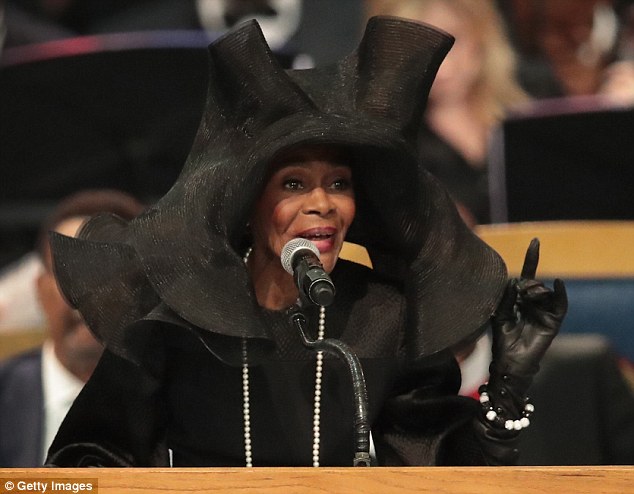 Touching: Tyson’s hat was in full view when she paid tribute to Franklin and her talent

Praise: Viewers of the funeral took to Twitter to heap praise on Tyson’s spectacular floppy hat

Theory: One person posited that the hat might have enabled Tyson to get some rest during the marathon service, which was scheduled to last at least five hours 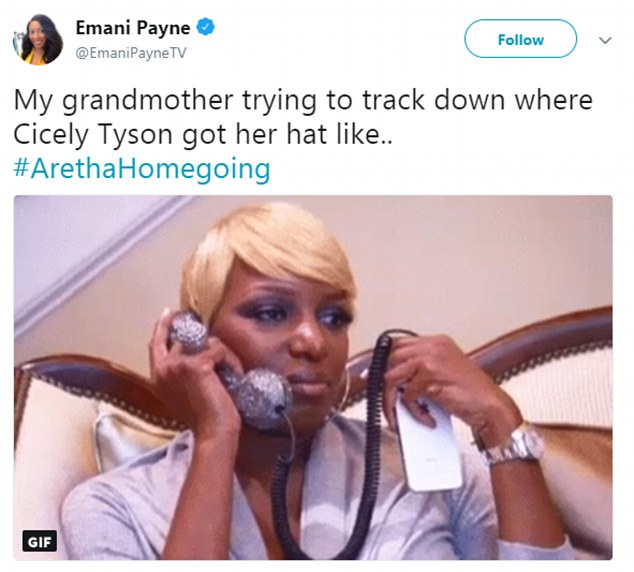 Family: Someone delighted in imagining their own grandmother trying to acquire the same hat

‘Aretha Franklin’s funeral is being held inside of Cicely Tyson’s hat,’ someone else joked, adding: ‘I love it!!!’

The hat took on an inspirational dimension for one Twitter user, who wrote: ‘May you proudly take up your space in the world, like Cicely Tyson’s hat.’

Another person delighted in picturing their own grandmother trying to track down a similar hat in order to imitate Tyson’s style.

One Twitter user posited that the large floppy hat might have served a secret purpose during the marathon service, which was scheduled to at least last five hours.

‘Cicely Tyson think she slick. She wore that hat so she could take catnaps as needed. I see you, great-auntie. Respect,’ that person wrote. 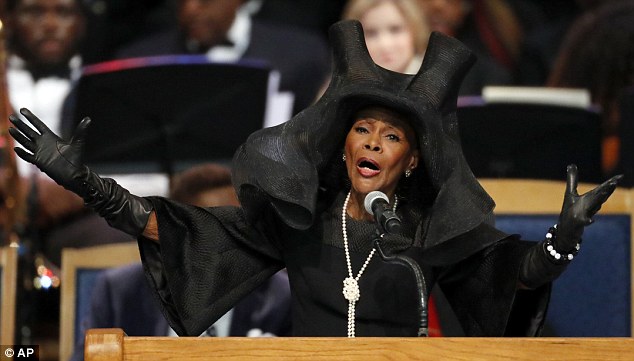 Regal: Tyson, a pioneering actress during the segregation, was the picture of elegance in a black dress, which she accessorized with gloves and a pearl necklace around her neck 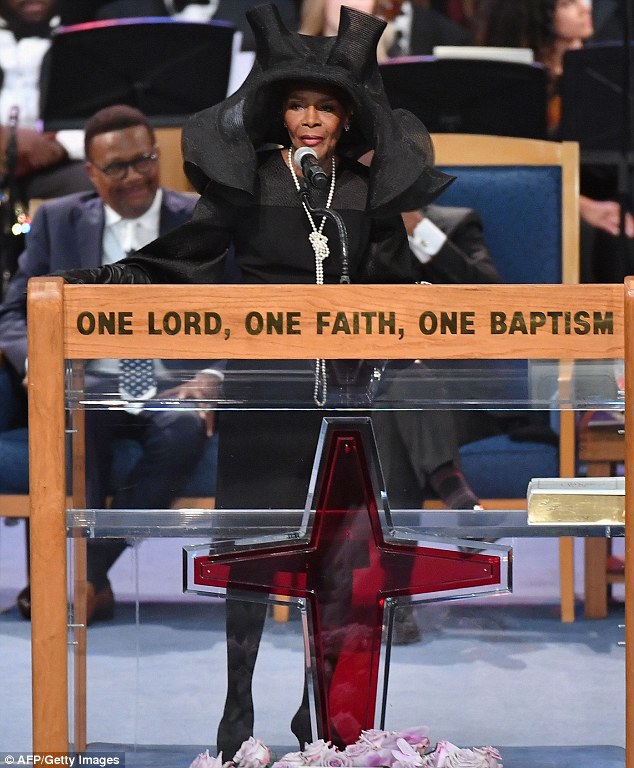 Another person raved: ‘I just want to stand under Cicely Tyson’s hat. I’m convinced that it will protect us from the harms of this unholy universe.’

Someone found the hat so regal they thought it deserved a social media presence of its own.

Tyson’s hat was in full view when she got up to deliver an animated address in honor of Franklin.

‘God knows we have been blessed,’ she told the crowd. ‘I thought I would start by saying “Good day”, but I don’t think that is necessary. We all know what a great day this has been and how blessed we are to be here on this day.

‘I want to offer my condolences to the family. What a triumphant gift you have given the world that they have been able to experience, no matter how, this moment in time with us.’

She added: ‘[Aretha] spoke to us through her soul and everything she experienced. And that’s why, no matter what she was singing, she moved every single person.’