Two women have been killed in a crash in Perth’s south, with the driver of the other car involved arrested after failing to stop.

Police say the driver, a man in his 50s, did not offer assistance after his four-wheel drive collided with a smaller car as it was turning right in Coolongup on Friday night.

The 27-year-old driver of the other car died in hospital and her passenger, also aged 27, died at the scene.

The man was arrested shortly afterwards and taken to Royal Perth Hospital where he is assisting police with their inquiries.

A male passenger in the four-wheel drive, who was not believed to be injured, fled the scene and is being urged to come forward.

Perth man Sunil Kumar witnessed the horror close up after the 4WD missed his car by a split second.

He told Nine News he looked in his rear view mirror before the crash and saw both young women laughing and smiling together.

After the horror collision Mr Kumar jumped out of his car in a bid to save the women.

‘Then I went there (to the car) and seen that it was really serious,’ he said.

Anyone who witnessed the crash or who has dashcam footage is also being asked to contact police.

A motorcyclist aged in his 30s also died on Friday night in what’s believed to have been a single-vehicle crash in Quinns Rock, north of Perth. 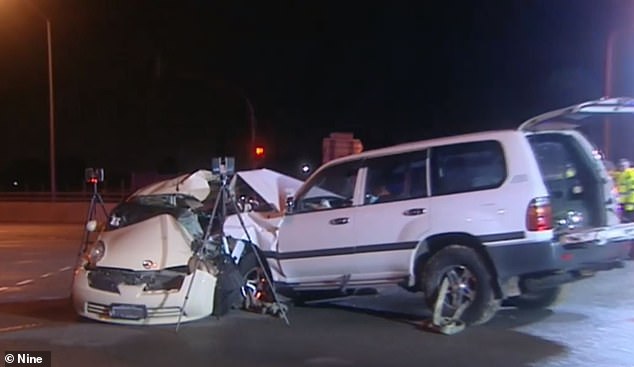 Police said the two men in the 4WD (pictured) fled the scene without attempting to render assistance, the driver, in his 50s, was found in a nearby McDonald’s and the other on the run