Sgt. Ty Able Bravo Company, 1st Battalion, 75th Ranger Regiment, pictured, was one of two Army Rangers who ended up using a pioneering medical technique to carry out a blood transfusion while on the battlefield

A group of Army Rangers that were engaged in a firefight in Afghanistan ended up donating blood to a fellow soldier after one of their comrades became severely wounded during a battle.

The on-the-spot blood transfusion was carried out last summer and saw three other soldiers who were on the field give blood in a process that took less than ten minutes.

After donating their blood, the soldiers then got back up and carried on fighting the enemy.

The Rangers used a technique known as the Rangers O Low Titre Program or ROLO which allows soldiers to donate blood to their wounded comrades on the battlefield in a matter of minutes.

In this particular instance, the Rangers were part of an assault force coming under fire in Wardak province during a nighttime raid.

Three Rangers were wounded in a blast while another was pulled out of the line of fire and hidden behind meter-high lump of earth. 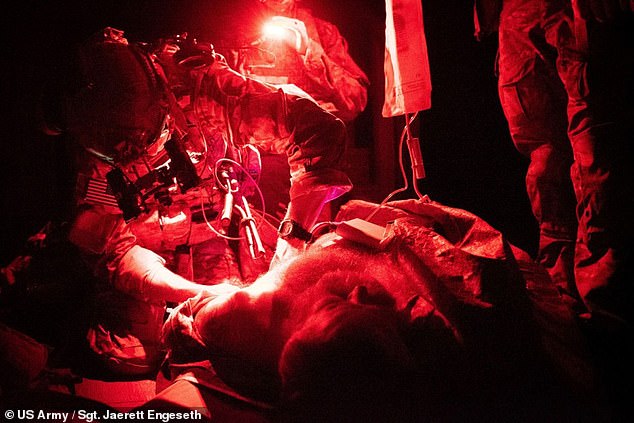 Bowen found saw that the soldier he was treating had a gaping hole on the right side of his chest.

While that was going on, another Ranger made his way over to Bowen with blood pouring out of his neck.

Bowen attempted to stop the bleeding and applied pressure to the soldier’s neck wound and made an incision in his neck to create an airwayto help him breathe. 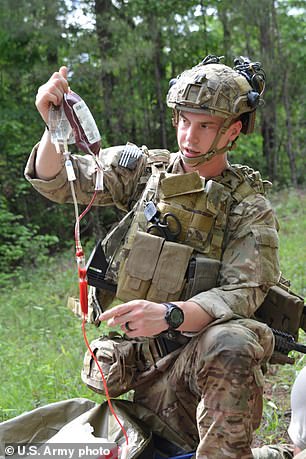 After getting back to the soldier with the chest wound who was bleeding out, Bowen found that they had run out of blood packs having used them all up.

Bowen and Able then used the ROLO technique and drew fresh blood from pre-screened donor volunteers, all while coming under enemy fire.

The two medics ended up shielding their patients with their own bodies as they drew blood.

‘As all of the treatments and movements while under enemy fire were occurring, danger close fire missions with hellfire missiles, 30mm rounds, and 105mm rounds were being executed as close as 30 meters from our position,’ Bowen said in an Army press release.  ‘As this was happening, Sgt. Able and I did our best to shield our casualties from harm and covered their ears during impact of the large munitions.’

The entire procedure took place while the soldiers were being subjected to machine gun and mortar fire.

Thanks to their quick-thinking and cutting edge medical training Bowen and Able were able to save the lives of six of their fellow men on the night of the raid.

Lt. Col. Ryan Knight, M.D., 75th Ranger Regiment Command Surgeon, said that ‘every link in the system worked that night’ to save lives.

‘To provide this level of care, Bowen and Able, had to ignore their own survival instincts and concentrate on their patients. They displayed the highest levels of courage as they repeatedly placed their patients’ survival above their own safety,’ Knight continued.

‘They will say they were just doing what they are trained to do, and in some ways they are right.

‘While this is an amazing display of personal courage, medical expertise, and the most incredible saves I’ve ever heard of, it’s also Rangers living the Ranger Creed and is what we expect every day from the 75th Ranger Regiment.’

‘His disregard for his own safety while performing life-saving care is exemplary and serves as an example for all Rangers to follow.’