New York police have arrested two men who they say attacked multiple workers in a Manhattan Trader Joe’s after they were told to wear masks in the store.

John Carrero and Alejandro Escobar, both 34, refused to leave the Trader Joe’s on East 32nd Street on July 14, after entering the grocery store at around 8.50pm.

Several employees told authorities that they asked the duo to leave the store after they refused to wear masks, a NYPD spokeswoman said in a statement to DailyMail.com.

Police claim that the pair started their assault by pulling one of the employee’s mask off their face. 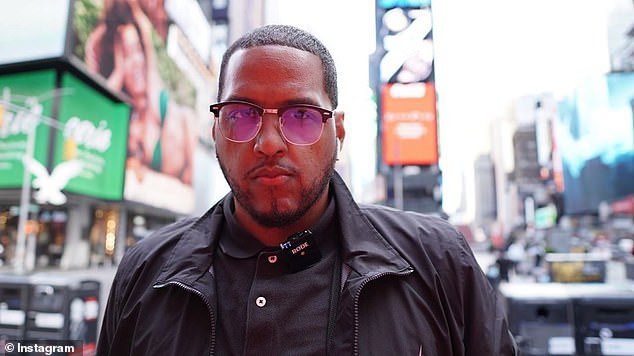 Alejandro Escobar (pictured), 34, and John Carrero were both given a number of charges and are expected to appear in court on October 13

Carrero is then alleged to have hit a 22-year-old female employee in the head with a wooden paddle used by checkout staff.

Another member of staff had their hair pulled.

Escobar is also said to have threatened to return to the store with a firearm, which police said caused ‘fear and alarm to employees and customers inside of the store.’

Eight members of Trader Joe’s staff were injured in the attack, and one was taken to hospital.

As the two left the store, Escobar allegedly used a chair to strike the store window in a bid to regain entry.

Escobar, from the Bronx, was also charged with menacing. Both have since been released and are due in court on October 13.

On his Twitter page, video blogger Escobar said that he had a video of the altercation but added that police currently had the footage.

He also claimed that the accounts of them attacking workers were not true, declaring that the video would show that naysayers would ‘look as stupid as Trader Joe’s is gonna look.’

Kenya Friend-Daniel, a spokeswoman for Trader Joe’s, said that eight employees ‘suffered some sort of injury.’ One employee had to be treated at the hospital, NBC News reports.

‘All the crew members are doing OK, and they’re all back at work,’ Friend-Daniel said on Tuesday.

All employees at the store have been given the opportunity to transfer to another location or receive paid time off.

‘They all said that they wanted to continue to work and were fine,’ she added.

A security guard has since been hired at the store.

‘We are extremely grateful that everyone is OK and they’re back at work and it isn’t worse,’ Friend-Daniel said.

Friend-Daniel said the company did not believe the incident was triggered by a request to wear a mask, adding: ‘We feel there was a different motivation behind it, such as wanting to start some trouble.’ 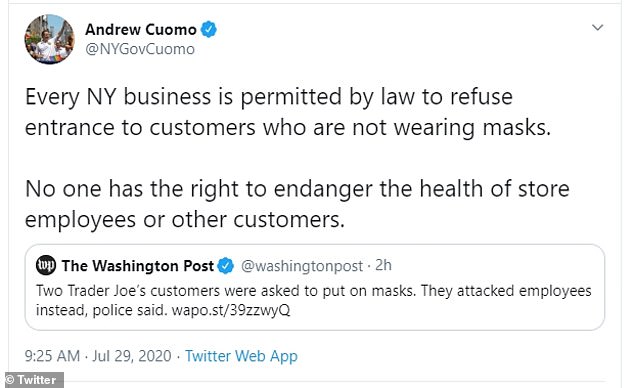 Gov. Andrew Cuomo took to his own Twitter to slam the incident and said every NY business is permitted to refuse entrance to customers not wearing masks

Escobar has also shared video in support of Stella Immanuel, the controversial doctor who has championed hydroxychloroquine as a treatment for coronavirus.

Gov. Andrew Cuomo took to his own Twitter to slam the incident.

‘Every NY business is permitted by law to refuse entrance to customers who are not wearing masks,; he declared.

‘No one has the right to endanger the health of store employees or other customers.’