Two bears have been rescued from an illegal ‘bile farm’ in Vietnam where they have lived for an estimated 17 years in total darkness.

The Asiatic bears – a male named Xuan and a female named Mo – only got to see artificial light when they were undergoing excruciating bile extraction procedures.

Xuan had been kept in a small cage in the basement of a clothes shop in Son La, northern Vietnam, since 2004 – when he was just a cub. It is not known exactly how long Mo was kept with him.

Workers from animal charity Four Paws carried out the rescue, and say they were appalled by the conditions which are among the worst they have ever seen. 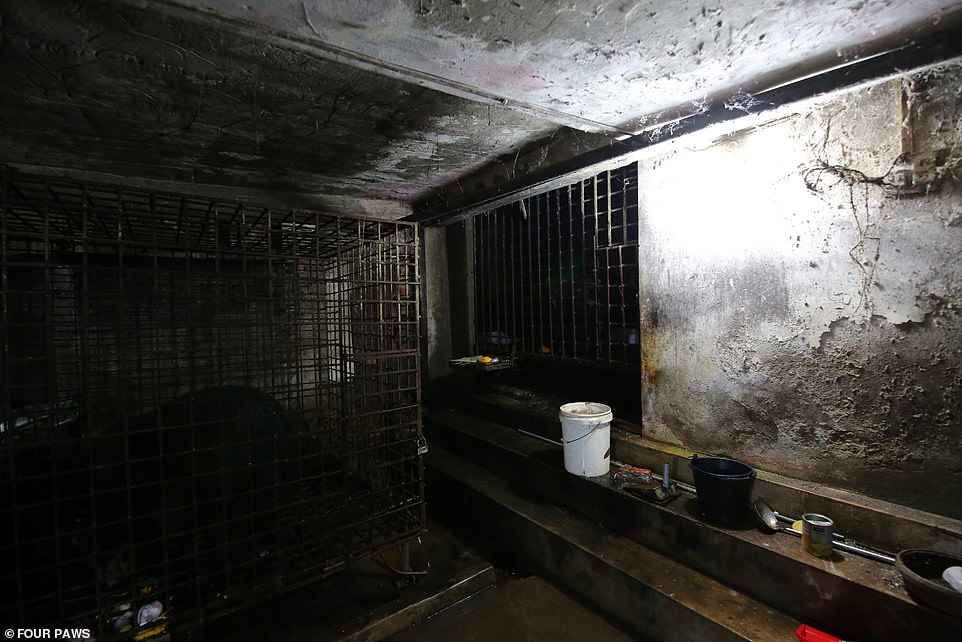 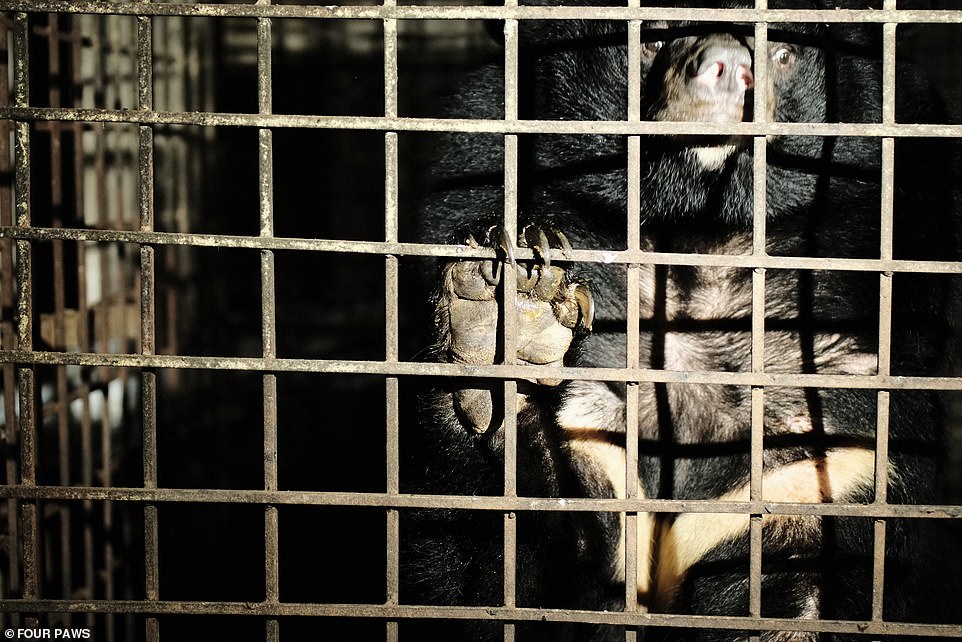 The bears’ cages were rusty and dirty, rescuers said, they had no easy access to fresh air, and there was barely any ventilation in the basement.

Left alone in the darkness for hours on end, they had no stimulation and were fed only a diet of rotten vegetables to keep them alive.

Staff from Four Paws sedated the pair so they could be removed from the cages, before carrying out medical examinations.

They found both were suffering from gallbladder disease as a result of being repeatedly stabbed in the organ with probes designed to extract their bile.

Xuan is also overweight, has liver disease, and has lost multiple teeth.

Captive bears often loose teeth as a result of chewing the bars of their cages in a vain attempt to escape.

Szilvia Kalogeropoulu, the vet who examined the bears, said both now face a long road to recovery.

After being examined, the pair were loaded on to a truck so they could be transported to a sanctuary in Ninh Binh – a nine hour drive away. 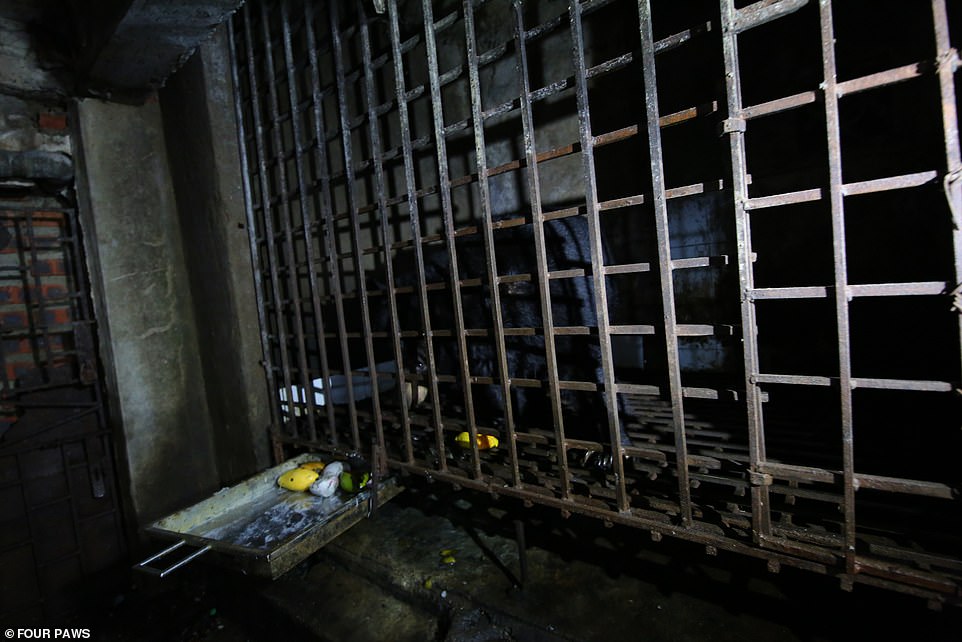 Animal workers say the bears only ever saw artificial light during their confinement, and that was only while being fed (tray of rotten vegetables, pictured) or suffering a bile extraction 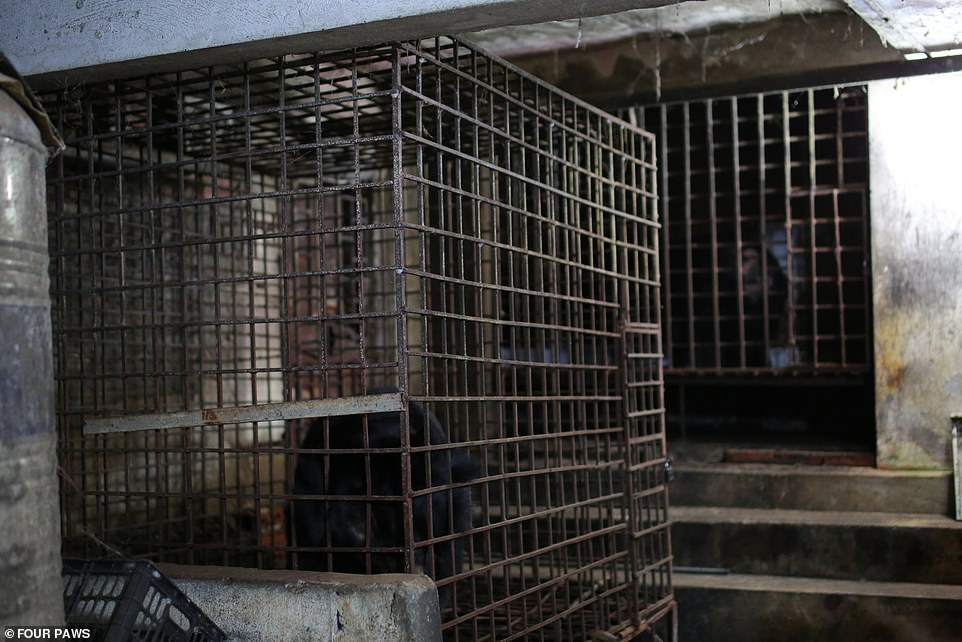 It is thought that Xuan had been kept in the cage at the rear of the basement since 2004, when he was a cub. It is unclear when Mo was brought to join him 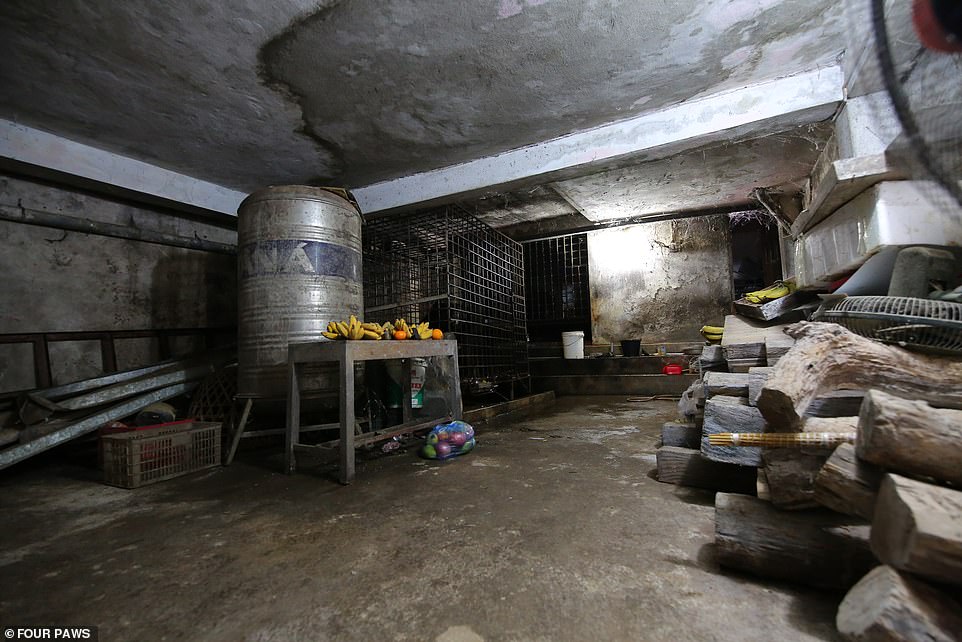 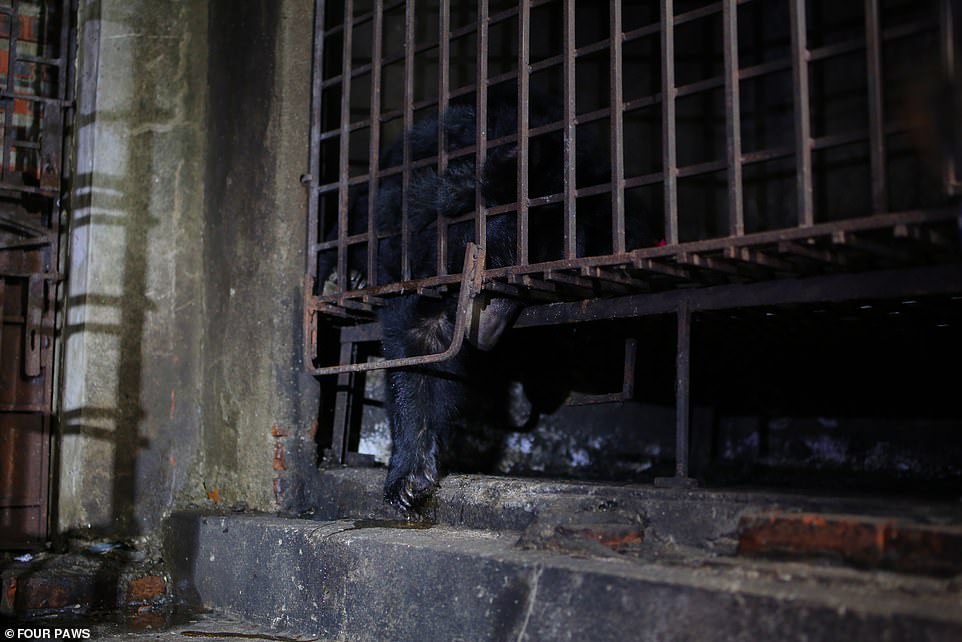 Bile extraction involves sharp probes being inserted into the bears’ gallbladders to drain out bile, often several times a week

The facility is both a home for bears rescued from the bile trade, but also an awareness and education centre for wildlife conservation in Vietnam.

Some of the 40 Asiatic black bears already living in the bear sanctuary were not only victims of bile farming prior to their rescue, but also of illegal wildlife trafficking.

Bear bile is a prized ingredient used in traditional Asian medicine. The fluid is extracted from the gallbladder, and used to be collected by hunters after a kill.

But in the 1980s, farmers began to extract bile from live bears which were often kept in tiny ‘crush cages’ or fitted with metal vests similar to a straight-jacket.

Methods of bile extraction include repeatedly puncturing the gallbladder with probes, fitting permanent catheters, or creating a permanent hole or ‘fistula’ from which the bile can be drained.

The procedures can be extremely painful if performed without anesthetic, and can cause prolonged suffering or infection if the catheters or fistulas are not tended to.

The practice has been illegal in Vietnam since 1992, but continues to be legal in China – with bear bile even recommended as a cure for Covid early in the pandemic.

It is thought there are around 10,000 bears being kept on farms in China, and around 1,000 caught up in illegal operations in Vietnam.

A synthetic form of the acid has been widely available for decades, but demand for the ‘natural’ version persists. 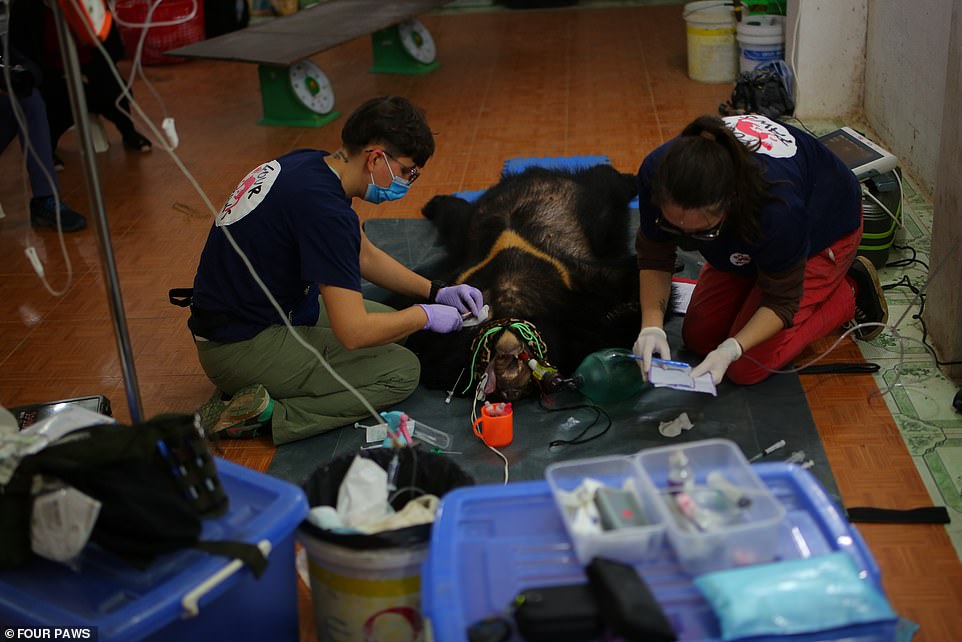 Vets who examined the bears said they were both suffering gallbladder disease due to the organ being repeatedly drained, and were overweight 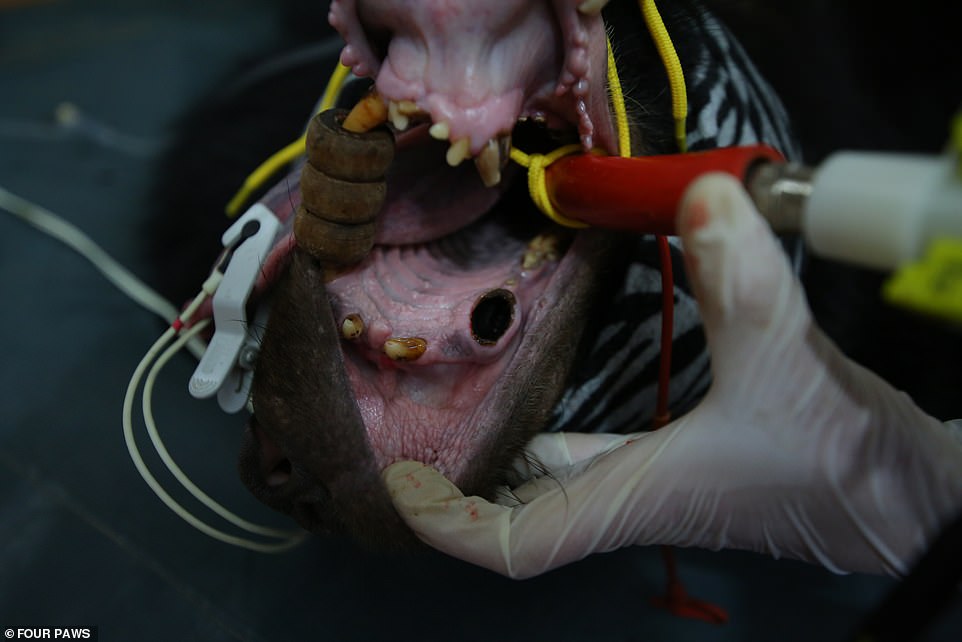 Xuan also had a lot of damage to his teeth. Caged bears typically damage their teeth chewing the bars in an attempt to escape 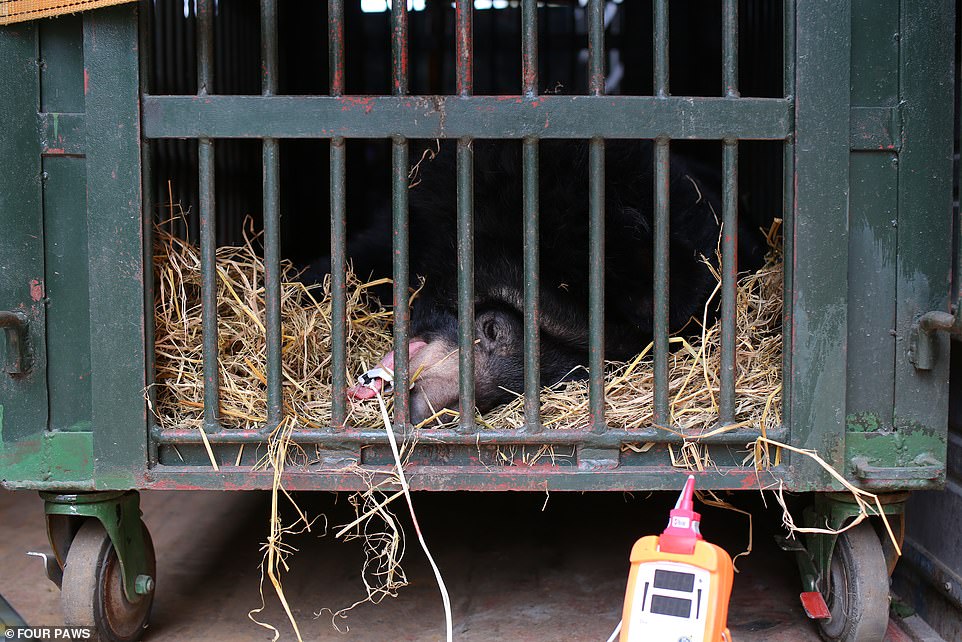 The pair have now been taken to a sanctuary in Ninh Binh, where vets say they face ‘a long road to recovery’