Two British charity workers have been captured by Russian forces after going to Ukraine as humanitarian relief volunteers, it was reported today.

The non-profit Presidium Network said the two men had been detained by Russian troops at a check point south of Zaporizhzhia in southern Ukraine on Monday.

‘Two men who were working as civilian humanitarian relief volunteers were captured on Monday at a checkpoint south of the city of Zaporizhzhia,’ the charity said in a statement to the BBC on Friday.

‘The foreign office is doing all it can to support and identify these two people,’ British trade minister Anne-Marie Trevelyan told Sky News.

There was no immediate comment from the British foreign ministry, but it was understood that it was urgently seeking more information. The MailOnline has contacted Presidium Network and the foreign office for further information.

Zaporizhzhia is a crucial way station for tens of thousands of Ukrainians fleeing Mariupol, the besieged city to the south east which has been largely captured by Russian forces and all-but razed to the ground.

News of the capture of the charity workers comes a day after a British father was killed in Ukraine, and a second Briton remains missing, after the pair apparently joined local forces fighting Russia.

Scott Sibley, a 36-year-old veteran of the British armed forces who served in the Commando Logistic Support Squadron in Afghanistan, has been named as the first UK casualty in Ukraine.

Their capture was announced by the UK non-profit organisation Presidium Network, which say they were seized at a checkpoint on Monday south of the city of Zaporizhzhia, in south-eastern Ukraine. Pictured: A destroyed residential area in Zaporizhzhia, April 28

Meanwhile, Kyiv said Friday that plans were in place to evacuate civilians from the besieged Azovstal steel plant in Mariupol where Ukrainian forces and civilians are encircled by Russian troops.

‘An operation to evacuate civilians from the Azovstal factory is planned for today,’ the Ukrainian presidency said in a statement.

Russia last week said it had gained full control of the strategic port city, except for the huge Azovstal industrial area.

President Vladimir Putin ordered a blockade of the steelworks, where hundreds of civilians are sheltering with Ukrainian troops, according to Kyiv, including those requiring medical attention.

UN Secretary-General Antonio Guterres said this week that the United Nations was doing everything possible to ensure the evacuation of civilians from the ‘apocalypse’ in Mariupol.

A UN representative to Ukraine said during the visit she was travelling to Zaporizhzhia to prepare for a ‘hopeful’ evacuation.

‘The UN is fully mobilised to help save Ukrainian lives and to assist those in need,’ UN in Ukraine Resident Coordinator and Humanitarian Coordinator Osnat Lubrani said.

Thursday also saw Russian sources publish a list of what they claim are 100 British ‘mercenaries’ fighting in Ukraine, including the name of one woman.

A pro-war Telegram channel called Rybar with almost 400,000 subscribers claimed the 100 British citizens whose names were published were part of the ‘International Legion of Territorial Defence of Ukraine’, also known as the Ukrainian Foreign Legion.

The list does not include the name of Scott Sibley or two other British men who have been captured, and it is unclear how authentic it is.

The UK’s Foreign Office confirmed British national Sibley had been killed in Ukraine and the whereabouts of a second Briton is unknown.

It is thought that the two men had been fighting against Russian fighters after joining Ukrainian soldiers as volunteers, but this remains unconfirmed.

Friends of Sibley, fondly nicknamed Sibs, have paid tribute to the veteran, who is believed to have died on 23 April, and set up a GoFundMe page to raise money for his funeral. 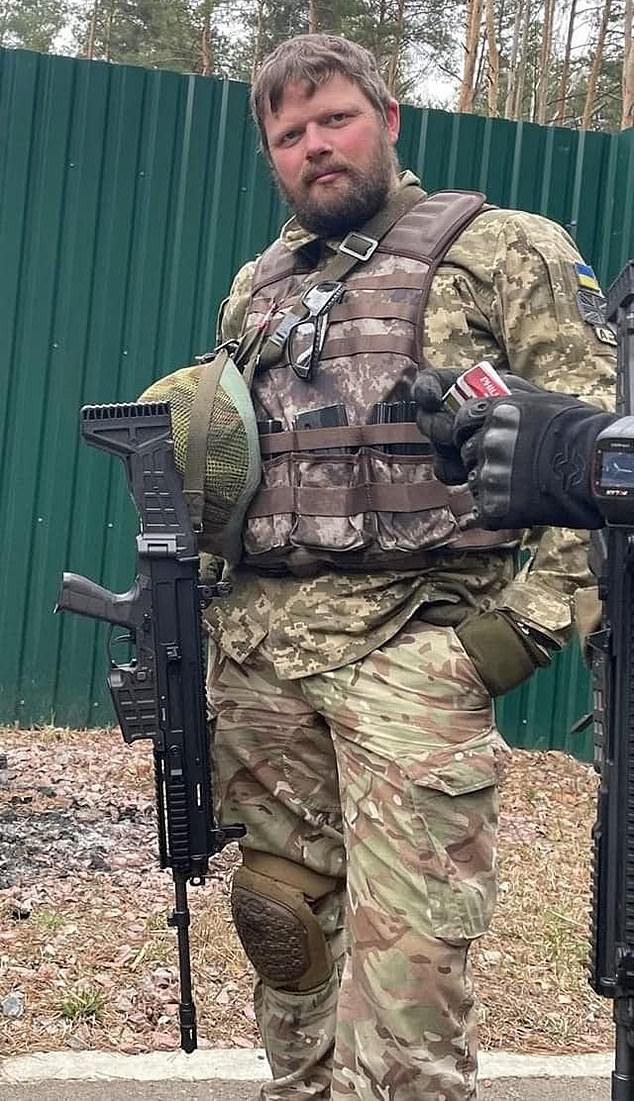 Scott Sibley, a veteran of the British armed forces, was named yesterday as the first Briton to have died fighting in Ukraine

‘Scott was a son, father, brother and uncle,’ his friend Craig wrote on the page. ‘To me he was a friend like no other and the bravest person I’ve had the pleasure to have known, he was as good as a brother to me.

‘His life may have been cut short but he lived to the full and did things the Sibs way, right until the end.’

Another fundraising page set up for Sibley’s relatives described his ‘infectious laugh’, adding: ‘We all have memories with him and he has helped us in different ways.’

Sibley leaves behind his daughter who was diagnosed with stage 4 high risk Neuroblastoma, a rare form of cancer that mostly affects young children.

Following her diagnosis in 2018, Sibley shaved his head so that his daughter would not feel different when she lost her hair, reported the BBC.

Sibley’s former squadron, the Army’s Logistic Support Squadron, paid tribute to the veteran, writing: ‘This week the Sqn has lost a former serving soldier. A man that showed Commando spirit until the end. RIP. Scott Sibley.’

A former comrade, Alex Darwin, paid tribute to his friend. ‘Sib, I’m in complete disbelief. What a pleasure to have served alongside you, to know you and to have experienced your kind nature.

‘You were there for me and I will forever be grateful. One hell of a beautiful guy, inside and out.’