Two British climbers have cheated death after one lost consciousness and fell down a crevasse on a French mountain.

Matthew Tomlinson, 38, and Daniel Acquah, 54, both from London, were in the final stages of a four-day climb up the infamous Peuterey Integral on Mont Blanc when a storm blew in.

French gendarmes who carried out the rescue mission on Tuesday said the experienced climbers were ‘incredibly lucky’ and only survived because the ‘terrifying’ winds stopped for an hour.

Rescuers were ‘minutes away’ from telling Matthew – who was uninjured – to cut his rope and leave his friend Daniel behind due to the worsening weather conditions.

Matthew Tomlinson, 38, (pictured) and Daniel Acquah, 54, both from London, were in the final stages of a four-day climb up the infamous Peuterey Integral on Mont Blanc when things started to go wrong

Matthew told The Daily Telegraph how drama struck on the last day at 15,680ft, when they were only 650ft from the summit.

‘We had stopped to navigate. I was at the very pinnacle of the ridge on the GPS app of my phone as it was hard to see where to go given the terrible wind and fog.

‘All of a sudden Dan just stopped making sense and keeled over backwards. I just managed to get my ice axe over the ridge line, dug it hard into the ice, and kept hold of my phone.

‘You never know whether you will stay where you are or follow him down. He fell around 20 to 25 metres. He flailed and tumbled and then hit the crevasse.’

Daniel finally found the strength to climb out of the hole and towards Matthew who was still on the ridge. 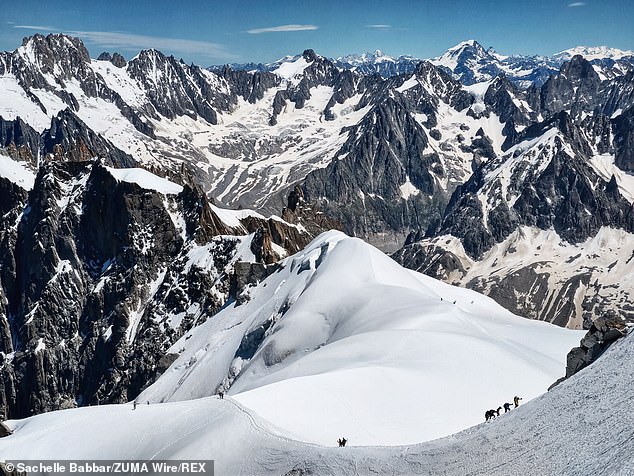 Rescuers were ‘minutes away’ from telling the Matthew – who was uninjured – to cut his rope and leave his friend Daniel due to the worsening weather conditions. Pictured is a view of Mont Blanc near Chamonix where the accident happened

However, when he got there he passed out due to the concussion and altitude sickness.

Daniel had had an earlier scare in a less serious fall when some ice collapsed but, apparently unharmed, he was able to continue the climb.

With his friend unable to move, Matthew phoned the mountain rescue gendarme unit, PGHM, in Chamonix.

Helicopters could not be used for the rescue due to the bad weather so four gendarmes had to scale the summit from the other side to reach the men.

They arrived at 6pm and gave Daniel oxygen and steroids to bring him round.

Stéphane Bozon, the PGHM commander said: ‘A storm was due an hour later, so we had to leave. If the injured man had not been able to walk, we would have left him.

‘This man was saved from almost certain death given the conditions. We had even envisaged the possibility of asking his roped companion to leave him because we weren’t sure we could get there in time.’