Police in Utah have arrested two Salt Lake City man who they say raped an unconscious 14-year-old girl in the backseat of a car while a third man recorded it on a cellphone because he thought ‘it was funny.’

Richard Djassera, 21, and his brother Leclair Dodjim 24, were arrested on Tuesday on a half-dozen charges each, including rape, forcible sodomy and aggravated sexual assault. As of Friday morning, a third suspect in the case remained at large.

West Jordan Police Sgt. Joe Monson says the victim connected with Dodjim through Snapchat and agreed to meet up with him and two others on the night of September 8 to go drinking. 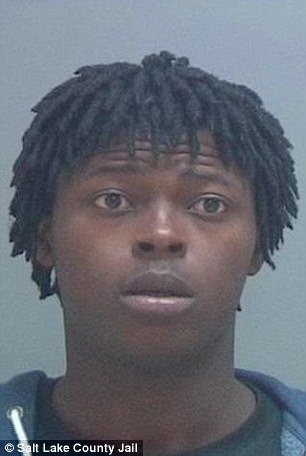 Leclair Dodjim, 24 (left), and his 21-year-old brother, Richard Djassera (right), of Salt Lake City, have been charged with raping a passed-out 14-year-old girl in the backseat of a car

Dodjim, who goes by the nickname ‘LA’, had reportedly lied to the girl about his age, falsely claiming he was 17 reported Deseret News.

According to a probable cause statement obtained by Fox 13, police in West Jordan were contacted on September 9 by the teenage girl’s father who reported a sexual assault.

The man told police his daughter had spent the previous night at a friend’s house and agreed to meet up with three men, one of whom she had connected with over Snapchat.

When interviewed by police, the victim said the trio took her to a gas station to buy alcohol, then to a mall parking lot, a hookah bar and a house party.

According to the 14-year-old, the last thing she could remember was being in the backseat of a car, with a man kissing her and her telling the man to stop.

Investigators later obtained a video recording purportedly showing the 14-year-old girl appearing unresponsive, with her head hanging out the car window, and two men apparently performing sex acts on her.

According to the statement, the girl in the video does make ‘feeble attempts’ to push off a man lying on top of her, but she appears passed out throughout most of the video and ‘ clearly cannot give consent to anything that is happening to her.’

The probable cause statement indicates that Dodjim was one of the two men seen in the cellphone recording lying on top of the passed-out teenager. 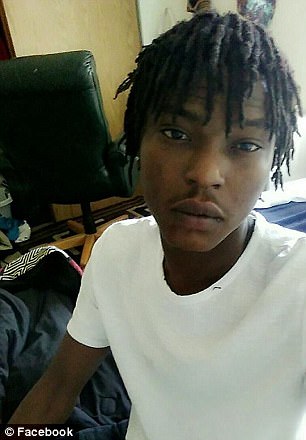 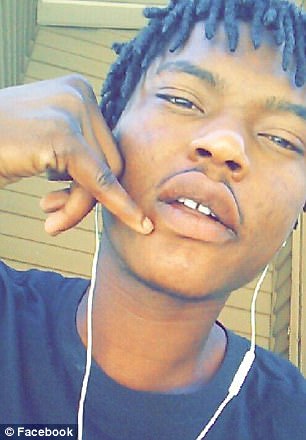 Police say the victim connected with Dodjim (pictured left and right) through Snapchat, where the 24-year-old man was pretending to be 17 years old

When questioned by police, the 6-foot-tall, 140-pound Dodjim admitted to have taken the underage girl out drinking, but denied performing sex acts on her, claiming he was ‘too drunk’ and that he just laid on top of her.

Dodjim said it was a man named ‘Nash’ who had sex with the unconscious high-schooler in the backseat. He also identified the person recording the assault as his brother, 21-year-old Richard Mbaye Djassera. 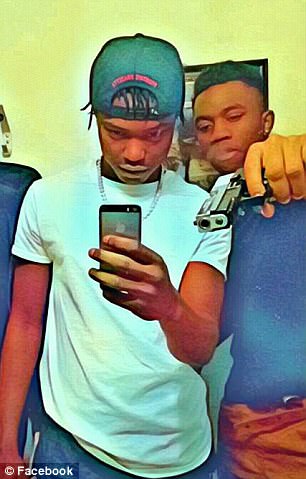 Dodjim (pictured left next to a man holding a gun) denied performing sex acts on the teen, claiming he was ‘too drunk’

Djassera was interviewed by police and said that when he saw his brother and ‘Nash’ have sex with the 14-year-old, he decided to capture it on his phone because ‘he thought it was funny,’ the statement read.

Both siblings were arrested on Tuesday and booked into the Salt Lake County Jail on charges of aggravated kidnaping, rape, forcible sodomy, sexual exploitation of a minor, contributing to the delinquency of minor and aggravated sexual assault.

Djassera’s arrest record, dating back to 2014, includes more than a half-dozen past charges, most of them related to minor traffic violations.

In November 2015, Djassera was picked up by police on suspicion of unlawfully providing shelter to a runaway and interference with arresting officers.

Djassera and Dodjim’s next-door neighbor said the family were believed to have come to the US as refugees.

According to inmate information available on Salt Lake County Jail’s website, Djassera was a native of ‘West Africa,’ while his older brother’s country of birth was listed as South Africa.

Police are still investigating the third suspect in the rape case, known only as ‘Nash.’