A Capitol police officer has died and another is injured after being mowed down by a knife-wielding suspect who drove his car through a barrier then emerged with a knife before being shot dead on Friday.

At 1.02pm, the driver plowed his blue Nissan Altima through the barrier at Constitution Avenue, smashing the two cops, before emerging from with a knife. He then lunged at other cops nearby, ignoring commands, and was shot dead. The two Capitol cops were taken from the scene to different hospitals but one has now died.

No information has been released about the identities of the cops or the suspect. Capitol Police said they do not think the incident was terror related but that the investigation is ongoing.

Fencing that had been in place around the Capitol since the January 6 riot was taken down just last week.

‘It is with a very very heavy heart that I announce one of our officers has succumb to his injuries,’ Acting Capitol Police Chief Yogananda Pittman said at a press conference on Friday, adding that it had been a ‘tough’ year for the force.

Armed National Guardsmen were deployed immediately and have been seen patrolling the halls of government buildings but police say there is no outstanding threat.

The suspect – who NBC is reporting is now dead – is shown being stretchered away from the scene after being shot by a Capitol cop. Two Capitol cops are now in the hospital in a critical condition 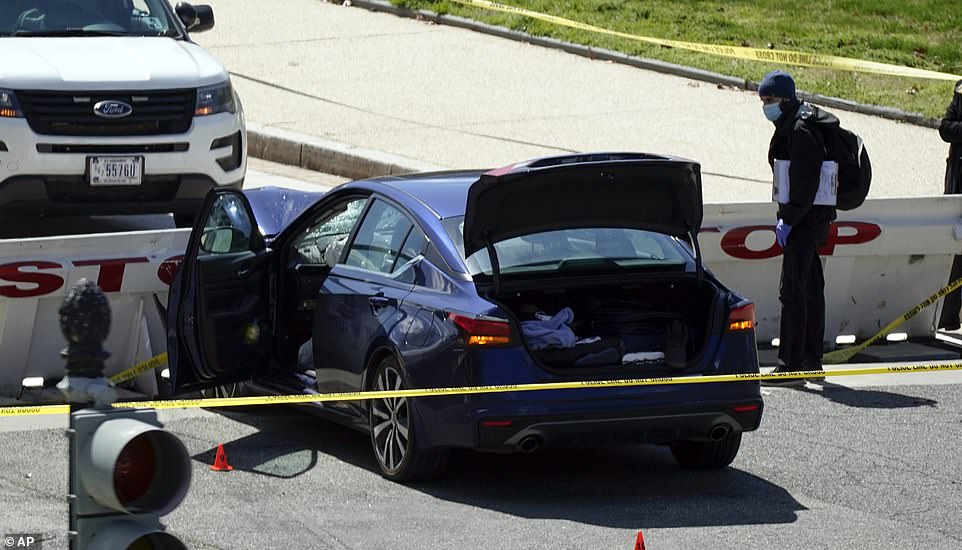 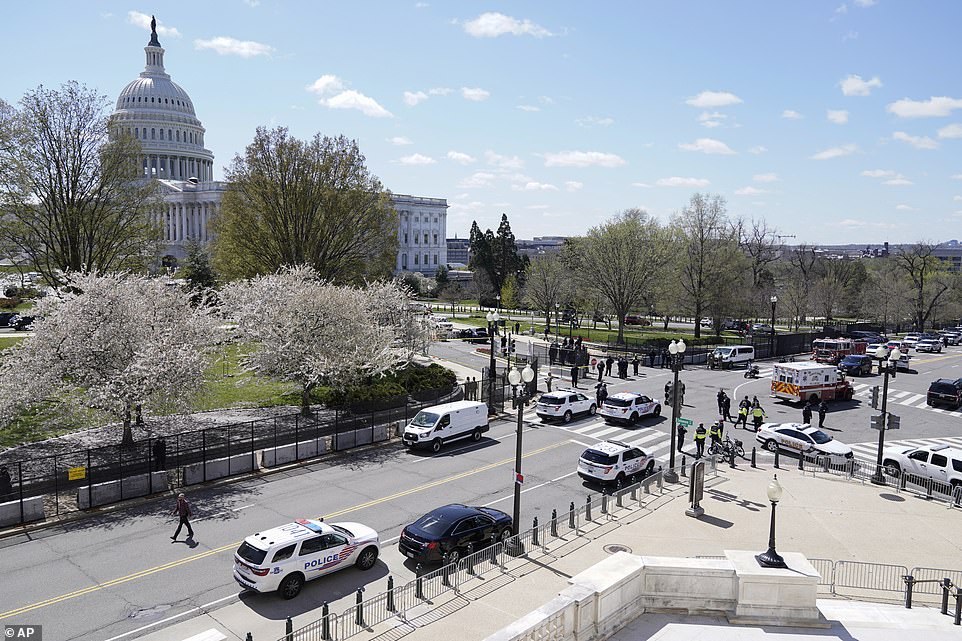 Police officers surround the scene after a car that crashed into a barrier on Capitol Hill on the Senate side of the U.S. Capitol in Washington, Friday, April 2, 2021 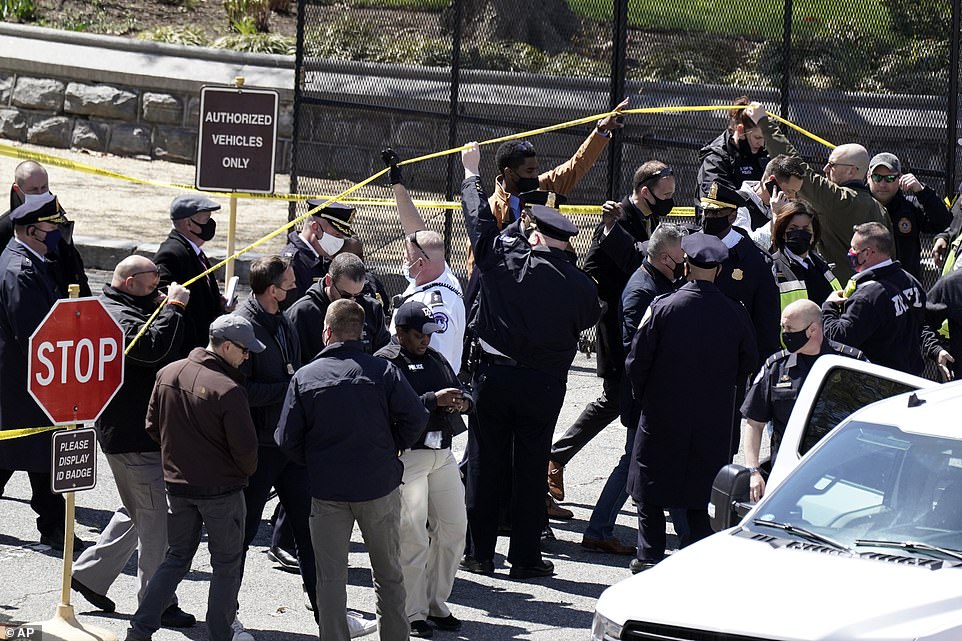 Police officers gather near a car that crashed into a barrier on Capitol Hill in Washington, Friday, April 2, 2021 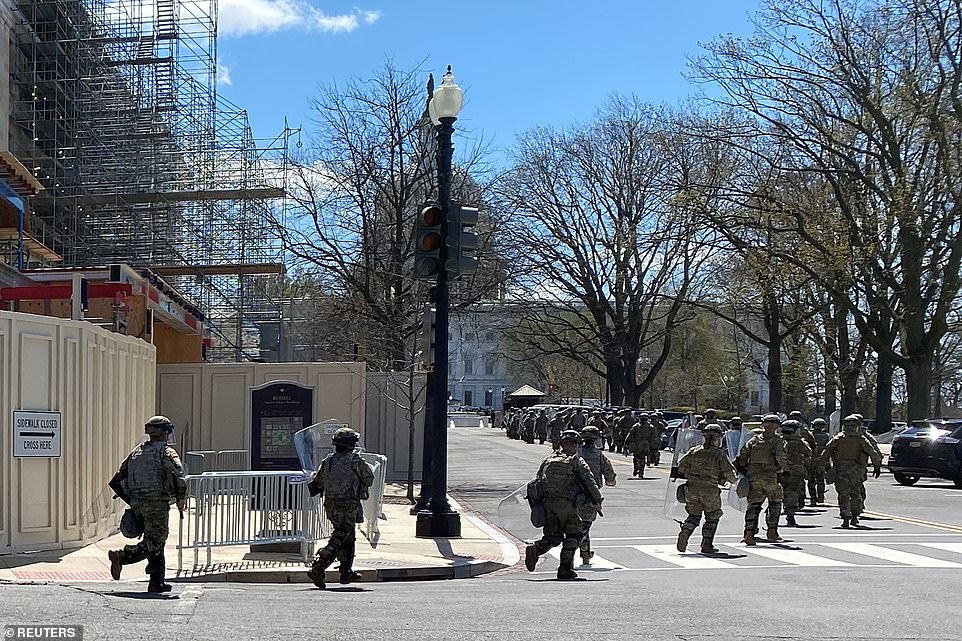 ‘It is with a heavy heart that I come here to shed some light on the incident that occurred at the US Capitol.

‘At approximately 1.02 this afternoon, a suspect entered what we refer to as the north barricade of the Capitol.

‘He did not respond to verbal commands, he started lunging towards officers, at which time USC officers fired upon the suspect. At this time, the suspect has been pronounced deceased.

‘Two US Capitol Police Officers were transported to different hospitals. It is with a very very heavy heart that I announce one of our officers has succumb to his injuries,’ she said.

She did not reveal whether or not the suspect said anything while carrying out the attack, but said he was not known to the police. 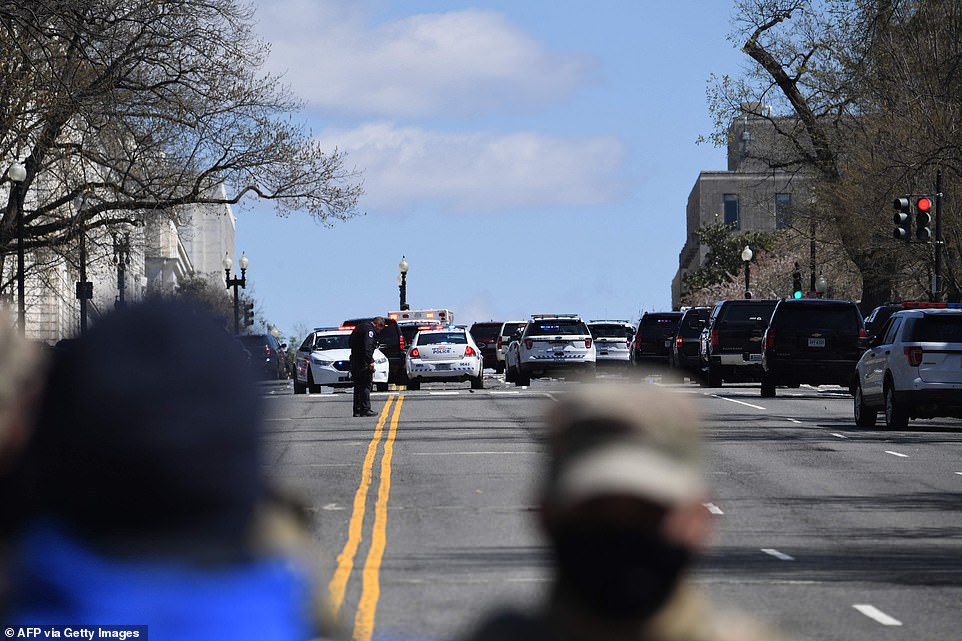 Police block a street near the US Capitol on April 2, 2021, after a vehicle drove into US Capitol police officers in Washington, DC 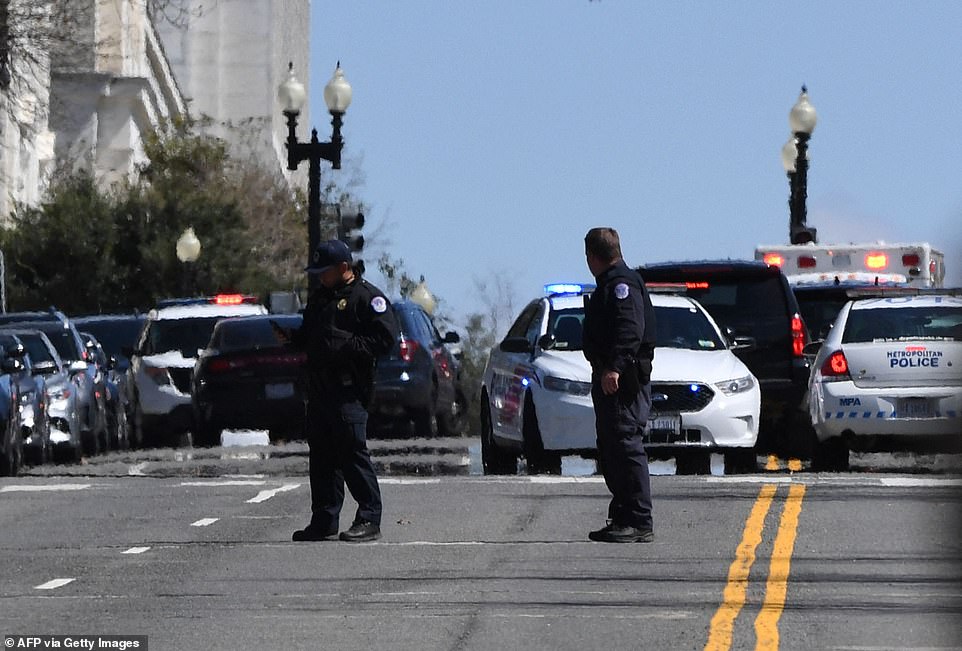 Police block a street near the US Capitol on April 2, 2021, after a vehicle drove into US Capitol police officers in Washington, DC

Neither the House or Senate is in session this week so lawmakers are back in their home states instead of being in the Capitol building.

The White House did not appear to have an immediate change in security posture in response to the situation at the Capitol. President Joe Biden had left to spend Easter at Camp David shortly before the incident occurred.

White House press secretary Jen Psaki said there is a member of the national security team, an acting chief of staff and a member of the press team traveling with him, as is standard operating procedure.