The cases have been traced back to a Walmart in suburban Johnsburg and the Warren Barr South Loop nursing home in Chicago, the Illinois Department of Public Health (IDPH) said on Friday.

Legionnaires’ is a severe form of pneumonia caused by inhaling water droplets containing legionella bacteria and, when left untreated, can cause fatal neurological complications.

Authorities have determined the clusters are not connected, but that they’re trying to identify the total number of people who may have been exposed.

The news comes just a month after a wedding is being investigated as the possible source of a Legionnaires’ outbreak that sickened after six residents in Champaign County in central Illinois.

According to Patch, the Walmart in Johnsburg was identified as the site of the first cluster after public health officials saw a slight increase in cases of Legionnaires’ in September.

Three people who said they shopped at the store were diagnosed with the lung infection.

Shawn Estoque, who has lived at the nursing home since June, told WGN 9 that he saw signs telling residents not to use the water for bathing.

However, allegedly no staff at the nursing home had informed the other residents about the Legionnaires’ diagnoses prior to a news crew interviewing them.

‘This the first time I’m hearing this, from you guys,’ he said. ‘I knew we couldn’t use the water. I didn’t know it was that serious.’

A spokesperson told the station that the nursing home notified the relatives of those infected and that pamphlets about the disease will be distributed throughout the facility.

Unlike other illnesses which are transmitted by person-to-person contact, sufferers fall sick by inhaling small droplets of water with legionalla bacteria.

The bacteria can multiply in places such as hot tubs, water tanks and large plumbing systems.

Symptoms develop between two and 10 days after inhaling legionella bacteria. The disease typically begins with a headache, chills, high fever, and muscle pain. 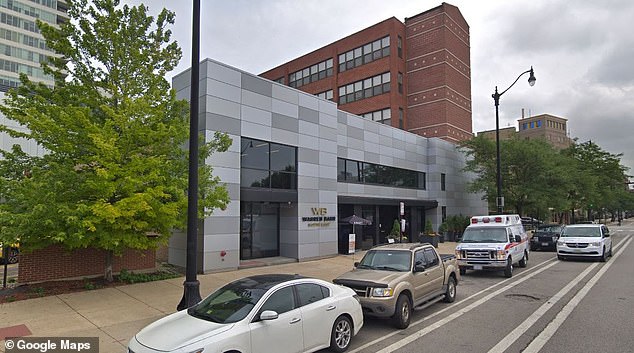 The second cluster was identified at the Warren Barr South Loop nursing home in Chicago, where two residents were diagnosed with the disease

Most people recover with antibiotics, but those with weakened immune systems or who have chronic lung diseases can form neurological complications that can be fatal.

Walmart issued a statement on Friday saying it had taken action including turning off the produce water sprayers.

IDPH is currently investigating a few outbreaks of Legionnaires’ disease. The first occurred last month after six residents of Champaign County were diagnosed.

Health officials are trying to pinpoint the source of the outbreak, including a church where the patients attended a wedding.

The second case is at the Illinois Veterans Home in Quincy, where a 2015 outbreak of the disease killed 14 people and sickened dozens more.