Two coalition personnel were killed and five others wounded on Thursday night by a roadside bomb in Syria, in a rare attack since the U.S.-led coalition sent troops into the war-torn country.

A U.S. defense official has said one of the two troops was an American.

The official, who spoke on condition of anonymity because details had not yet been publicly released, did not give the nationality of the second military member.

The U.S. military did not say where the incident occurred but it came hours after a local Syrian official said that an improvised bomb exploded in the tense, mixed Arab-Kurdish town of Manbij that is not far from the border with Turkey.

Manbij is under threat of a Turkish military operation. Ankara says Syrian Kurdish militiamen it views as ‘terrorists’ and an extension of Kurdish insurgents inside Turkey is in control of the town.

Two coalition personnel were killed and five others wounded on Thursday night by a roadside bomb in Syria. U.S. troop’s humvee is pictured passing vehicles of fighters from the U.S-backed Syrian Manbij Military Council 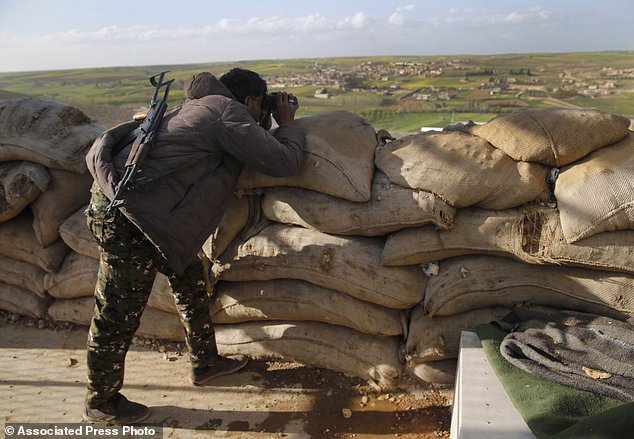 A fighter from the U.S-backed Syrian Manbij Military Council looks through his binoculars to Turkish-backed fighters’ positions, at the front line of Halawanji village

‘There is an investigation under way to identify who they could possibly be. We have our initial assessment and thoughts on that but we won’t provide until the investigation is complete,’ he said.

Dillon at first refused to give the nationalities of the dead and wounded as well as the location of the attack until next of kin notification.

He said the coalition has had fatalities in Syria before. ‘Perhaps by different means but there have been coalition deaths in Syria over the course of three years.’

Mohammed Abu Adel, head of the Manbij Military Council, an Arab-Kurdish group in the town backed by the U.S., said the bomb went off hundreds of yards from a security headquarters that houses the council just before midnight on Thursday.

Earlier on Friday, Dillon said an incident involving coalition forces was reported in Manbij but said no more information was available.

The town has seen a number of small explosions, protests and an assassination attempt on a member of the Manbij military council in recent weeks. Local officials blame Turkey and other adversaries for seeking to sow chaos in the town that was controlled by Islamic State group militants until the summer of 2016. 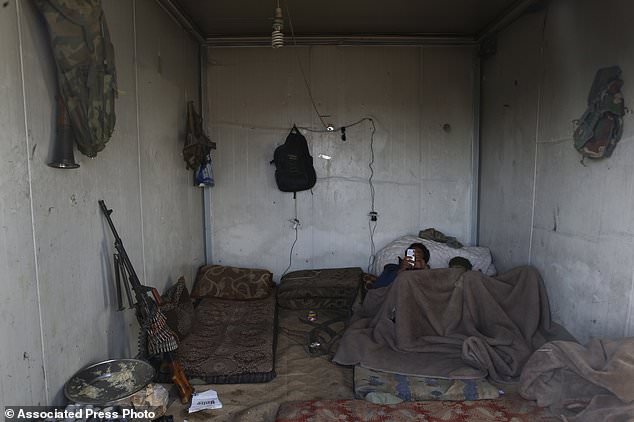 Fighters from the U.S-backed Syrian Manbij Military Council rest on their kiosk at a front line position against the Turkish-backed fighters at Halawanji village, north of Manbij town, Syria 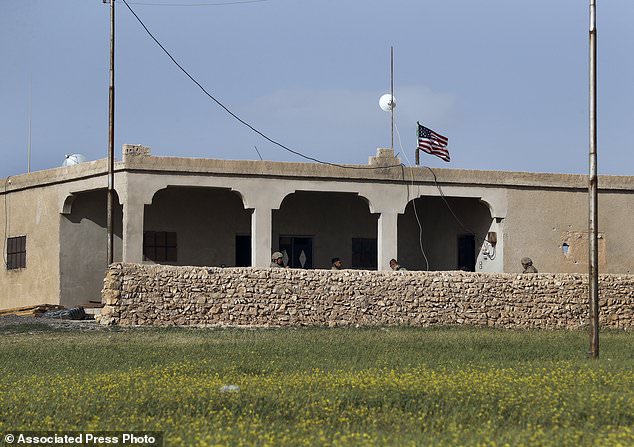 The front line has grown more tense in recent days as Turkey threatens to advance on the town to clear it of the U.S-backed fighters

The military council has since been in control and U.S. troops patrol the town and area with troops based nearby.

Meanwhile, near the capital Damascus, there were conflicting reports on whether a main rebel group will evacuate the largest and last rebel-held town in the area, known as eastern Ghouta.

Col. Gen. Sergei Rudskoi of the Russian military’s General Staff said at a Friday briefing that the agreement envisages Army of Islam rebels and their families leaving the Syrian town of Douma, just outside of Damascus. 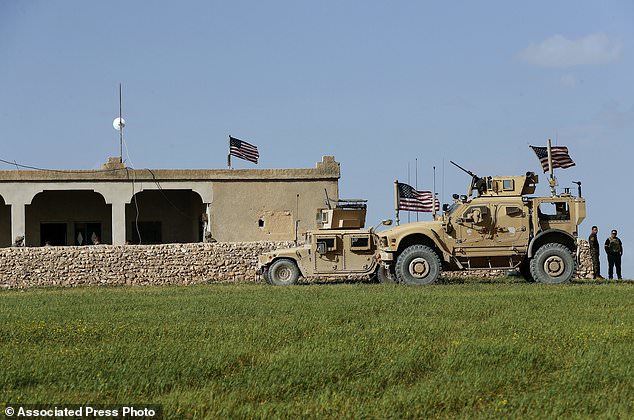 U.S troops have increased their patrols in the area, local commanders say, to prevent an outbreak of fighting and to prevent Turkey from advancing on Manbij 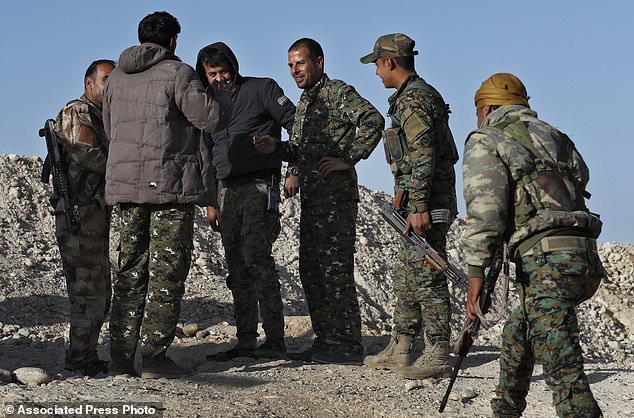 Commander Abu Ali Nejm, third from right, speaks with his fighters at the front line against Turkish-backed fighters

The announcement came after the Syrian government on Wednesday issued a three-day ultimatum to the Army of Islam group to leave Douma or face an all-out offensive.

Syrian state TV said an agreement is about to be reached for an Army of Islam evacuation but the group denied the reports.

Army of Islam military spokesman Hamza Bayraqdar told The Associated Press that the reports are false, adding that his group’s stance is to reject displacement and demographic change in eastern Ghouta.

The Syrian government and the Russian military backing it have demanded that Army of Islam members leave the area for northern Syria, following other rebels who left eastern Ghouta.

Rudskoi said over 143,000 people, including 13,793 rebels and 23,544 members of their families have left eastern Ghouta. He also said some 40,000 residents have returned to their homes in eastern Ghouta as there has been no fighting over the last seven days.