A British man has died at a luxury Costa del Sol hotel after plunging on top of a Spaniard enjoying a late-night drink on the terrace below.

The man he fell on, thought to be a local living in the upmarket resort of Marbella, also lost his life.

Police are trying to establish if the holidaymaker jumped or fell by accident.

A British man had died after he fell from the seventh-floor of the Melia Don Pepe Hotel in Marbella this morning. The Spanish man also died

The tragedy occurred at 1.45am this morning at the five-star Melia Don Pepe Hotel in Marbella.

Local reports have described the Brit as being aged around 50.

He is understood to have been on holiday with family.

The two men died instantly after the tourist plunged from the seventh-floor. 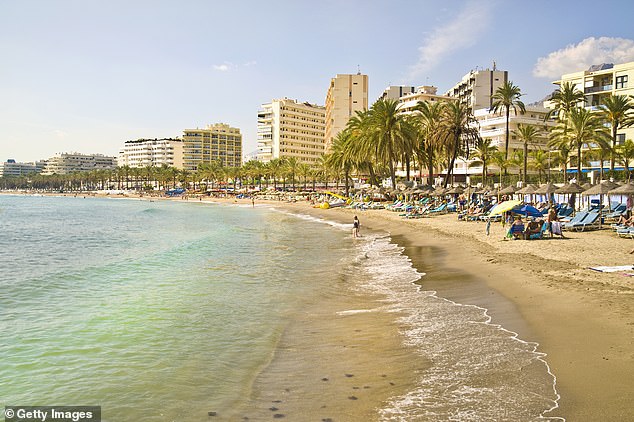 Police are investigating the incident to determine whether the man, believed to be aged around 50, fell or jumped

Staff at the hotel said they would not be making any comment.

National Police in Malaga, which is investigating, said: ‘I can confirm two men have died at a hotel in Marbella after one plunged from the seventh-floor and landed on top of another.

A well-placed sourced confirmed: ‘The man who jumped or fell is a British man aged around 50. The man who was enjoying a drink on the hotel terrace below him is a 43-year-old Spaniard.’