Two dogs were found locked in ‘oven-like’ temperatures inside a car while their owners spent hours out at a theme park.

Police were called to the carpark of the Gold Coast’s Wet’n’Wild amusement park at around 2pm on Wednesday – later learning the dogs had been stuck in the scorching hot car since that morning.

After attempting to track down the pets’ owners from inside the water park, police were left with no other choice then to smash the car’s windows and rescue the animals.

‘The car was like an oven. If not found in time, they wouldn’t be alive,’ RSPCA inspector Ben Newman said.

Confronting footage shows one dog lying on its side and panting desperately in the back seat.

Another was also seen pulled from the car and given water immediately.

Mr Newman said one of the dogs wasn’t showing any signs of life.

‘It was panting and laying down on its side, not responding,’ he said.

‘That’s when the decision was made to enter the vehicle due to concerns about the dog’s imminent welfare.’

Both dogs were checked over by a vet and were found to have no other obvious signs of health issues other than heat stroke.

‘These dogs were very lucky to survive,’ Mr Newman said. 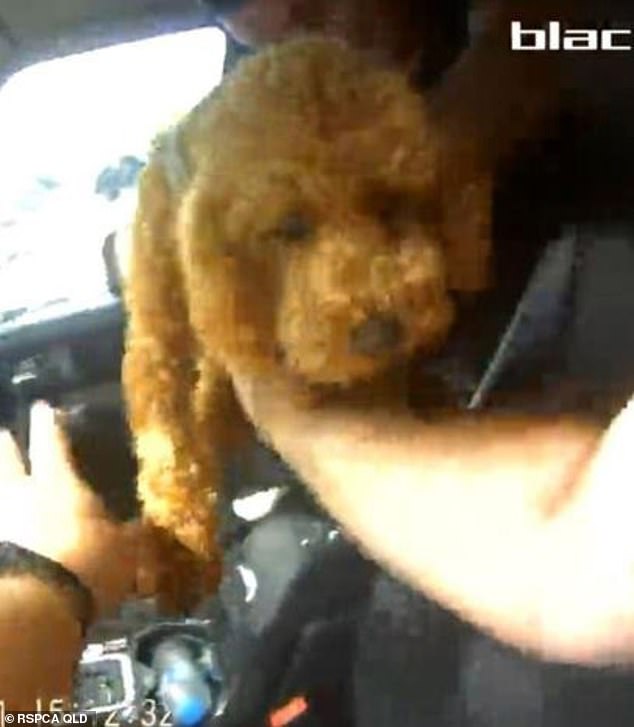 ‘We’re incredibly thankful to the members of the public for reporting these cases to us so we can help the dogs in time.’

Police had received a call from a member of the public who spotted the dogs trapped inside the car.

Despite calls over the theme park’s loudspeaker, the owners didn’t show up until after police freed the dogs.

No charges were laid against the owners and the two dogs were handed back to them.

‘We gave them a slap on the wrist on this occasion as there’s no history of them offending previously,’ Mr Newman said.

‘They were super remorseful.’