No partner? No problem: Female eagle rays Nibble and Spot give birth to pups despite not being in contact with a male for TWO years

Two female eagle rays have given birth to pups at an aquarium despite having no contact with a male in two years.

Nibble and Spot gave birth at the same time as each other on New Year’s Eve without a male companion, intriguing aquarists and scientists.

The two females reside in the Fish Tunnel display at SEA LIFE Kelly Tarlton’s Aquarium in Auckland, New Zealand, which currently does not house a male eagle ray.

Aquarium staff are trying to work out whether the pups were conceived through a process called parthenogenesis known as a ‘virgin birth’ or by sperm storage. 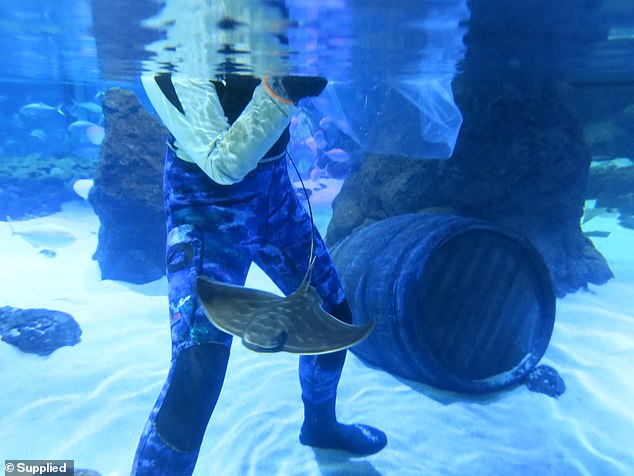 Female eagle rays Nibble and Spot both gave birth at exactly the same time, which came one year to the day Nibble had last given birth. Pictured is one of Nibble’s pups from last year

‘Whilst we were surprised to see Nibble and Spot give birth to pups because they haven’t been with a male in two years, it’s not completely unheard of,’ Andrew Christie, Curator at SEA LIFE Kelly Tarlton’s, told Daily News.

‘It could have occurred through a process called parthenogenesis, which is a rare reproductive strategy where an embryo develops without fertilisation.

‘Alternatively, Nibble and Spot could have stored sperm inside their bodies for the last two years.

‘Sperm storage has been recorded in several shark and ray species, so we think this is the more likely scenario.’ 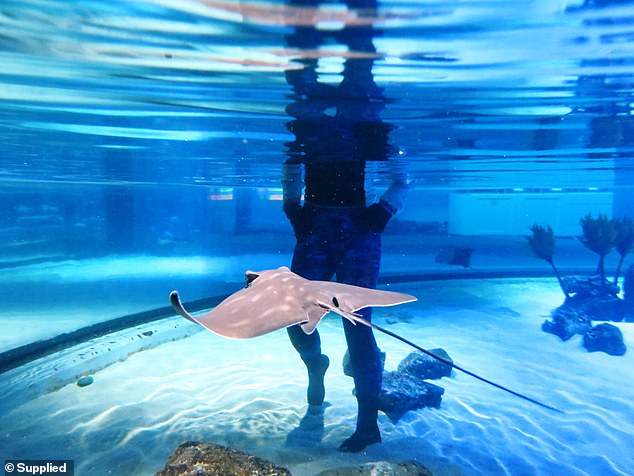 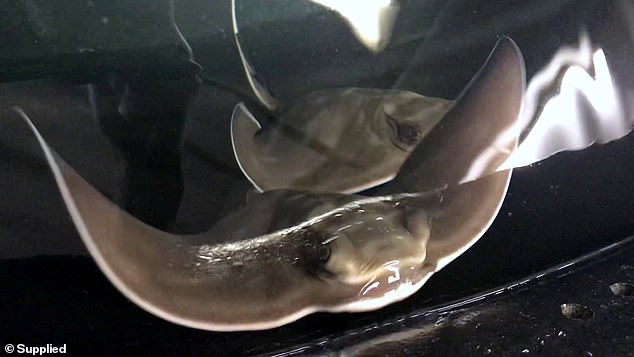 – Eagle rays are a type of cartilaginous fish with skeletons made of cartilage instead of bone as well as wide, flat snouts like a duck’s bill

Adele Dutilloy, a fisheries modeller at the National Institute of Water and Atmospheric Research, believed if the two females had stored sperm, it would be the first such time that had been documented in eagle rays.

‘The only way you can really confirm it for sure is through genetic testing… It would be a really cool thing to do, because it’s never been looked at before,’ she told The Guardian.

The pups are currently not on display at the aquarium, instead staying behind-the-scenes where they are being fed mussels and fish fillets.

While they are born with barbs they are still vulnerable to larger fish when they are young because of their small size.

Nibble also gave birth on New Year’s Eve in 2019, with those pups on display at the aquarium’s Turtle Bay.

In 2018, Freckle, a female eagle stingray at Sydney’s SEA LIFE Aquarium, managed to give birth to a baby despite not coming into contact with a male for nine years.

Freckle – one of the park’s main attractions due to the array of white dots found on her back – threw her tail up to conventional pregnancy and instead chose to do it alone, opting for parthenogenesis.