Two former soldiers have been arrested for the double murder of a husband and wife who were killed and robbed in Florida during a gun sale.

Serafin ‘Danny’ Lorenzo and Deana Lorenzo were found dead in a parking lot near the Galleria plaza in Estero, Florida in April last year, NBC2 reported.

Danny, 53, had been shot seven times and his wife Deana, 51, had eleven bullet wounds, court documents revealed at the time.

Alex Zwiefelhofer, 22, and Craig Lang, 29, have now been accused of robbing and murdering the couple in order to get money to travel to Venezuela.

Danny and Deana had traveled to Lee County in order to buy guns from the soldiers after responding to an online advertisement from a man ‘named Jeremy’, a federal indictment said.

The couple had withdrawn $3,000 in cash for the purchase of four Glocks, two 9mm pistols and nine high-powered rifles, the Washington Post reported.

It is believed the soldiers then lured Danny and Deana to the Galleria parking lot, where they were robbed and killed.

The pair, who had both been discharged from the military, hoped to ‘participate in an armed conflict against the Bolivarian Republic of Venezuela’, a federal criminal complaint revealed. 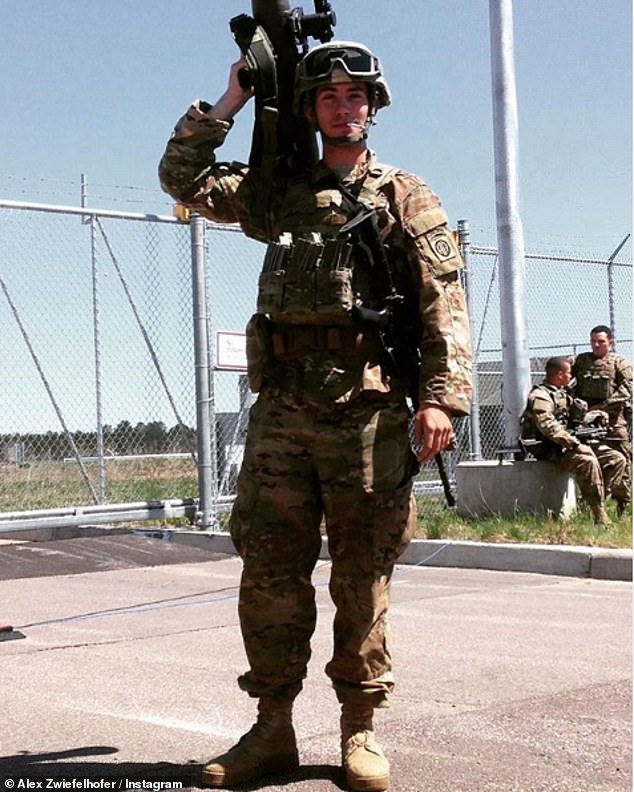 Danny, 53, had been shot seven times and his wife Deana, 51, had eleven bullet wounds, court documents revealed at the time (Pictured: Alex Zwiefelhofer)

They allegedly wanted the $3,000 in order to fund their journey, and had every intention of taking the guns with them.

Zwiefelhofer and Lang had reportedly been previously detained by Kenyan authorities after they tried to enter South Sudan in 2017.

When interviewed by a Customs and Border Protection officer, Lang said he the pair fought with the ‘Right Sector’ – a Ukrainian nationalist paramilitary movement.

The FBI is now hoping to to extradite both men back to Florida.